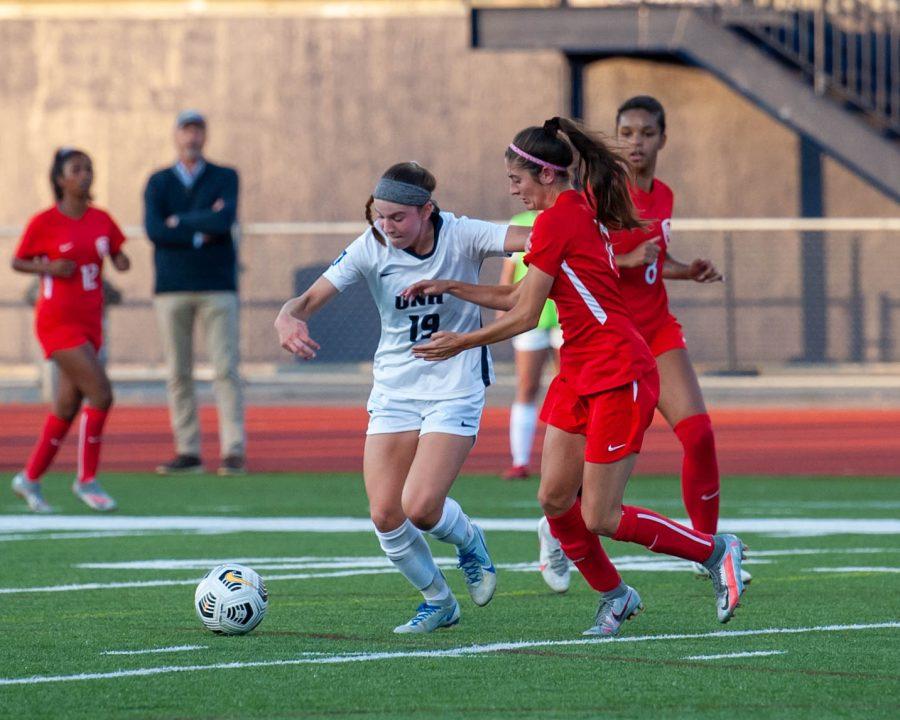 WEST HARTFORD, CONN. — University of New Hampshire (UNH) women’s soccer (2-5-1, 0-1-0) was unable to remain perfect in America East openers under head coach Steve Welham, losing 2-0 to the University of Hartford (6-1-1, 1-0) and getting shut out for the fourth time this season.

Another sluggish offensive outing doomed the Wildcats. They could only muster a pair of corner kicks and two of shots-on-goal that were both shoved aside by Hartford’s fifth-year goalkeeper Maia Perez.

Sunday also extends a streak in which UNH scores only one goal or less with the only exception being the season opener, Aug. 19 when they scored three goals against Merrimack College.

In a game of few chances for UNH, none were perhaps better than first-year forward Meghan Guarente’s volley from 30 yards out. Following a bounce, the ball found Guarente who fired it towards the middle of the net. Perez pounced on the shot, snagging it between her two gloves for her first save of the afternoon.

Welham credited Hartford’s ability to control the ball and slow the game down as reasons for another scoreless game for the team.

For the ‘Cats to reach the heights they believe they’re capable of, Welham believes they need to improve their execution, obtain better chances on goal, and incorporate more combination play in the midfield leading to the attack.

One area the team won’t look to change things is their starting lineup. Welham added there hasn’t been any consideration of incorporating other players into the lineup. Rather, he and the coaching staff have confidence in the starting 11 they’re putting onto the pitch.

“We just need to stay the course,” Welham stressed. “It’s frustrating because there’s not a lot of things that are wrong. It’s just that we need to strengthen the areas that we’re doing well, to make it better and more impactful. And once we do that the results are going to start to drop into our favor.”

UNH’s usually sure-handed senior goalkeeper Cat Sheppard made a pair of costly mistakes on Sunday afternoon that ended up with the ball in the back of the net.

Following a corner, Hartford’s junior defender Doireann Fahey placed a crosser to Sheppard’s far side. Sheppard hurried over, joined the swarm, and soared up to block the ball. Instead, she came up empty leaving the net vacant. The ball found the feet of sophomore midfielder Christina Stone who tapped it into the net for Hartford’s first goal of the game.

15 minutes into the second half, Hartford struck again. This time, Sheppard attempted to clear the ball away from the ‘Cats net. Hartford’s sophomore forward Chloe Layne blocked the lane, however, reversed and kicked the ball into an empty net to double the lead.

“Both goals were highly preventable. That was either one, lack of communication or decision making that were unfortunate lapses in the game and we, unfortunately, got punished in those moments,” Welham described.

Sheppard’s lone save of the afternoon was a beauty, coming 13 minutes into the first half. Following a deflection, sophomore Kelly Severini scorched the ball from the penalty arc. Sheppard skied into the air, punched the ball off the top crossbar, and collected it. Her 1.090 goals-against-average is fourth in the conference.

UNH’s fifth-year senior and co-captain Francesca Picicci made her return to the pitch after missing the last two games due to injury. Picicci tallied 35 minutes but failed to register a shot-on-goal.

While Welham said Picicci was struggling with the pain, he went on to say that even at 70% she still brings invaluable intangibles that the team can benefit from.

The Wildcats will conclude their four-game road trip Sunday, September 26 when they face the University of Albany (1-5-1, 0-1-0) for a 2 p.m. kickoff.