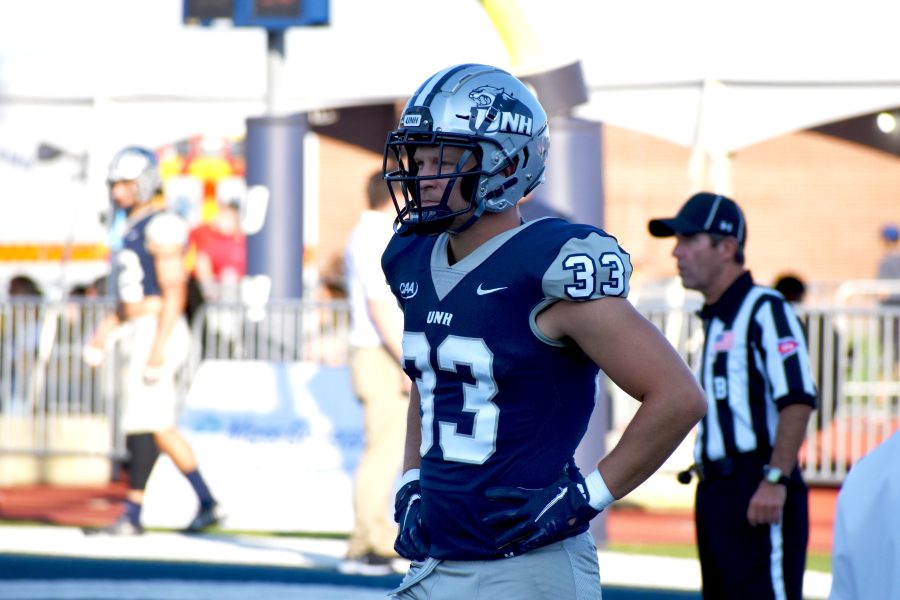 DURHAM, N.H. – It was going to take a complete defensive effort for the Wildcats (2-0, 2-0) to take down the Towson Tigers (1-1, 0-1) Saturday night and that’s exactly what they got. University of New Hampshire (UNH) was aided by upward of 10,000 fans inside Wildcat Stadium; however, after three missed field goals by redshirt junior kicker Jordan Conn, the true insurance came from senior safety Evan Horn in the 26-14 win.

The UNH secondary gave the tandem of Towson quarterbacks fits all night, collecting four interceptions along the way. These helped the Wildcats keep a comfortable lead throughout the game despite leaving 13 points on the board on five failed special teams conversions.

Horn took his turn as the defensive star in week two after senior Pop Bush took the crown a week ago. The captain pitched in on eight tackles, reeled in two interceptions and had three pass breakups.

Each of Horn’s interceptions served as monumental momentum shifts in favor of the Wildcats. The first one came on a deep ball attempt by redshirt senior Chris Ferguson. The pick led the Wildcats to a quick three-play drive ending in a 32-yard scamper for sophomore Dylan Laube into the endzone.

The second came as the Wildcats led 20-7 with less than two minutes remaining until halftime. The Tigers had been marching, quickly gaining 41 yards on eight plays in less than 60 seconds. Horn found himself in the right place at the right time ending what had been Towson’s second-longest drive at that point in the night and keeping the UNH lead at 13.

UNH has now forced nine turnovers through two games and Horn says, “that’s a pretty good average in my book, so we’ll take it.” He went on to comment on the importance of turnovers in games like this.

“When you get a turnover especially in a home game like this the tides can change. It’s a confidence booster for the offense as well,” explained Horn. “It’s a huge part of the game, and usually when you win the turnover battle you win most of the games.”

The offense has also shown big-play ability with sophomore Bret Edwards under center to this point. The Wildcats average the third most yards per play on offense within the conference behind No. 3 James Madison University (JMU) and No. 12 Villanova. Twenty-two, 24 and 54 yards were the long receptions of the night for three UNH wide receivers.

Edwards linked up with senior wideout Sean Coyne on a 54-yard score late in the second quarter to extend their lead to 20-7. Edwards found similar success the week prior when he hit senior Brian Espanet for 64 yards to build up a 27-0 lead.

The sophomore quarterback ended his first start in Wildcat Stadium throwing 24-for-32, 261 yards and two touchdowns.

The offense hasn’t shown consistency through a full four quarters yet, but the home run plays on both sides of the ball have kept them undefeated through two games.

The consistency also hasn’t come from the kicker position this season. Conn won the job in the spring and once again this summer and head coach Sean McDonnell spoke very highly of him ahead of the season. A tough night on Saturday, however, could have the longtime head coach giving a little extra thought as to who will be teeing it up in week three.

Conn missed a pair of field goals from 46 yards and one from 35. The Wildcats also failed to convert two different two-point conversions on their first and last touchdowns of the night. Conn, who had begun the night on kickoff duty as well, relinquished his spot by the fourth quarter as redshirt first-year kicker Sean LeHane took the final kickoff of the night.

This win sent the Wildcats into the Stats Perform Top 25 for the first time this season as they were slotted in at No. 23.

The victory also notched McDonnell’s 100th Colonial Athletic Association (CAA) win in his career. McDonnell sits in third place all-time behind Andy Talley (142) of Villanova and is on the heels of Jimmye Laycock (111) of William & Mary. McDonnell is the only active coach among these three.