UNH field hockey: Wildcats fall to 1-3 after losses to BU and No. 3 Iowa 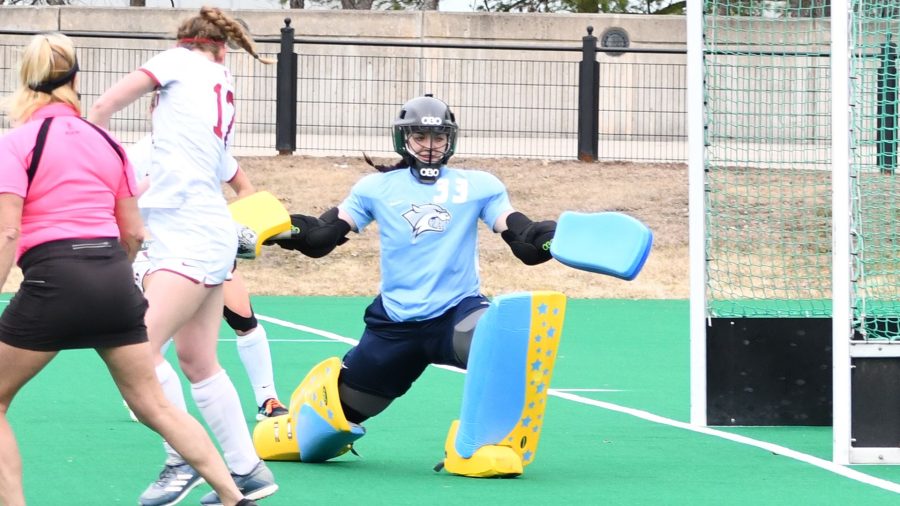 In their 3-1 loss to BU, junior Jaiden Wittel scored her first goal of the season which was the team’s only tally of the night. This was Wittel’s first goal since September 15th, 2019, when she scored the game-winner against BU.

The Terriers threw four shots at the net, three of which got behind UNH junior goaltender Jemma Woods, who was the reigning America East Defensive Player of the Week. UNH was able to manage three shots on net against the BU goaltending duo of junior Caroline Kelly and sophomore Kate Thomason.

After the game, UNH head coach Robin Balducci was asked about her team’s performance.

“I’m pretty happy with our overall performance,” Balducci said. “They got a second goal but then we chipped away. Our players who played great for us, Bloem [van den Brekel] and Lindsay [Lee] were outstanding in our backfield. We had some chances and we just didn’t finish. Great possession time. Played well. Moved the ball. Just falling short in getting corners and shots.”

UNH’s offense was fairly quiet the entire game; however, junior Ava Mariani was able to manage two of the team’s five shots against the Terriers.

The following day the Wildcats took on the No. 3 Iowa Hawkeyes. Despite a hard-fought battle, the team dropped the game by a score of 3-0.

Despite the second loss of the weekend, Balducci remained positive about the team’s outcome and explained some of the team’s objectives for playing these out of conference games against difficult opponents.

“Similar to the Louisville game last week, our goal was to step up to the challenge of their depth and ability and I thought we did a good job,” Balducci said. “We held them for a bit after they scored an early goal. We tightened things up.

She continued, “our goal these two weekends was to challenge ourselves at a high level for the return down the road and prepare us as we get ready for conference play.”

The Wildcats were led by another impressive performance by Woods, who stood on her head matching a career high in saves with 11 which she previously did at the University of Maine on March 28th of this spring. This was Wood’s fifth game of her career where she registered 10 or more saves in a game, as well as the second this season.

UNH’s offense was once again held off tightly by the opponent’s defense; however, van den Brekel rifled a shot on goal in the 22nd minute that required Iowa’s senior goalie Grace McGuire to make a challenging save.

Iowa dominated in shots (18-2) as well as shots on goal (14-2). After the loss, UNH fell to 2-14-1 against Iowa in program history, which includes a loss in the 1986 NCAA national championship game, which the Hawkeyes won 2-1 in double overtime.

As for the Wildcats, they will look to turn around their three-game losing streak as they remain on the road this week with their only game coming against Providence College on Friday. The team then has their final game of this six-game road trip against Bryant on Friday, Sept. 17 before the return to Durham for the home opener against Boston College Sunday, Sept. 19 at 12 p.m.