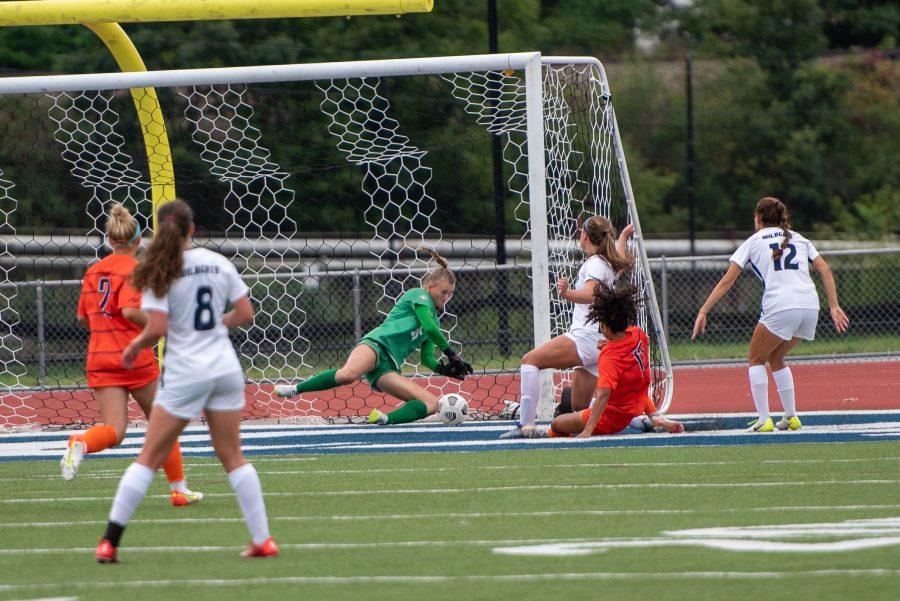 Though the stat sheet will tell a different story, with UNH only registering two shots on net, the Wildcats had plenty of quality scoring chances through 90 minutes.

One of their finest chances came via a free kick from sophomore defender Alivia Kelly, who launched the ball towards the goal. A teammate leaped into the air and headed it into the net. The crowd came to life under the pretense of a goal. The outstretched arm of a referee signaled otherwise as UNH was offside, erasing the tally off the scoreboard.

Later, the Wildcats had a pair of breakaways but failed to cash in each time. The first found first-year forward Abbie Burgess, but the ball skipped past her before she could get a shot off. The second saw Burgess intercept a pass at just passed midfield with only the goalie to beat. As Burgess barreled into the final third of the field, Syracuse’s fifth-year senior goalkeeper Lysianne Proulx met her and redirected the ball to a teammate who skied the ball out of danger.

Despite now being shut out in three of their last four games, UNH head coach Steve Welham continues to stress the process over results for his team.

“There were clear cut opportunities to score, and it just didn’t go that way,” Welham said. “The encouraging sign is that we are creating these opportunities. The final piece is execution and putting them in the back of the net.”

Defensively, it was a fine game for the Wildcats. Syracuse was held to eight shots and seven corner kicks while senior goalkeeper Cat Sheppard made six saves.

Her largest came 20 minutes into the match. Following an altercation in front of the Wildcats net, Syracuse’s senior midfielder Telly Vunipola was awarded a penalty kick. Vunipola wasted no time and fired a shot low on Sheppard’s near post, but the senior goalkeeper read the shot beautifully and blocked it with her outstretched hand to preserve the stalemate.

“I knew she was going to the left as she opened up her hips. Last-minute, I just sent it and hit my hand and went out,” Sheppard explained.

The ‘Cats defensive play not just on Sunday, but on the whole season is something Welham is continually encouraged by.

“We’ve always prided ourselves on defense and being organized, sound, and fit. It makes us be in any game that we play, there’s no question,” explained Welham.

Sheppard was unable to keep the game scoreless in the 71st minute, however. Syracuse first-year defender Kylen Grant got behind the Wildcats defense, deked past a defender, went low post, and watched as the ball ricocheted off Sheppard’s ankle and into the net.

“[It was] kind of a broken play. I thought Alivia [Kelly] had it, and then they cut back inside and hit it right on my ankles,” Sheppard said.

After beginning the season with the same starting lineup for the first four games, the Wildcats have begun to make changes. Last game it was sophomore Anna Hewlett replacing first-year forward Meghan Guarente who’d started every game prior. On Sunday, however, Guarente returned and replaced sophomore Keegan Mayer.

Welham explained the switch was made due to the staff’s comfort with Guarente’s versatility, her speed, and her ability to put the ball in the back of the net. Something the Wildcats saw in the first game of the season when the first-year player notched a goal and an assist.

He also said that Mayer’s benching will allow the team to deploy her in numerous positions as a spark plug off the bench, especially on the left side of the field where she’s a natural fit.

UNH will hope to break their winless streak as well as their six-game road losing streak when they travel to Siena College (2-3, 0-0) on Thursday, Sept. 9 for a 3 p.m. kickoff.