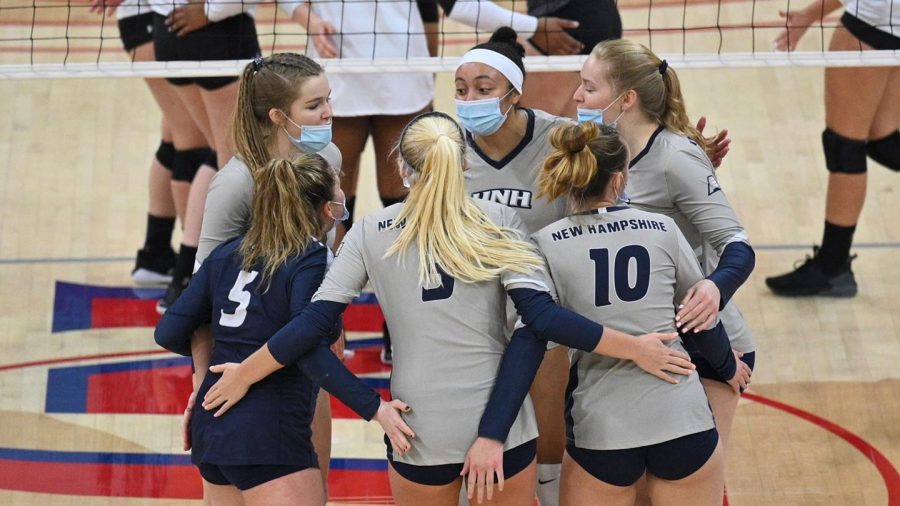 The University of New Hampshire (UNH) volleyball team opens their season against Murray State University in Macon, GA Friday afternoon at the Mercer Tournament. There is a lot of excitement surrounding the team this season. The Wildcats tied for second place in the America East Preseason Poll. They finished last year on a high note winning their last five games en route to a 7-3 record.

The Wildcats lead the conference in digs per set (17.7), service aces per set (2.2), and kills per set (13.77) last season. The numbers show that this group was an exceptional offensive and defensive team that has the potential to do a lot of damage in a longer fall 2021 campaign. Third-year head coach Christopher Feliciano expects the team to be “extremely gritty this year with a blue-collar type of work ethic that’s representative of UNH.”

The Wildcats are returning 15 of their 16 players from a season ago when they were a couple wins away from being in the conference final.  Feliciano has put a real focus on unity and teamwork this go around after getting so close to the championship a season ago. The head coach has been pleased with the interactions between all the players to this point.

Feliciano noted that 100% of the team has received the Coronavirus (COVID-19) vaccine which has “allowed [the team] to have different encounters with each other which have been tremendously positive.”

Last week, the team named senior outside hitter Kate Bilyeu, junior right side hitter Hannah Crist, and junior setter Wren Macaulay tri-captains for the upcoming season. Bilyeu served as a co-captain last year in a strong campaign in which she posted 65 kills, 76 digs and 11 service aces. Hannah Crist set a new career high with nine kills against NJIT last season, and she also had three matches of at least three blocks. Wren Macaulay is taking over as the primary setter this season and she ranked second on the team in assists last season with 101. The captains for the fall 2021 season were selected by their teammates.

The sky is the limit for this veteran team as they strive for a possible first place finish. They have put together back-to-back second place finishes under Feliciano who has a record of 24-13 in two seasons. He made his goal for the team this season very clear.

“We want to put one foot in front of the other,” said Feliciano. “We’re really focused this year on our dynamic relationships and playing the game together.”

The Wildcats return to Durham for their first home game on Sept. 2 against Fairleigh Dickinson at 7 p.m.