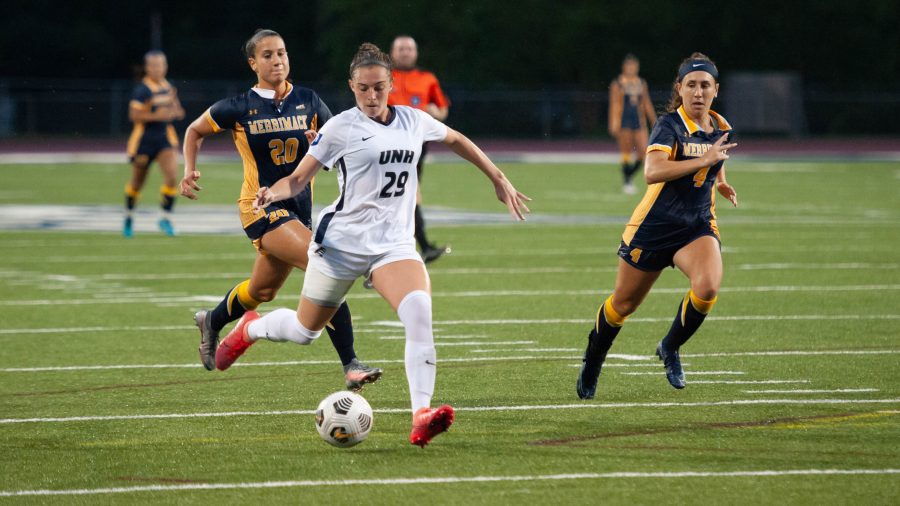 The University of New Hampshire (UNH) women’s soccer (1-0, 0-0) captured their first win of the season against Merrimack College (0-1, 0-0). The Wildcats were led by a strong effort from their first-year starters along with star senior goalkeeper Cat Sheppard.

First-year forward Abbie Burgess broke the stalemate five minutes into the game. Fellow first-year Meghan Guarente passed the ball to Burgess who turned on it using her right foot. Burgess sent the ball spiraling toward Merrimack goalie Claire DeFlora who failed to keep the ball out of the net despite a dive.

Guarente notched a goal along with her assist 26 minutes later. Sophomore Alivia Kelly entered the Warriors zone before zipping the ball to Guarente, who gathered it with one foot before firing it toward the net. Once more, DeFlora dove to divert the ball’s path, but instead it found twine to boost UNH’s lead to two.

“It’s wonderful to see two freshmen step up in their debut,” said head coach Steve Welham. “You couldn’t ask much more for two freshmen in the first game ever.”

Burgess showcased plenty of talent in her debut, but it was her speed that stood out. The first-year athlete had three breakaways on the night. The first came with eight minutes left in the first, as she barged one Warrior and barreled from the 50 all the way to the Wildcat end line. Indecision cost the first-year player as DeFlora smothered the ball before she could get a shot off.

Her third came when Burgess ran past a pair of Warriors, claimed the ball just outside the box and fired it upon entry. The blast didn’t find the back of the net, instead, it smacked DeFlora right in her hands, sending the ball back into play to keep the Wildcats lead at three.

“Abby [Burgess] is one of the fastest players in the field, period. She’s incredibly fast with the ball, so that’s an area that can change a moment in the game,” Welham said. “She’s just scratching the tip of the iceberg right there. She’s got so much more to give.”

Speed is a core trait to what the Wildcats will bring to the pitch going forward Welham said.

“We want the ability to play at speed with the ball and be very dangerous and we really to just take it to the opposition for 90 minutes.”

Defensively, Sheppard stifled the Warriors throughout the match, making four saves to shut down the opposing offense.

One of Merrimack’s best offensive chances came 35 minutes into the second half. Merrimack junior midfielder Hallie Shiers took the ball thanks to a deflection off a UNH defender and aimed for Sheppard’s near post. In response, the senior netminder placed an outstretched hand that steered the ball out of bounds to keep the Warriors silenced.

Welham said that Sheppard’s level of play is a steadying force for the Wildcats, especially for her defensive teammates.

“It’s very reassuring I think for the backline knowing that if the ball does get past the 10 players in front of them, they know they have one heck of a goalkeeper to make that stop.”

Sheppard’s dominance in the net has become a norm for the Wildcats. Coming into the game, the goaltender has a 0.97 goals against average (GAA) through 20 games played. A mark that is best among all UNH keepers with a minimum of 2,000 minutes. With last night’s shutout – the sixth of her career – that GAA will only drop further.

Due to Tropical Storm Henri, UNH and Sacred Heart University will not play this Sunday as previously scheduled. The Wildcats will return to the field Thursday, Aug. 26 when they travel to Northeastern University for a 6 p.m. kickoff against the Huskies.