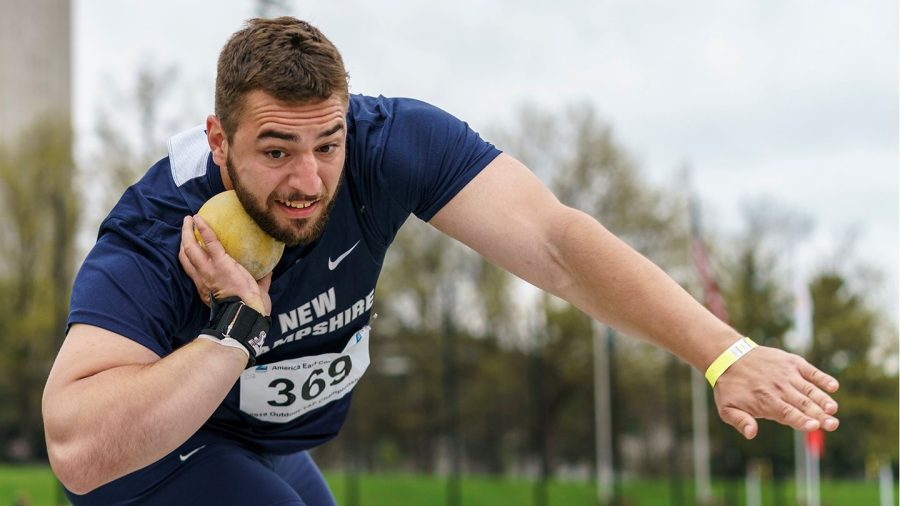 LOWELL, MASS. — The UNH women’s and men’s track & field teams traveled to Cushing Field Complex at UMass Lowell this past weekend to compete in the two-day American East Championships.

The women’s side did not see any first-place finishes Saturday but saw plenty in the top-five which got them to 46 points on the day. Some notable mentions were junior Lauren Quann who placed fourth for the ‘Cats with a throw of 132-8 feet in the javelin. Sophomore Danielle Heine earned a bronze medal in the pole vault with a jump of 11-1 3/4. First-year Wildcat Mia Taranko earned a fifth-place finish in the long jump with a jump of 18-3 3/4 feet. Junior Lauren Dean took fifth-place in the 3000-meter steeplechase with a time of 11 minutes, 15.62 seconds. Graduate student Meg Champagne led the ‘Cats in the 10,000-meter race with a time of 37:01.79 which was good enough for a second-place finish.

On the men’s side, they were led by graduate student Nicolas Sevilla-Connelly who won the 3000 steeplechase. Sevilla-Connelly has dominated this event all season as this is his third first-place finish in the event.

The ‘Cats also saw another great performance by junior Nate Hobbs in the long jump; he earned a second-place finish in the event with a jump of 24-7 1/4 feet. Both Sevilla-Connelly and Hobbs earned a team-high eight points in their events, helping them to get to their 39 points.

Other highlights came from junior Patrick Brogioli who took fifth-place in the hammer throw with a distance of 168-1 feet. Junior John King Jr. earned a fifth-place finish in the javelin with a throw of 183-9 feet.

During Sunday’s meet, both the women’s and men’s teams had worse days than expected. Coming into Sunday the women’s team was in first place with a total of 46 points but after Sunday ended, they fell one spot and finished in second place with 145 points. The men’s team came into the day with a total of 39 points and in second place. After Sunday’s meet was completed, however, the men fell two spots and finished in fourth place in the meet with 96 points.

For the women’s side, this marks the fourth time in the past five years that they have finished second place in the American East Championships. The highlight of the day for the women’s team came from graduate student Alyssa Colbert who broke her own school record for the third time this season in the discus throw with a throw of 169-2 feet. Colbert ended up finishing in first place in the event and won the gold. Colbert also won the silver in the hammer with a throw of 166-8 feet.

Other highlights during Sunday’s meet came from graduate student Bosibori Mosongo who earned a second-place finish in the heptathlon with 4630 points. First-year athlete Elizabeth Martell continued to dominate in her first year on the team as she earned the bronze in the 800.

The highlight of the day for the men’s team came from graduate student Zachary Astle who finished in first place and earned the gold in the shot put with a throw of 55-0.75 feet. Astle totaled 21 points during the weekend’s meet which was a team high.

The ‘Cats are scheduled to compete once again on May14-15 at the New England Championships, which will be held at Central Connecticut State University.