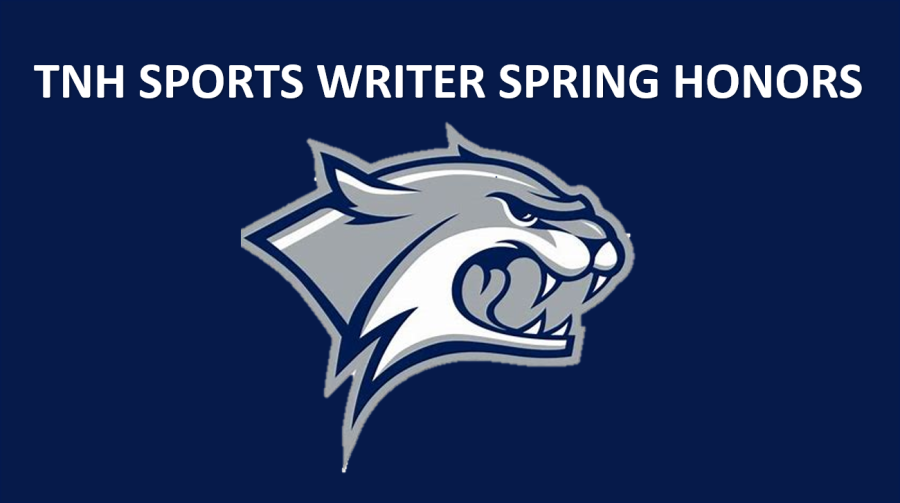 Player of the Year: Abby Sullivan

The University of New Hampshire (UNH) women’s volleyball team had a clear leader this season in junior middle blocker Abby Sullivan. Sullivan was sensational for the Wildcats all season leading the team in kills with 73, a hitting percentage of .347 and 25 blocks. Sullivan started the season on a tear garnering more than 10 kills in each of the Wildcats first four games. She was a force defensively starting eight of the nine total games for the Cats’ and recording a block in each of those games. Sullivan had a season high 12 kills against Stony Brook on March 14 leading the Wildcats to a win over the Seawolves. She was named to the America East All-Conference First Team in 2020 after making the Second Team in 2019.

“In our shortened season Abby played a critical role to our success.” He added, “she’s someone that commanded a lot of attention from opposing teams, which in turn made everyone around her better.”

She gave the Wildcats a player to build around heading into next season and Feliciano is happy to have her lead the team moving forward. He said her success is a credit to her work and she works as hard as anybody. She is undoubtedly the player of the year for the Wildcats and she’ll look to carry that success over to next season.

Rookie of the Year: Hannah Serbousek

Sullivan’s play helped elevate those around her one of which is first-year outside hitter Hannah Serbousek who was named to the America East All-Conference Second Team.

Serbousek was vital to the Wildcat’s success this year as she was one of four rookies named to the America East All-Conference Team. She also earned recognition from the conference by getting a spot on the All-Rookie Team.

Serbousek had more than 13 kills in three matches this year proving her dangerous ability to go up and get the ball at its highest point. She ended the season with 6o kills which was third on the team to go along with a .256 hitting percentage which was eighth-best in the America East.

Coach Feliciano gushed about her first season as a Wildcat.

“To make an All-Conference Team as a freshman is no small feat,” commented Feliciano. “As the season progressed Hannah continued to improve. Every day she came in with a specific focus. Our program is fortunate to have Hannah part of it.”

Serbousek was a big part of the 7-3 UNH team who earned second place in the regular season for the America East.

Player of the Year: Julia Neyland

Although the Wildcats boasted a talented starting lineup this season, nobody has been more effective to this point than senior midfielder Julia Neyland.

Neyland has played and started in nine games this season. With just one game remaining she has scored 23 of the team’s goals and dished out seven of their assists giving her 31 points on the season.

The senior has proven to be a valuable asset to the team in the majority of their games this season. She scored at least one goal in eight out of nine games. Neyland’s season is not finished yet as the Wildcats still have one game to play against Hartford in their season finale on May 1.

Rookie of the Year: Olivia O’Connor

UNH is in luck as they have already found themselves more talent for the future. First-year attacker Olivia O’Connor has shown the talent and potential to not only be the best newcomer on the team but one of the more productive players on the entire roster.

O’Connor has played in all ten of the games this season. In a recent game against Vermont, she recorded a goal and an assist to try and keep the Wildcats in the game before losing by a final of 13-9. This added onto her resume of four goals and one assist.

These numbers add up to five points which is the most among first-year Wildcats this season. O’Connor has one more game to help add to her promising rookie statistics. She will certainly be a great asset to the team in the coming seasons.

Player of the Year: Francesca Picicci

Despite the disappointing end to their season due to COVID-19, the University of New Hampshire (UNH) women’s soccer team (5-2, 2-2) had plenty of bright spots. The strange, condensed spring season couldn’t keep several Wildcats from bursting onto the scene or from reminding everyone how good they are. The ‘Cats had their best start in program history (4-0) and were undefeated at home (5-0). Senior captain Francesca Picicci was the team’s primary source for offense all season and a big reason they found such success this season.

Picicci had herself a year to remember in her senior season. The forward and captain tallied three goals, two assists and eight points for the Wildcats in just seven games. She started every game for UNH and netted a dramatic overtime winner against Maine in this year’s border battle. Picicci was voted to the America East All-Conference Second Team as well as the All-Academic Team. She was a constant workhorse for UNH on the field, and Head Coach Steve Welham described her as a grinder.

Rookie of the Year: Alivia Kelly

This season saw 12 first-year athletes dawn the blue and white for UNH. Among the newcomers, Alivia Kelly stood out. Kelly started every game in her first year in Durham. The center-back was a rock in the Wildcats defense, which kept in three games and only allowed more than one goal once all season. Kelly was everywhere on the field. She dominated from box to box and was a physical presence that opposing attackers seldom got past. She proved to be one of the most versatile weapons for the Wildcats.

Despite her position, she managed a winning goal on a header versus Northeastern in the first game of the year. She was also a regular free-kick taker and delivered dangerous balls into the box all season. Welham even brought the center back up the field to play striker on occasion when the Wildcats found themselves down late and in need of a goal. Kelly was awarded Second Team All-Conference and All-Rookie at the end of the season

Player of the Year: Alejandro Robles

The University of New Hampshire (UNH) men’s soccer has had a fantastic season winning their third consecutive America East (AE) Championship and advancing to the NCAA Tournament to play Kentucky Sunday, May 2. Throughout the season the Wildcats’ veterans like graduate student Paul Mayer, and seniors Linus Fallberg and Victor Menudier all stepped up in big moments when the ‘Cats needed them. Together that trio combined for 14 goals. But there was one player who consistently showed up time and time again. Grad student goalkeeper Alejandro Robles started every game this season and was one of the best players in the conference this season.

Through nine games this season Robles came up with 25 saves and put up an unblemished 8-0-1 record. Robles has been a key part to the Wildcat’s success this season only allowing four goals through 790 minutes of play.

Robles’ ability to remain calm between the pipes was vital to the ‘Cats being the best team in the America East. He came up with some outstanding saves during the AE Tournament. Robles led the America East in almost all of the goalkeeping categories, including shutouts, goals against average and save percentage. He tallied four shutouts, a goals against average of .456 and a save percentage of .862. Robles’ tournament performance helped the Wildcats claim their third America East title and got him a bid to the All-Championship Team. The grad student was also named the America East Goalkeeper of the Year for the second straight season.

Rookie of the Year: Yannick Bright

With such a talented roster the Wildcats didn’t have to put any of their young players in any uncomfortable positions. Coach Marc Hubbard allowed some of them to learn from the sideline but that wasn’t the story for first-year midfielder Yannick Bright who started all nine games for the Wildcats this spring. The Milan, Italy native was one of the team leaders in time on the field and helped maintain the midfield for the ‘Cats with 785 minutes of play. Bright rarely exited the game and only was sidelined in the last contest due to an injury.

Bright placed in the top-six on the team in points with four as of now. He scored his notch point against tough Northeastern squad back on March 6. He was able to tally the rest of his points and his lone goal of the season against the UMass Lowell Riverhawks on April 2. Bright quietly was one the Wildcat’s best players all season long and with a lot of time to grow and evolve as a player, his best days could be ahead of him.