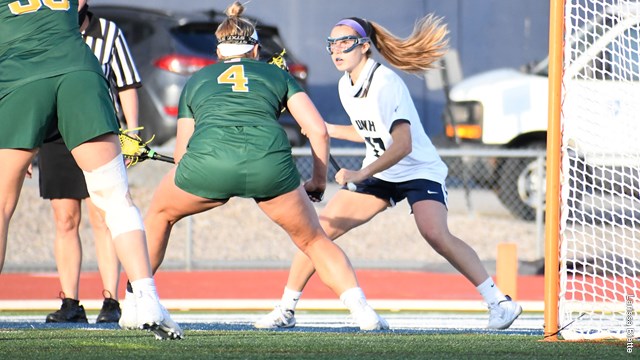 DURHAM, N.H. — Saturday night the University of New Hampshire (UNH) women’s lacrosse (3-6,2-5) hosted the University of Vermont (5-5,5-3) for their second home game in a row. This time the Wildcats were accompanied by fans in the stands. This addition was not enough to give them the win, however, as they were bested 13-9 by the Catamounts.

The first ten minutes of the game were silent until sophomore attacker Liv Dunn got things kicked off for the ‘Cats with help from first-year attacker Olivia O’Connor.

About two minutes later Vermont responded with an unassisted goal from sophomore midfielder Ava Vasile. Junior Riley Halloran assisted junior attacker Taylor Mullen with 12:21 to play in the half to give the Catamounts a 2-1 lead.

O’Connor scored UNH’s next goal in the 21st minute with help from senior midfielder Elizabeth Blanding to knot the score at two.

Vermont took over the rest of the first half scoring four straight goals. The first was an assist from sophomore McKenzie Ballard to junior attacker Dani Paterno. Next, redshirt junior midfielder Grace Giancola scored an unassisted goal.

The first half finished up with two straight unassisted goals by Vasile to bring the score to 5-2 in favor of the Catamounts.

Senior midfielder Julia Neyland scored the first goal of the second half with help from Blanding to cut the Wildcats’ deficit down to three.

About four minutes after, Vermont responded with two more goals. The first was scored by first-year midfielder Emily O’Connor with help from Vasile in the 36th minute. Halloran was assisted by Paterno two minutes later to make the score 8-3.

First-year midfielder Mackenzie MacEachern found graduate student midfielder Rylee Leonard for her first goal of the game with 19:47 to play.

However, Paterno assisted Halloran in the 44th minute and Mullen in the 48th. This put the Catamounts up by six with just above ten minutes remaining in the game.

The Wildcats finally showed some life as they scored back-to-back goals within three minutes of each other and less than nine minutes to play. The first was unassisted by senior midfielder Gabby Masseur and the second was scored by first-year midfielder Kailee Woods with help from Neyland.

With 8:23 remaining Mullen found Ballard giving Vermont a five-point lead. This was countered by UNH with an unassisted goal from Blanding just 19 seconds later.

Giancola and Paterno scored the final two goals for Vermont in the 58th and 59th minute. Paterno was assisted by senior midfielder Mackenzie Bolt bringing the Catamounts to 13 goals on the day.

UNH wrapped the game up with two goals with under a minute remaining. One was assisted by Neyland and scored by MacEachern and the other was unassisted by Blanding to make the final score 13-9.