The New Hampshire • May 2, 2021 • https://tnhdigital.com/18896/sports/former-wildcat-pop-lacey-signs-with-the-naz-wranglers-of-the-ifl/ 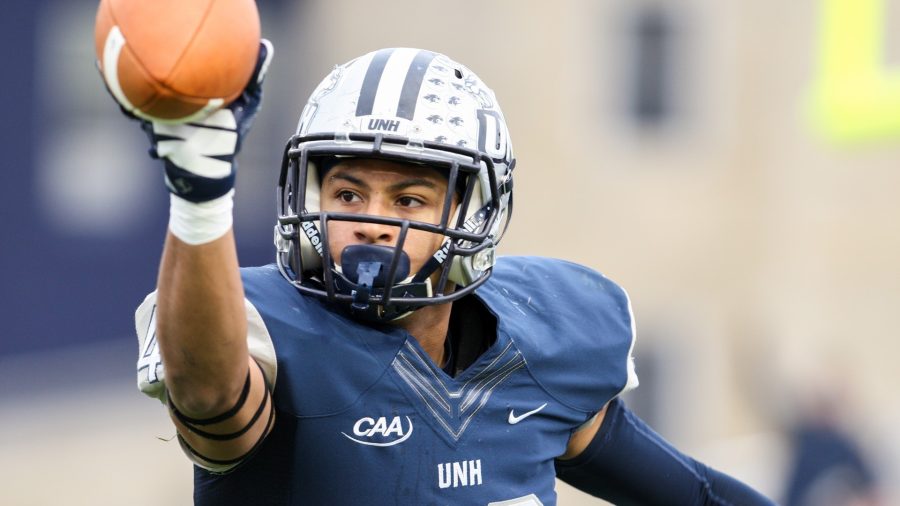 The last time Pop Lacey suited up was all the way back on Nov. 23, 2019 when the Wildcats defeated the Maine Black Bears 28-10 to take back the Brice-Cowell Musket. Today, Lacey is headed to northern Arizona for his first opportunity at professional football with the Northern Arizona Wranglers of the Indoor Football League (IFL).

Lacey was among the group of UNH players whose pro day was canceled a little over a year ago due to the coronavirus (COVID-19) pandemic. At the time he had been participating in virtual pro days and had hopes to be a training camp invite with an NFL club or receive a tryout in the Canadian Football League (CFL). While his opportunity didn’t come in the NFL, CFL or Extreme Football League (XFL), Lacey has finally gotten his first sniff from the IFL after a year of training.

In the meantime, Lacey has spent some time down in Florida staying in shape to try and make the most of his time while he could. He explained that after a player leaves college he generally has about two years before professional scouts will start to write them off. During his time in the Sunshine State, he had the opportunity to work out with one of the top high school recruits in the nation, Mario Williams, who is committed to Oklahoma University.

Lacey says that he’s heard from agents who think he has potential to play at the next level, whether it be the XFL, CFL or NFL. The CFL hasn’t been inviting unsigned players to tryouts, however, due to COVID-19 according to Lacey.

Since Lacey has been out of live action for so long, he explained how at this point he needs to rely on connections he’s made rather than his collegiate resume.

“It’s all about who you know, what you know, and how to get put in the eyes of these people,” said Lacey.

The former Wildcat is excited to finally have the opportunity to play competitively again after about 17 months away from the game.

“For me it’s a blessing. I’ve been out of the pads for so long and being able to play football was basically my therapy for a very long time,” said Lacey. “I haven’t been associated with a team since that Maine game in November 2019 so for me it’s very thrilling and very exciting. I’m ready to put the pads back on and hit somebody.”

The IFL’s spring season got underway on April 23 but Lacey is reporting for the Wrangler’s fall camp on May 1. The safety will know his status on the team by May 9. The Wrangler’s first game is on May 16 against the Arizona Rattlers.