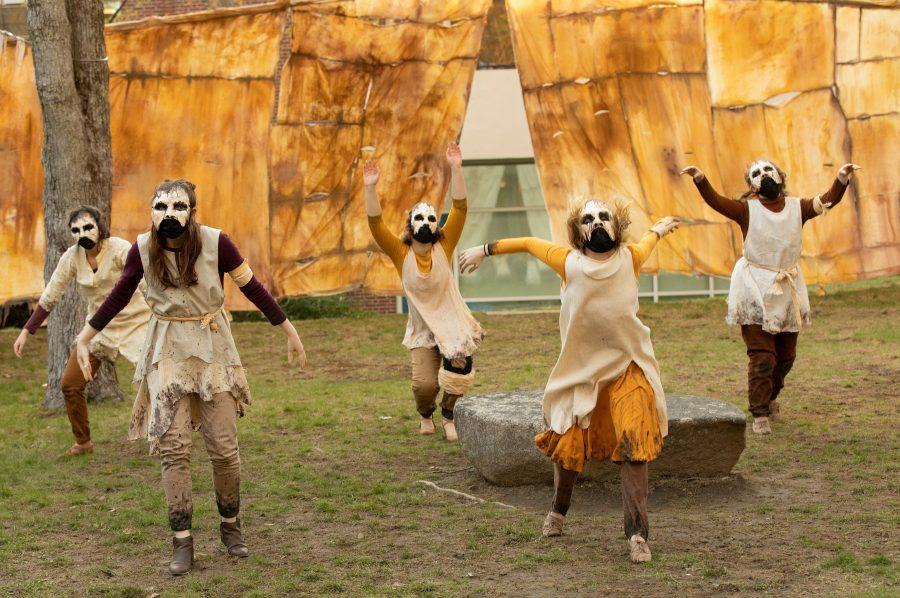 As May approaches, there is a newfound warmth in the air: warmth that comes with summer looming over the horizon, and a sense of warmth that accompanies the hope that for once, the pandemic may have an end that is in sight. Even though, like the erratic weather we have been seeing lately, nothing about COVID-19 has been predictable, things are looking brighter these days as things are starting to seem normal, or at least, normal-adjacent again. This normalcy comes as a saving grace to many professions and fields impacted by the pandemic, particularly theater. While theater at the University of New Hampshire (UNH) has been far from stagnant this past school year, its newest show “Hecuba” marks the return of live shows on campus as well as a return to theater’s roots: Greek drama.

However, Hecuba was not the Theater Department’s first pick. “The Curious Case of the Dog in the Nighttime,” was the show that had its production halted at the start of the pandemic as students were sent home last year. The production was salvaged through “The Curious Incident of A Curious Incident: A Pandemic Meta-Play,” a production incorporating elements of the original play as well as student-written commentary on the pandemic, yet a full production of the play slated for spring 2021 would inevitably be canceled. “…When you think about it now it’s kind of a little bit sad and naive when you think ‘My gosh, back then we actually thought that we were going to come back and do theater- back in the theater, back with an audience, without masks and being able to have physical contact and all those things,’” says David Kaye, director of both “Hecuba” and “The Curious Incident of A Curious Incident: A Pandemic Meta-Play.”

Yet despite the difficulties of putting on a play during a pandemic, the idea of performing a Greek play seemed like a natural choice. “I started to think ‘What could we possibly do?’ Well, the first thing I thought was ‘All right, we could have an audience probably if we do it outside,’” detailed Kaye. “And of course I realized we were still going to have to have masks and it’s really hard to do things with masks, you can’t see the face, then I said ‘That’s not the first time that theater had been done in masks where you couldn’t see the face’ and that’s what really started me thinking, ‘Well geez we actually have this unique opportunity to maybe do a play that was originally created to be done in full masks outside.’ And so that’s what made me think “You know what? Let’s take advantage of the situation, how many times are we going to have the opportunity or reason to do an outdoor drama in full Greek masks? Let’s do it now.’”

Although performing “Hecuba” as the ancient Greeks would have was a fortunate compromise between practicality and aesthetic, it was not without its challenges as the production team not only navigated through COVID-19 guidelines such as rehearsing for two hours at a time before having to air out the rehearsal space but also adapted to the intricacies of ancient theater. “I am also a dancer, so going into the chorus I thought I was going to have no problem learning the ‘choreography’, but boy was I wrong,” says student actress Sophia Calderwood, who plays Therapaina and one of the chorus members. “Because our movements are matched with text instead of music for the most part, and consists of a lot of statue-like movement instead of constant flow, I am challenged to be incredibly focused for 90 minutes straight.”

Following in the tradition of Greek theater, actors also had to learn how to act while wearing masks– both the face masks we have all grown accustomed to and Greek-inspired theatrical masks designed by costume designer Victoria Cabot. “The most difficult thing for me has been the masks,” describes James Matthews, who plays Polynester in the show. “We perform the show in full-face masks which means I can’t rely on facial expressions. It’s been quite a process trying to redirect my acting into solely my body and not my face, but I think the cast has worked hard to convey an emotional and impactful show despite this challenge.”

While learning to adjust to the finer details of Greek drama, actors had to also learn to connect with their millennia-old characters. Lead actress Julia Somners describes the process of becoming the character Hecuba: “It has taken a lot of discipline in rehearsals to make her a fully- formed character and not just a caricature. It’s hard as a performer to have to sustain the kind of headspace she is in, but at the same time it’s exhilarating and I wouldn’t change it for the world.” Although this proved to be one of the more difficult aspects of the production, finding Hecuba was also one of the most rewarding aspects of the show for Somners. “When I first got the script I had my doubts that I could ever relate to her – an elderly mother, the Queen of Troy – but through the rehearsal process I’ve gotten to learn how she ticks. We’ve stripped away all her layers until we got to the vulnerable, scared, and ultimately extremely noble soul inside. I love Hecuba with everything I have.”

A similar sentiment is shared amongst those involved in the production: preparing for the show may have been difficult, but what started as hard work became a labor of love. “It is one of the most rewarding parts of acting, however, when the art just overtakes your conscious and your body and every muscle is engaged in a way that transports you and you’re no longer thinking about your reality,” Calderwood states. “Which is a good thing when you’re outside in 70-degree weather rolling around in mud…”

Viewers of the show can look forward to dynamic performances by not only its named actors but the members of the Greek chorus. “The chorus is ever-changing, it is sometimes a physical representation of what’s happening inside of any given character’s mind, it is sometimes used as a narrative device to help the audience understand, and sometimes characters themselves,” said Calderwood.

“My absolute favorite part of the show is the chorus of women,” stated Matthews. “Whether I’m on stage or not, the power that they hold when they’re performing is unmatched. It gives me so much energy and they give it right back. They also don’t leave the stage for the whole performance so they have to be in the world of the play at all times. They truly have astounded me throughout this entire process.”

Although Eurepeides’ Hecuba was first performed in 424 BC, students can still relate to the show through its themes of fighting back against oppression, navigating a patriarchal society, living through seemingly endless wartime, along with what director David Kaye describes as the never-ending cycle of violence: “…There is injustice, there is grief, grief turns to rage, rage can turn to vengeance, vengeance can turn to violence, violence turns to grief, and grief turns to rage… and on and on and on.”

With one weekend of the show left, the performers encourage eligible viewers to come and see the live show:

“This play is unlike anything I have ever seen or been a part of. This is the first time a lot of us are performing live for an audience in over a year so it’s really exhilarating for us. Live theatre is definitely something I’ve missed watching as well. I think the emotionally raw tale of Hecuba is an awesome way to kick start your way back into the setting of live theatre,” says Matthews.

“We have put an insane amount of work into this piece and we would be honored for our peers to come see it,” states Somners. “Don’t be put off by the masks and the style of the text, because they all come together to tell a story that will stick with you for a long time.”

“This is a unique opportunity to see this form of ancient theater in a way that I think people will find really exciting, really accessible, really unique, and it’s an opportunity to actually experience Greek theater to a degree in a way that the Greeks themselves would have experienced,” Kaye said. “What better really for a college community, people invested in learning about life, about the world, about history, to have all of these aspects rolled into a theater production and experience it in this particular way? So while you’re here at UNH I really hope our students take advantage of this in some ways once-in-a-lifetime opportunity.”

Students and faculty in the UNH COVID-19 testing program can reserve tickets for Hecuba for free at https://unh.universitytickets.com for Saturday 5/1 and Sunday 5/2 at 2 p.m. The performance will be held behind the Paul Creative Arts Center.

Special thanks to Director David Kaye, Sophia Calderwood, James Matthews, and Julia Somners for their time.