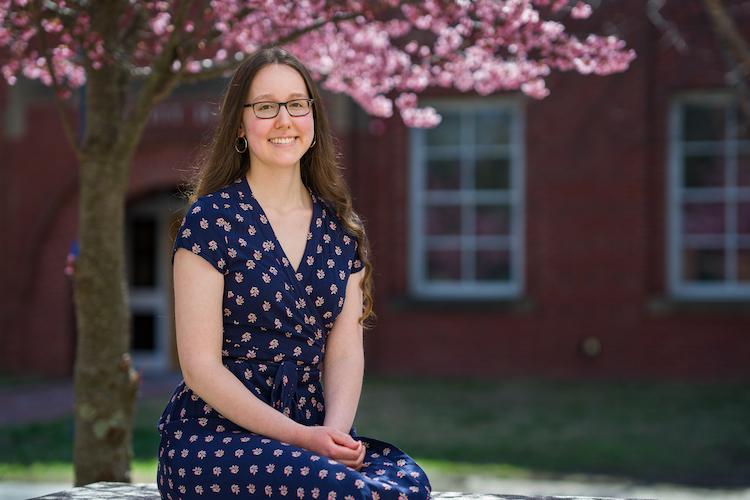 It was a bright and early Monday morning when junior health management and policy major Grace Roy logged onto her Health Care IT Zoom class. They weren’t supposed to meet that day, but Roy’s professor had sent an announcement a week prior asking the class to gather. Roy was expecting a 10-minute project update. What she wasn’t expecting was Provost Wayne Jones to announce she had won the Truman Scholarship. The video of the surprise announcement is now on University of New Hampshire’s (UNH) YouTube channel.

“Looking back at the video I look literally frozen in my Zoom box and I just couldn’t even process what was going on. But it was such a cool moment. Completely took me by surprise,” said Roy, laughing.

Roy is one of 62 students nationwide, out of 825 candidates, to be selected as a Truman Scholar. The $30,000 graduate fellowship, established to honor former President Harry S. Truman, is awarded to undergraduates seeking a career in public service. Roy’s long involvement in substance misuse programs proves her commitment.

She began volunteering in her hometown of Dover, N.H. with the drug prevention program Youth 2 Youth in 2011. It was also around this time that one of Roy’s family members went into treatment for alcohol abuse. Her family member is now in recovery, but Roy recalled the “shame and stigma” that surrounded the family. She credits her mother for giving her and her younger sister a “more positive representation of people with substance use disorder” by treating addiction as an illness rather than a moral failing.

Roy also identified destigmatizing drug use as one of the main objectives of Youth 2 Youth’s outreach programs.

“With stigma comes barriers. And I think that people’s impressions of people who use drugs is really right up front, a barrier to actually listening to people’s stories, listening to what they need help with and then providing that in a way that’s non-judgmental,” said Roy.

Her work with Youth 2 Youth has taken her across the country, from learning about tobacco use in Tennessee to marijuana education in Washington. As a Hamel Scholar, which awards students that have demonstrated academic excellence, leadership, and community service, Roy is also involved with the program’s Substance Misuse Awareness Task Force. She recalled when the task force partnered with HAND UP Health Services, a harm reduction organization that provides users with resources to reduce risk and overdose, to put together kits with clean syringes and info sheets about how to safely inject to prevent vein damage or infection.

The experience inspired Roy to write her policy proposal for the Truman application about legalizing supervised injection facilities where substance users can be supervised by trained medical professionals. Similar facilities currently exist in 10 countries worldwide, according to drugpolicy.org. Roy acknowledges there has been backlash in the U.S. from people who see the facilities as “enabling drug use,” but she believes harm reduction is effective.

“I think what [supervised injection facilities] do is enable people who use drugs to be safe and have health resources, which is really the goal. I mean from a humanitarian perspective all people deserve dignity. All people deserve to be healthy. So, I think like anything that you can do to help people be healthier should be a positive thing,” explained Roy.

Roy has also been inspired by her current public health lab research focusing on increasing access to acceptance and commitment therapy, a form of cognitive behavioral therapy used in the treatment of chronic pain, substance use disorders and many other chronic diseases. It has also been used to help COVID-19 health care workers deal with their stressful workload. Acceptance and commitment therapy encourages patients to acknowledge and accept their negative emotions without wallowing in them.

However, despite all her long track record in public health programs, Roy almost didn’t apply to the Truman Scholarship. She was originally excited when Jeanne Sokolowski of the Office of National Fellowships contacted her about the opportunity, but as Zoom fatigue started to set in, she began to have doubts.

“I actually emailed [Sokołowski] and I was like ‘I have no idea what I’m going to do in the future, like I don’t think I can apply,’” recalled Roy.

It was only with Sokolowski’s encouragement that Roy got through the application process.  “[Sokołowski] has been so helpful and supportive throughout this whole thing; editing all my essays, helping me practice for the interview and everything. I truly could not have done it without her. I wouldn’t have even known about it without her,” she says.

In the meantime, Roy plans to continue her education with hopes to get a job in a state health department focusing on public health and policy initiatives. Although, she hasn’t ruled out work on the federal level in the future.

“I think that’s important to build experience and not so far removed from the populations that you’re trying to help that misunderstanding comes in, or you can’t really see and analyze the results [of your work.],” said Roy.

Photo courtesy of the University of New Hampshire.