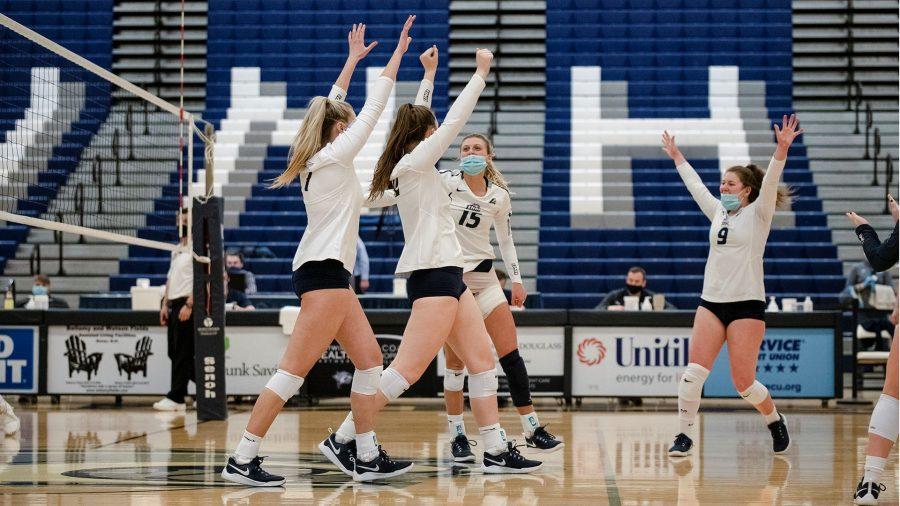 DURHAM, N.H. – The University of New Hampshire (UNH) women’s volleyball team (7-3) dominated on senior day winning easily against the New Jersey Institute of Technology (NJIT) Highlanders (2-10). The Wildcats celebrated senior day cruising to a 3-0 win on the back of the only senior on the team, setter Emma Patlovich. She was honored prior to the game with flowers and applause from teammates before setting a season-high for service aces with four. Patlovich set up teammates for easy kills all afternoon garnering 30 assists and she wasn’t shy to dive on the floor, shown by her five digs.

The second set was much of the same with the Wildcats winning easily. NJIT jumped out to a 7-4 lead when UNH went on a 9-0 run to bring the score to 13-7. First-year libero Ali Stuessi recorded two service aces in the second set. The Cats’ closed out the set with a 10-2 run to win the set 25-12. Sullivan had two kills during the 9-0 run by the Cats’ and was named to America East First-Team all-conference.

“In our shortened season Abby played a critical role to our success.” He added, “She’s someone that commanded a lot of attention from opposing teams, which in turn made everyone around her better.”

The third set was the most competitive of the match with six ties and one lead change in the match. The Highlanders had their biggest lead of the day in the third set 9-6 before the Wildcats stormed back to tie it. The game went back and forth with both teams trading points. UNH pulled away in the later part of the set to get the win 25-17 and close out the match 3-0.

It was a perfect day for the ‘Cats on senior day and the win moved them to 6-3 on the season. The win is the fourth consecutive for the Wildcats moving them to second in America East in wins. UNH has won all four matchups against NJIT including two this season.

The Wildcats were scheduled to take on the University of Albany on Sunday. The game was cancelled and ruled a forfeit due to COVID-19 with UNH handed the win. The win against the Great Danes brought the Wildcats record to 7-3.