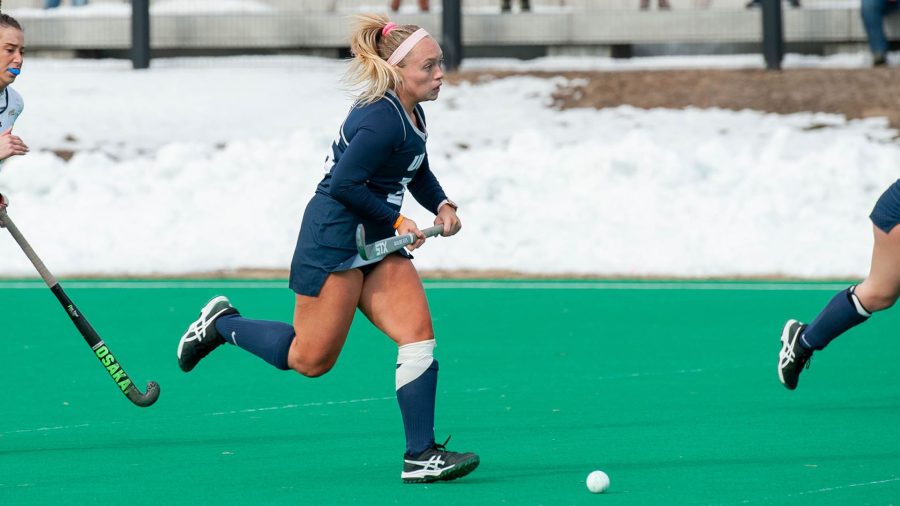 UNH sophomore goalkeeper Jemma Woods had a career-high 11 saves throughout the game. Eight of which were in the third quarter. She briefly exited the game during the second quarter when she was struck with a shot above her leg pads. Redshirt freshman Nikki Tredwell took over letting in only one goal.

Maine developed pressure first in the beginning 91 seconds of the game, with a shot from junior Sydney Meader. This gave Woods’ her first save of the game.

Halfway through the first quarter UNH earned the first penalty corner of the game, the shot was taken by freshman Rosalie Post. A direct shot from the top of the circle was smacked aside by Maine’s junior goalie Mia Borley. The Wildcats continued to apply pressure after the failed attempt and were rewarded with a second penalty corner. Borley saved yet another shot from the top of the circle by Post.

In the second quarter Woods was taken out after receiving the shot above her leg pads, Tredwell entered the game at the 21st minute. In the 26th minute Maine took the 1-0 lead with a goal scored by fifth-year Brittany Smith. After a broken play off of a penalty corner, senior Abby Webber sent a pass down low, and Smith took the shot into the righthand corner. Woods reentered the game with 2:12 remaining in the half.

42 seconds into the third quarter Maine’s junior Chloe Walton scored a goal and the Black Bears took the 2-0 lead. At the 34th minute Woods fought hard to stop consecutive shots from Maine in a span of eight seconds.

UNH senior captain Isabelle Danahy intercepted a pass at midfield and shot the pass forward through the middle to UNH sophomore Jaiden Wittel. Wittel then swung a pass forward to UNH sophomore Ava Mariani who charged the post and flipped a shot inside the near post scoring in the 36th minute closing the gap to one goal.

In the 40th minute Woods stopped another flurry of three shots in the span of 10 seconds, making one more save in the final minute to keep the score at 2-1 through three quarters.

At 1:39 into the fourth quarter Maine senior Hana Davis took a shot from the top right of the circle and it rolled inside the far post making it a 3-1 ball game.

The Wildcats attempted a shot on goal with six minutes remaining but Borley made a sliding tackle to prevent any shot attempt. In the 55th minute Mariani tipped in senior captain Bloem Van Den Brekel’s shot just inside the right post now causing only a one goal lead for Maine.

Less than two minutes after the Wildcats score, Maine struck again. Walton scoring her second goal of the game giving the home team a 4-2 advantage. The Wildcats didn’t go out quietly, Van Den Brekel took one last shot but it ricocheted off the post with just 2:14 remaining in the game.

Neither team recorded a shot or corner for the rest of the way. Maine finished with a 21-9 shot advantage which included 16-5 on goal. In the fourth quarter all three shots on goal resulted in a goal.

Mariani now leads UNH in both goals with six and points with 12 following the two-goal effort at Maine. Van Den Brekel has 15 assists and for 54 points in 62 games, she is UNH’s active leader in both assists and points. She also ranks second in goals.