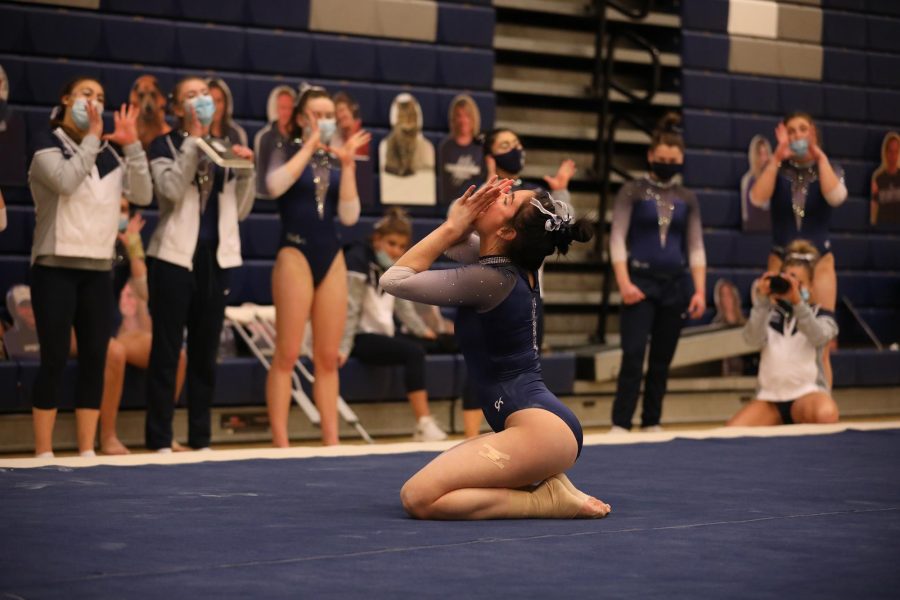 University of New Hampshire gymnastics sits at a current record of 9-3. Head coach Lindsey Ayotte and sophomore Robyn Kelley are proud of what their group has overcome to get to this point and are riding their confidence all the way to the NCAA Regional Championships.

Ayotte has been the head coach for the UNH gymnastics team for two years now but has been with the team for seven years. Ayotte graduated from The University of Michigan; a program which is known for the prowess of their athletics department.

Coach Ayotte has brought that same type of winning mentality to the UNH gymnastics program. In Ayotte’s first year as head coach, UNH gymnastics ranked 41st in the country before their season got cut short because of the Coronavirus (COVID-19) pandemic. This year she looked to improve their national ranking and has done so as they currently rank 35th in the nation. Ayotte has her team in a prime position to make the NCAA Regional Championship on Apr. 1, as only the top 36 teams in the nation make this event.

Ayotte is thrilled that they are on track to finish this year’s full season.

She continued, “I’m really proud of this team for working as hard as they have, especially with the little training that we’ve had this year.”

After last season’s cancelation, the team had a longer period of time off than normal. Ayotte explained that it “motivated this team a lot and think it’s helped bodies heal.” Coach Ayotte mentioned that she wished the team had more time to prepare for this season but “anytime that they get in the gym, they make every turn count.”

It sounds like COVID-19 has definitely given the UNH gymnastics team their challenges, but Ayotte said this team’s motivation and drive is unlike any other team she has coached before.

“I’m very proud of how they’ve handled themselves and how they continue to work, even though obstacles get thrown in their way,” noted Ayotte.

UNH finds themselves competing at the EAGL Championship this weekend with a lot of momentum coming in. The Wildcats have scored 196 points in each of their past two meets.

Ayotte thinks the team’s success is rooting from their confidence and says that it’s building higher and higher each week.

She mentioned sophomore Robyn Kelley who is a solid three-event competitor for UNH as an athlete who’s made a big leap this season.

“She does the all-around and just beautiful lines clean consistently, which is exactly what you’re looking for in college,” said Ayotte.

She also mentioned senior, Clare Hampford who has been “a great leader for this team and just motivating and getting them to where we are.”

Kelley is a Wakefield, Mass. native and attended Reading Gymnastics Academy. Kelly started to get involved with gymnastics at the age of two. She mentioned that she was a very energetic kid, so her parents had her try gymnastics and she has been involved ever since.

The sophomore found early success in her gymnastics career. She always saw herself competing in college, and others also saw this for Kelley. She mentioned in middle school students were already starting to ask her what college she wanted to attend for gymnastics.

Coming to UNH has proved to be a great decision for Kelley. In her sophomore year she is already leading the team on the floor and posting new record scores. This is Kelley’s first full season as last year’s season was cut short due to COVID-19.

With the extended time off Kelley noted, “I have never been off that long besides because of an injury. In a way, it helped me and my team because with everything that has happened, we tried to persevere and tried to work even harder to get where we want to be.”

“It was just so exciting, and my team was right behind me and they were just as excited,” said Kelley.

Despite her personal best from last weekend, there are still things she would like to improve on. Kelley mentioned that she competes in the bars during some weekends, but not all.

“I have improved a lot and the coaches have helped me be better at bars and understand how to swing bars, so for me that is what I look to continue to improve on,” said Kelley.

Both Ayotte and Kelley mentioned their team constantly and not themselves. This seems to be a team-centered group, which is one of the reasons why this team has come together as a whole and why they are looking so strong right now.

The ‘Cats look to improve upon their strong performances in this week’s EAGL Championship and hopes to make it into the NCAA Regional Championship.