Wildcats can’t complete comeback; No.1 BC holds off UNH 3-2 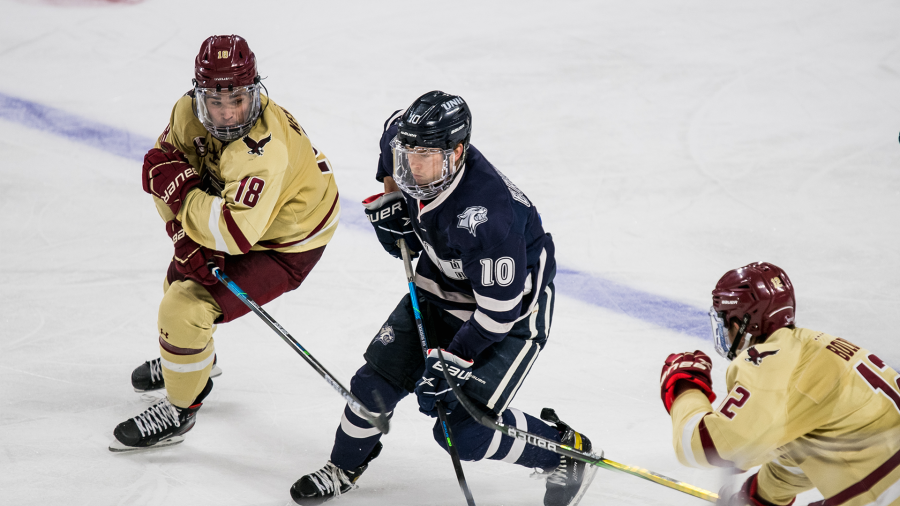 CHESTNUT HILL, MASS. – University of New Hampshire (UNH) men’s hockey (6-14-3) traveled to Chestnut Hill to take on arguably the best team in all of college hockey, No. 1 Boston College (17-4-1) in the Hockey East Quarterfinals. The Wildcats’ season came to an end after losing 3-2 to the Eagles. The No. 9 seeded Wildcats came into this game with some momentum after defeating rival Maine in a blowout last Wednesday night.

The Eagles opened up the scoring early on in the contest when sophomore forward Alex Newhook was sent streaking past the UNH defense on a stretch pass that bounced off the UNH end boards and right into Newhook’s wheelhouse. He ripped one past the right shoulder of UNH senior goaltender Mike Robinson; this gave BC an early 1-0 lead.

Not long after, things started to spiral out of control for the ‘Cats as BC buried two more quick goals. The first coming from sophomore forward Mike Hardman who got to the dirty area of the ice and jammed a rebound opportunity to increase the BC lead to two. Nearly a minute later BC struck again. This time it was off the stick of first-year forward Nikita Nesterenko who one-timed the puck past Robinson making the score 3-0.

The first period scoring ended there and UNH began climbing out of the hole they put themselves in once the second period began.

It was a tale of two periods for the Wildcats as the first was all BC but the second swung back to UNH. With continued forechecking pressure and solid neutral zone defense the ‘Cats were able to force turnovers which created some opportunities to cut the BC lead. That’s exactly what junior forward Eric MacAdams did when he gained the puck in the BC zone and ripped a wrist shot past sophomore goaltender Spencer Knight.

With some life in the second frame the Wildcats kept fighting back and less than two minutes later MacAdams maneuvered around a couple BC defenders to find first-year defenseman Luke Reid wide open in the slot. The Nashville Predators prospect wristed a shot through traffic just under Knight’s glove brining the ‘Cats within one. UNH kept the pressure in BC’s end for most of the second period and outshot them 15-12 during this period.

The third period was a back-and-forth battle with neither side finding the back of the net. BC stood tall defensively as UNH continued to apply heavy pressure on the forecheck sending two forwards in deep with the time expiring in their season. BC pushed back with some more stretch passes from their own end of the ice and tried to add an insurance goal late in the game.

Hardman had another grade A chance in-front of the UNH goal, but Robinson made an outstanding toe save sliding left to right to keep the season alive. With about a minute remaining UNH emptied their net trying to get the game-tying goal but were unable to create any real scoring opportunities and get the needed goal.

Robinson made 33 saves and Knight made 35 as the Wildcats outshot BC 37-36. Neither team scored on the powerplay in this one as the two teams went a combined 0-for-6.

This marks the end of an unprecedented season for UNH and head coach Mike Souza thought his team played well against the league’s top team.

“I thought we had so many good efforts tonight from so many different players. It’s heartbreaking for these guys,” Souza said. “It’s a surreal feeling after you walk in [the locker room] at the end of the year and you see guys crying their eyes out… It’s hard.”

With six seniors on the team there is some uncertainty as to who could be coming back, but for others this is the end of their time here at UNH and Souza reflected on what’s most important to him during these times.