Wildcats off to best start in program history after OT win 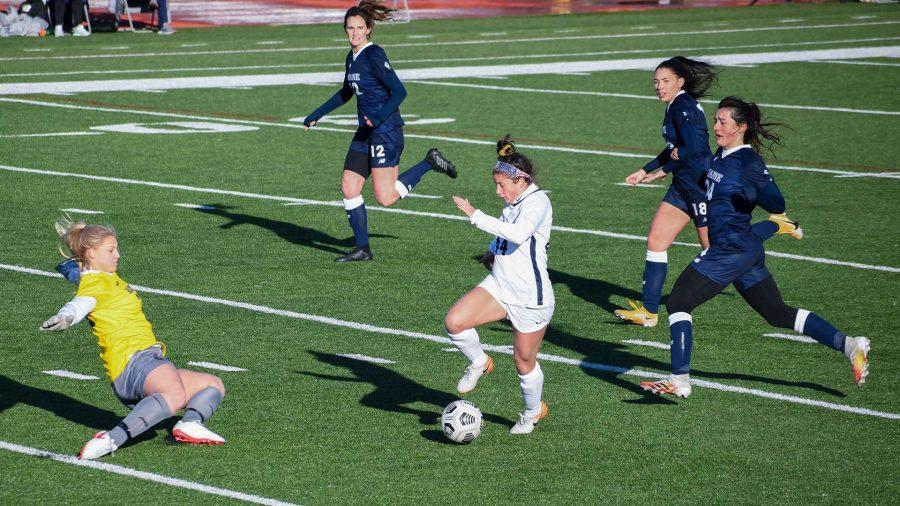 DURHAM, N.H. – University of New Hampshire (UNH) women’s soccer improved to 4-0 (1-0 America East) with a 1-0 win over the University of Maine (0-3, 0-1). The perfect record to this point is the best start the program has seen in their history. The Border Battle was a defensive one for the full 90 minutes, with neither team finding the net in regular time. It took overtime and a strike from the captain, senior forward Francesca Picicci, to send the Black Bears back to Orono empty-handed. UNH outshot Maine 16-4 and looked the better side throughout.

UNH exerted its control on Maine from the opening whistle. The Wildcats’ potent attacking front made several runs toward the Black Bear net but weren’t able to get a shot on target in the opening minutes. UNH pushed Maine’s back line further and further back as the first half progressed. Despite several shots and a forced clearance from Maine’s keeper the ‘Cats couldn’t find the target in the first 15 minutes of play.

UNH finally got a corner for all their attacking work in the 21st minute. The corner, however, didn’t threaten Maine’s defense. The low delivery was easily cleared, and the Wildcats’ attack continued to be frustrated by Maine. Maine’s junior goalkeeper Kira Kutzinski came off her goal line to punch out a UNH free kick, adding another missed chance for the Wildcats.

Maine almost put the ball in their own net in the 32nd minute and Kutzinski was forced into her first save of the afternoon. Things stayed quiet until the 44th minute when UNH won a free kick in Maine’s half. The ball in was a good one, and Maine failed to clear it as it bounced around the 6-yard box. No Wildcat managed to get a clean foot on it, and Maine desperately got the ball across the touchline for a corner. Again, the corner brought little threat to the Maine goal and the first half ended as it started at 0-0.

UNH head coach Steve Welham said Maine’s physical play kept the Wildcats’ offense off-balance in the first half. Welham added that the first in-conference game’s emotion, plus it being against a rival, contributed to the first-half struggles.

“Emotion plays a big role in that game, and we had to settle the emotion and start to play and find feet and connect our passes and once we started doing that, we certainly in the second half started to create more dangerous opportunities,” explained Welham.

In the 50th minute, sophomore Whitney Wiley planted her left leg while making a challenge in the Maine box and went down in pain. It looked as if the Wildcat’s playmaker’s left knee buckled when she planted her foot, and the sophomore was tended to and helped off the field by the team trainers. Wiley leads the team with three goals and is tied for second in assists.

Coach Welham said that the team is still awaiting the results of the tests done on Wiley’s knee. He noted that the injury could be serious.

Welham added that the team needs to adapt after losing Wiley and praised first-year forward Logan Nicholson, who subbed in for Wiley.

“[Nicholson] played vital minutes for us and played very well… she was able to fill in and do very well in that role and we think she’s going to continue to do a great job as well.”

On the other end of the field, the Maine attack was on an island. UNH’s midfield looked intent on giving their defense the day off. The ‘Cats swarmed on any attempt by Maine to play a ball to their attackers.

Maine won their first corner of the match in the 66th minute of play. It looked like UNH dealt with it comfortably, but a missed kick by a UNH defender sent Maine’s junior forward Saylor Clark in on goal. Clark had one woman to beat, but that woman was junior goalkeeper Cat Sheppard who made the save of the game on a close-range shot by Clark.

Coach Welham had nothing but praise for his veteran goalkeeper.

“She was called upon to make a couple of key saves today and she was always there for us.”

In terms of the back line who earned their third shutout in four games, Welham said the young group often plays like veterans, although at times their youth can show.

Maine gained more possession as the second half progressed, and the game felt more even than it had for the first 70 minutes. Neither side looked like a threat to score despite some shots and balls in the box. Both sides threw all that they could muster at one another, but things remained in a deadlock.

Some lovely play from UNH led to a shot on goal in the 87th minute, but Kutzinski was there for her sixth save of the game. UNH did all they could to get the ball forward in the final minutes, but as the clock wound down, the ‘Cats couldn’t find a winner. The teams were fatigued and faced sudden death overtime for the first time this season.

UNH looked the fresher of the two sides to open overtime with several runs into the attacking third. The pressure from the home team finally paid off in the 94th minute of play. A through ball from Bini to Picicci on the left-wing brought Kutzinski out of her box. Picicci beat the Maine keeper to the ball and skipped around her with some excellent footwork. With the Maine goal sitting empty, UNH’s captain fired a shot from 25 yards out that skipped in and kept UNH’s perfect start to the season alive.

The team’s 4-0 start is now the best start to a season in program history. UNH, now 1-0 in conference play, will take their perfect record on the road for the first time this season when they face UMass Lowell Sunday, March 7.