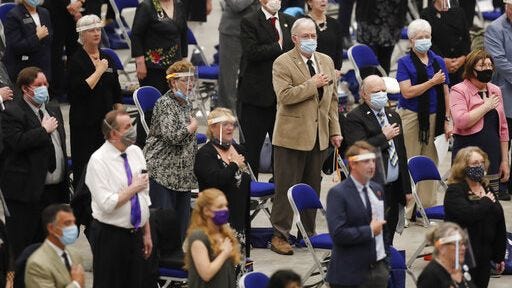 A New Hampshire House of Representatives bill would completely revamp current New Hampshire election laws, and place new limitations on who, how, and when people can vote in the state.

New Hampshire House Bill 86 (HB86-FN) seeks to eliminate same-day voter registration and exact provisions of the National Voter Registration Act. Secondly, it would change New Hampshire’s primaries from semi-closed to closed, meaning voters must be registered with the party whose ballot they want to vote for prior to election day. The last measure is the one that will have the greatest impact on University of New Hampshire (UNH) students: in order to vote in the state of New Hampshire, students must prove they receive in-state tuition. This measure would effectively ban out-of-state students from choosing to vote in New Hampshire.

In the 2020 election, UNH students had the option to vote in New Hampshire or in their home state. Given pandemic-related restrictions, both in-state and out-of-state students were provided several options to vote in Durham this year – via absentee ballot, same-day registration, or pre-election day registration.

According to the Town of Durham’s unofficial results from the 2020 election, there were 1,322 same-day voter registrations, the lowest in many years. However, there were a record-high number of absentee ballots cast –  3,734. While many students would generally register to vote the day of the election, UNH hosted several early voting events this year in light of the pandemic, which could help to explain these unusual numbers.

New Hampshire, often referred to as a purple state, did not consistently vote for one party over the other in the 2020 general election. Democratic Sen. Jeanne Shaheen and Reps. Chris Pappas and Annie Kuster were each easily reelected, but so was incumbent Republican Gov. Chris Sununu. President Biden took the state by an over 6% margin. However, the N.H. House, Senate, and Executive Council flipped from blue to red.

New Hampshire has long been known as a swing state. Independent voters are the largest voting bloc in the state, making up around 42% of the electorate. This law would force these voters to choose a side before primary election day.

“I’m actually a proponent of students voting, but don’t have a way to make other states send absentee ballots to our out-of-state college students,” said Rep. Abramson in an email with The New Hampshire.

“Contrary to what the Democrats/media have claimed, there has been evidence and probable cause of voter fraud in every election,” he continued.

Rep. Silber said he sponsored the bill because of his background and interest in election integrity. He said the goal and purpose of the bill is to have a secure and integrous election system, where every “valid vote” counts.

Silber discussed the federal “motor voter” act, formally known as the National Voter Registration Act (NVRA) of 1993, which aimed to make voting easier and more accessible nationwide. One section of this act states that if a state offers same-day registration at polling places, they are exempt from its requirements. HB86 would eliminate these provisions, causing New Hampshire to fall under the act’s regulations.

Silber said he has lived in a state under the NVRA, and saw no problems with the policy.

“My view is that New Hampshire elections, which deal with New Hampshire matters and issues should be determined by people who are in fact true permanent residents of New Hampshire – whether you’re talking about college students or transient construction workers or whoever – they need to vote absentee, where they are from,” Silber said. He said requesting an absentee ballot is very easy to do, and that is what he did in college.

People have spoken out against eliminating same-day voter registration and other measures proposed by the bill. Kathy Sullivan, the former chairwoman of the N.H. Democratic Party, wrote a letter criticizing HB86 and other bills in the Union Leader. “Republican legislators are proposing several changes to New Hampshire’s election laws. These do nothing positive for the voters, and will jeopardize the First In The Nation presidential primary,” she wrote. “There are other bills with similar proposals and new restrictions on voting. One requires anyone voting by absentee ballot to include a copy of a photo identification with the returned ballot, a burden for disabled, elderly or low-income voters. There are the usual efforts to deprive college students of their constitutional right to vote. Another would increase the amount of money that can be given to political committees, increasing the influence of special interests and the wealthy over elections and legislation,” she continued.

State judges have previously struck down measures seeking to change voting laws in the state. For example, Senate Bill SB3 was dismissed in 2020 by a superior court judge on the grounds that it was unconstitutional and discriminatory.

The Secretary of State’s office did respond to request for comment.