Wildcats upset on home court by UMass Lowell in quarterfinals 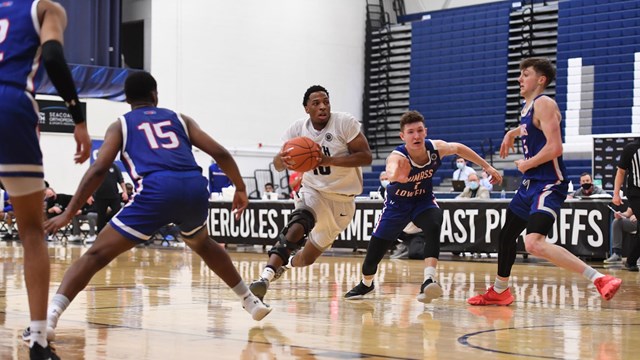 DURHAM, N.H. – No. 3 University of New Hampshire (UNH) men’s basketball (10-9, 9-6) had to face No. 6 UMass Lowell (10-11, 7-8) in their fourth straight game to round out their 2020-21 campaign. The Wildcats hosted the River Hawks in the quarterfinals of the America East Tournament and saw their season come to an end at the hands of the conference’s top player, senior Obadiah Noel.

Noel dropped 28 points on the ‘Cats on 10-of-16 shooting from the field, he also added seven rebounds. This was Noel’s first weekend back after missing the previous five games before the tournament due to injury. His absence may have cost the senior a shot at the conference Player of the Year.

Each side kept the game tight within the first 10 minutes of action. UML began to create separation in the latter portion of the first half after a handful of missed shots from the Wildcats.

The River Hawks manufactured double-digit leads at multiple points throughout the half but UNH never truly went away. A handful of shots from junior Jayden Martinez and redshirt first-year guard Nick Johnson pulled the Wildcats within seven by halftime.

UMass Lowell was just getting started, however. The visitors came out of the locker room and punched the Wildcats in the mouth with a 19-5 run to build up a 21-point lead – their largest of the afternoon. A three-pointer from Noel was the finishing touch on that run from UML.

UNH slowly began to claw their way back into the game with their season on the line. The team saw contributions from a handful of players including Martinez and Johnson. A three-pointer from junior Nick Guadarrama finally got the deficit back to single-digits with under four minutes remaining.

With as little as 44 seconds remaining the Wildcats had pulled within three points of UML, but it was too little too late for the home team. A three-ball and a pair of free throws from the River Hawks put them ahead 72-64 which stood as the final score.

The cold stretch to start the second half was too much to overcome for UNH head coach Bill Herrion and his club. They did, however, see three players eclipse double-digits. Guadarrama led the way with 16, followed by Johnson and Martinez who each put up 14 points.

As the season came to a close for the Wildcats, Herrion reflected on the team’s experience in such an unusual season.

“I’m proud of our guys for persevering through this season,” said Herrion. “We didn’t know if we’d get through a season with the pandemic, so I think our guys deserve a lot of credit for hanging in there.”

As for the future of the program Herrion believes “there’s a lot of positives.” Given the jump that Martinez and Guadarrama made from a season ago, and the emergence of Johnson and redshirt first-year guard Blondeau Tchoukuiengo, Herrion is certainly justified in his thinking.

Looking ahead to the offseason, there will be plenty of opportunity for the team to grow that they didn’t have during this past summer.

“Not having a spring and not having a summer I think held some people back physically,” said Herrion. “This spring is going to be huge for our players in the weight room and on the court with their development.”