Wildcats’ season ends at the hands of Northeastern 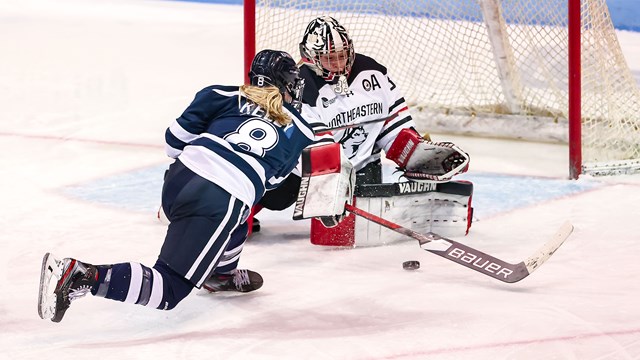 The University of New Hampshire (UNH) women’s hockey team (7-14-1) was eliminated on Sunday by Northeastern (18-1-1) in the quarterfinals of the Hockey East Tournament. The Wildcats defeated Holy Cross (4-15-1) in the first round of the tournament before their matchup against the Huskies.

Northeastern junior forward Katy Knoll put a goal through junior goalie Ava Boutilier’s legs to give the Huskies a 1-0 lead at the 5:55 mark.

The struggles for the Wildcats on the special teams continued as they failed to convert two power play opportunities in the first period.

“Obviously we’ve got to be better and convert more. If we even converted a third of the opportunities we have on the power play, we’d be scoring a lot more goals,” said Witt.

The first period ended with the Huskies up 1-0 on the Wildcats.

The Huskies scored twice early in the second period giving them a three-goal lead. The first came from Huskies forward Katie Cipra. The second came at 7:57 off the stick of senior forward Veronika Pettey.

Northeastern senior Skylar Fontaine scored a power play goal for the Huskies at the 12:55 mark followed by a goal from sophomore Kate Holmes 22 seconds later to put the Huskies in charge 5-0. They extended their lead to six on an unassisted goal from junior forward Mia Brown with less than 30 seconds remaining in the period. The Huskies doubled up the ‘Cats in shots in the second period with 18.

Huskies junior forward Alina Mueller scored the only goal of the third period for either team about midway through the frame. The Huskies never looked back holding UNH to only seven shots in the third period.

The game ended by a final score of 7-0, ending the Wildcats 2021 campaign. The ‘Cats finished the season with a record of 7-14-1. Witt said this was a building block season for the team in terms of their development. She expects the young core to continue to grow.