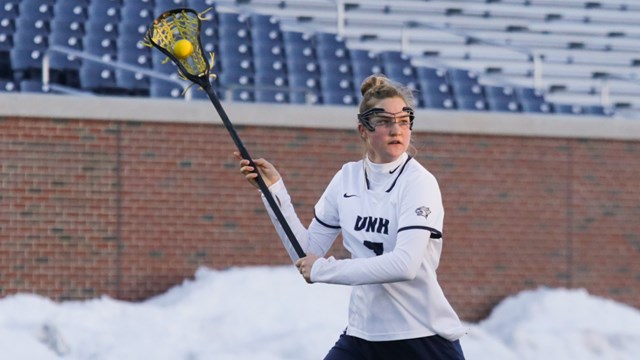 Friday afternoon University of New Hampshire (UNH) hosted Merrimack College (0-1) in each team’s opening matchup of the season. The Wildcats (1-1) came away with a dominant victory as they put up a final score of 20-9. Much like last year’s season opener when UNH beat Merrimack 15-9.

Senior attacker Sabrina Grovom got things started for the Wildcats as she scored the team’s first goal of the season at the 27:11 mark. It was not long after that first-year midfielder Olivia O’Connor added another to the score to give the ‘Cats a 2-0 lead.

Two more Wildcat goals were scored within just 38 seconds of each other by junior midfielder Abby Cranney and sophomore attacker Liv Dunn making the score 4-0 at 21:01. Dunn had not recorded a single point in her abbreviated rookie season last year; however, on Friday, she led the team in goals and points scoring five times with one assist.

Before the Warriors could put up one goal the ‘Cats threw three more on the board making the score 7-0. These goals were scored by sophomore midfielder Ava Schroeder at 19:43, grad student Rylee Leonard at 17:29, and Dunn’s second of the day at 15:19.

In the midst of that, senior midfielder Julia Neyland and junior midfielder Delaney Pratt both put one in the net making the score 9-4 with UNH ahead going into halftime.

The Warriors started their second half scoring at the 17:18 mark as Mahanna scored a goal giving their team their fifth goal on the afternoon.

UNH responded by scoring three consecutive goals. Two coming within 38 seconds of each other. Sophomore attacker Izzy Holmes found the back of the net at 12:53 and Schroeder got one through at 12:15. Neyland went on to score her second goal of the game at 9:22.

Merrimack finally shows some life as they went on a 3-1 push getting the deficit back to seven points with 6:51 remaining in the game. Two of the three goals gave Dzialo her first hat trick of the season.

The third one came just after the Wildcats scored three more goals making the score 18-8 with less than five minutes remaining. One was scored by Cranney and the other two gave Dunn back-to-back goals.

Dzialo ended her day with her fourth and final goal for the Warriors with 3:05 remaining.

UNH was not done yet though as Grovom scored with 1:44 on the clock and with just 21 seconds remaining Dunn scored her fifth of the day making the final score 20-9.

However, on Sunday the Wildcats did not look like the same explosive team that was seen on Friday. That title was handed over to the UConn Huskies (2-1). UNH was brought back down to earth as the Huskies put up a score of 19-4.

Senior midfielder Sydney Watson got things kicked off for UConn less than 30 seconds into the game as she scored an unassisted goal.

The Huskies did not stop there as they ran up the score 11 more times before the ‘Cats could score once.

Olivia Troy’s first goal of the game came at the 27:39 mark and was assisted by senior attacker Stephanie Palmucci. This was followed by a second unassisted goal from Watson at 24:54 to make the score 3-0.

Watson netted her fourth of the day at 19:06 then assisted Shaffer less than two minutes later. LaPrise was assisted by Troy at 16:37 who went on to score an unassisted goal herself. McKenna then found the back of the net once more to make the score 12-0.

With just 2:36 left in the first half UNH finally got the ball in UConn’s net thanks to Holmes. This put the score at 12-1 by halftime.

Barry, Watson, and LaPrise came out firing for the Huskies to start the second half. Troy got things started by assisting Barry in the first minute of play. Unassisted goals by Watson and LaPrise helped UConn stretch their large lead to 15-1.

UNH showed some life with 12:54 and 10:46 remaining as Grovom scored back-to-back goals. She got help from Leonard and sophomore attacker Katie Taranto cutting the deficit to 12.

That wrapped it up for the Wildcats as the next four goals were all Huskies. Starting with sophomore midfielder Rylee Brown and first-year midfielder Megan Whitley. Barry was able to grab her third goal of the day before time expired. First-year midfielder Morgan Carter finished things off for UConn to make the final score 19-3.

The Wildcats will try to bounce back after a tough loss next week when they visit UAlbany Saturday, March 6th at 3 p.m.