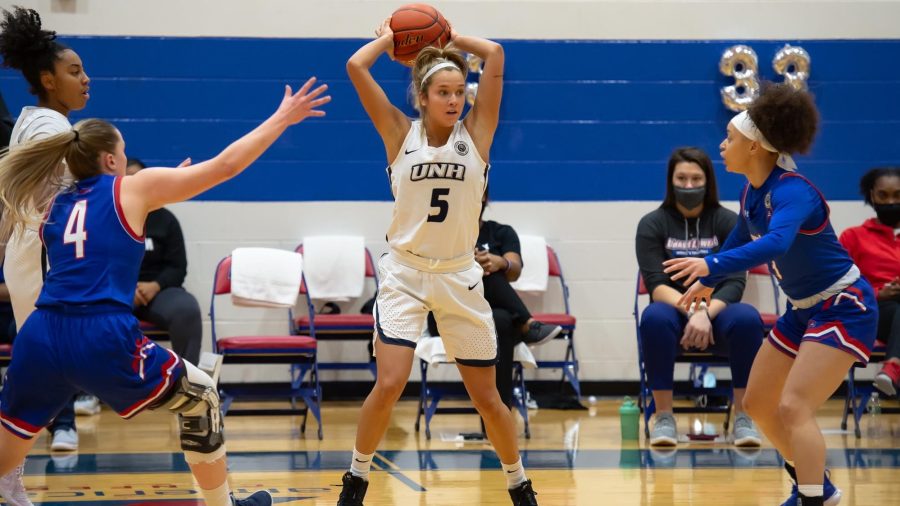 ALBANY, N.Y. – University of New Hampshire (UNH) women’s basketball fell to the University of Albany (UAlbany) in the first round of the America East Tournament by a final score of 49-43 on Sunday. UNH (5-15, 5-11) entered the contest as the fifth seed, with UAlbany (6-10, 5-7) earning the fourth seed. Head coach Kelsey Hogan’s young team almost pulled off a double-digit comeback, but back-to-back three-pointers with under two minutes to play proved to be the dagger for the Wildcats.

First-year guard Adara Groman led the ‘Cats with 13 points on 5-of-12 shooting with five rebounds and two steals. Senior guard Amanda Torres was the only other Wildcat with double-digit points finishing with 10. Torres also added three rebounds and four steals.

“The performance that she had, she doesn’t play like a freshman, and that’s where I’m really excited about her bright future,” explained Hogan. “She comes in so confident. You know defensively she’s locked into the game plan, doing everything we could ask her.”

UNH jumped out to a 6-0 lead to open the first quarter with help from behind the arc from sophomore guard Helena Delaruelle along with Groman. Groman was recently named to the America East All-Rookie team.

UAlbany was able to punch back with six straight of their own to tie the game. UNH fell behind as the Great Danes extended their run to 14-0. Senior guard Kyara Frames was the standout for UAlbany with eight points, six of which came from behind the arc.

UAlbany had the opportunity to stretch the lead with free throws at the end of the first, but only managed one point from two trips to the line. The Wildcats’ offense was unable to make up any ground, however, and the quarter ended with UNH down 15-6. Hogan’s team went nearly nine minutes without scoring a point.

“Realistically, we just weren’t focusing in on finishing,” said Hogan.

Junior Ivy Gogolin finally ended the drought after more than nine minutes with a layup that made the game 17-8. UAlbany pushed the Wildcats with a full-court press. UNH beat the press several times but failed to capitalize the majority of the time. The baskets from Groman and first-year center Paige Cote brought UNH within seven before Albany stretched their lead back to nine at the halfway mark of the second frame

UNH continued to struggle offensively and had their second and third shot clock violations of the half in the final five minutes. The Danes took a 25-12 lead into the locker room at halftime in what was one of the worst offensive halves UNH has had this season. The ‘Cats shot 5-of-24 from the field and had 11 turnovers. UNH lost the offensive rebound battle 8-1 and allowed nine second-chance points.

Torres finally got her first points of the game three minutes into the third quarter as UNH began to turn things around. Groman’s second three of the night brought the ‘Cats within single digits, and a layup from Gogolin made the score 27-20. UNH continued to put up a tremendous fight in the third but faltered at the rim and the free-throw line. The usually elite free throw shooting Wildcats were 5-of-9 in the first three quarters. Torres got her fourth steal of the night and set up Groman for her fifth basket pulling UNH within four to end the third with a score of 33-29.

A lead that had been as much as 14 points for UAlbany was down to three with a free throw from Gogolin to make it 34-31 with 6:40 left to play. The Danes pushed their lead back to five before Torres euro stepped through the paint and made a layup to make it 36-33. Delaruelle sank two free throws to bring the ‘Cats within one with 3:19 to play.

UNH continued to fight, but back-to-back threes squashed Wildcat hopes and pushed the score to 44-39 with 52 seconds to play. Torres hit one of two free throws and made it a four-point game with 48 seconds to play. UNH fouled and sent Frames to the line, who went 1-for-2 and extended UAlbany’s lead to five.

UNH couldn’t get a basket to fall and had to continue to foul. More Great Dane free throws extended their lead to nine. Sophomore guard Brooke Kane hit a three to make it 49-43 with five seconds to play.

Hogan praised her team’s fight and said she was proud to be their coach.

“They really buy into it especially what we’re looking to do down the stretch. So, I’m really proud of them for that. I’m proud of their efforts,” said Hogan.

The fight was admirable, but Hogan mentioned that the energy required to come back from a 14-point deficit might have impacted the team’s fourth quarter.

“I mean you look at our first five playing over 30 minutes each, and then you got Amanda Torres playing 40 for us. I think that definitely could have been the issue down the stretch for us. We were trying to go all-out into it, but our depth has kind of been a struggle for us this year.”

The loss marks the end of a season like no other for UNH. A team with only one senior and a rookie head coach who played in a pandemic certainly weren’t at the top of many preseason rankings. But with a year of experience now under her belt, Hogan will look to the future with a strong young core of players around her. Hogan will also be joined by Torres once again next season. Torres has confirmed to TNH that she intends to return for a fifth season in Durham and will take one more shot at the America East in 2021-22.