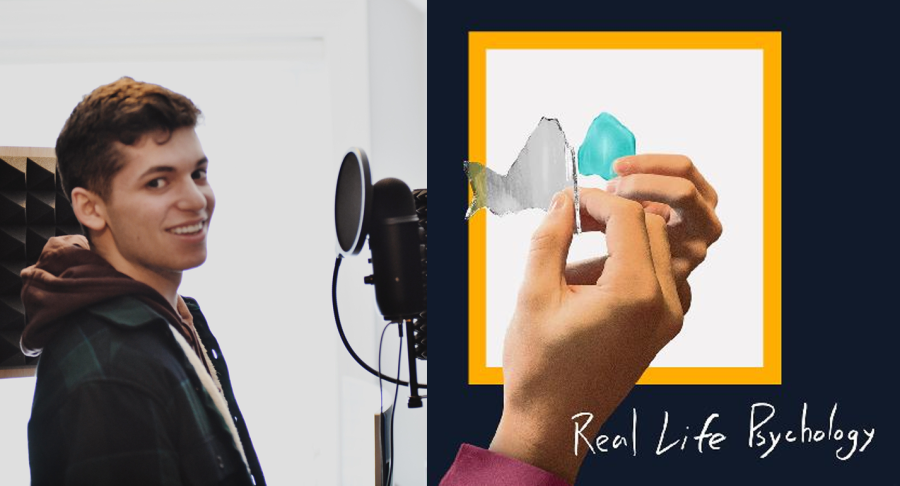 Wolfe Ramsay is many things.

A high school senior. A basketball player. A musician.

He now adds album writer to the list with the release of his first full length album “Real Life Psychology” earlier this month. 100% of the album’s proceeds earned from streaming services will be donated to the Jimmy Fund.

The Jimmy Fund, established in Boston in 1948, consists of community-based, grassroots fundraising events and other programs that benefit the Dana-Farber Cancer Institute’s “lifesaving mission to provide compassionate patient care and groundbreaking cancer research for children and adults,” according to the fund’s website.

Cancer research has held a personal importance for Ramsay since his friend Miles Goldberg was diagnosed.

“We were good friends since we were very young,” said Ramsay. “We went to preschool together, and in sixth grade he was diagnosed with cancer.

Miles was 13 when he passed away from osteosarcoma (bone cancer) in May 2017.

Ramsay’s family has since completed multiple fundraisers for the Jimmy Fund, from running lemonade stands to participating in the Boston Marathon Jimmy Fund Walk. In 2019, Ramsay helped his younger brother Will Ramsay raise over $20,000 for the fund as part of his brother’s bar mitzvah project.

“The Jimmy Fund is something I’ve been passionate about for a while, so it just felt natural to me. The album was a great way, in my opinion, to promote a fundraiser,” explained Ramsay.

Ramsay has been a music fan since he was young. He grew up surrounded by music with his cousins playing guitar, piano and the drums. Ramsay has also taught himself the guitar and has been playing for five years. However, he got his first taste of the song-writing process during late middle school and early high school when he and his friends would write parodies and songs for fun.

Then, when Ramsay was 15, he released three tracks (“You Were Right,” “Threads,” and “Need You More”) for the “Art 18-19″ EP. In summer 2020, he dropped his first official song collection in the “Think About Me” EP. Ramsay’s initial style focused on the rap and R&B genre with influences from Coldplay, Kanye West and THEY. But the release of his first official album, “Real Life Psychology,” this year marks a shift to a more “alternative-pop fusion” style, according to his website.

“The concept of [“Real Life Psychology”] is explaining the psychology of having changing personal relationships in your life,” said Ramsay. “It’s about the mental side of becoming less close with people who once meant a lot to you. The goal was to tell a specific story that explains these concepts.”

While most of the songs on the album are “more vague and metaphorical,” Ramsay gets more personal in his favorite track “turn back time.”

“It summarizes my current relationship with the person the overall story of the album is based upon,” he explained. “The song is very reflective, honest, and almost nostalgic in a way that many other songs aren’t.”

Ramsay says the COVID-19 pandemic has not disrupted his artistic process because he has a mini recording studio in his room. It has actually given him more time to dedicate to his work. Even with school and basketball back in session, Ramsay finds time for his music.

Ramsay also credits his friend and fellow basketball player, Doug MacGown, for acting as an “approval system” during the lyric writing process.

“It’s good to have another pair of ears to approve of something because not all my ideas are good, and some of them need to be left behind,” said Ramsay, laughing.

Along with MacGown, Ramsay is thankful for the support he has received from his parents. Ramsay’s album covers and website were all created with his father’s help. Meanwhile, Ramsay’s mother has helped him advertise in the community.

In the meantime, Ramsay continues to wait to hear back from colleges, but is feeling “pretty optimistic about it.” He intends to major in marketing while continuing his music career.

“I don’t need to become famous or anything, but I hope to keep making music that at least some people will listen to and be inspired by themselves,” Ramsay said. “I really like the artistic, lyrical side of it, so I just hope I can get some people to pay attention.”

“Real Life Psychology” is available for streaming across platforms. A donation page for the Jimmy Fund can be found on Ramsay’s website.