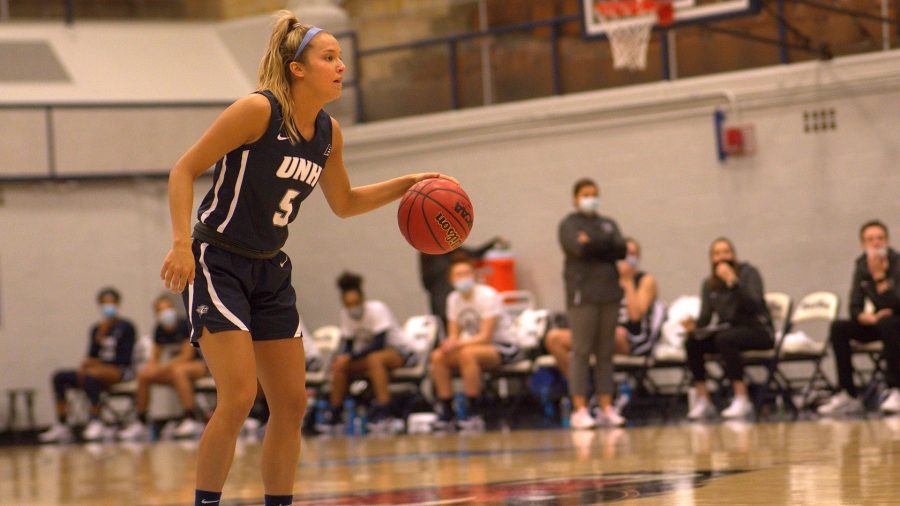 UNH got the scoring started in typical fashion with a free throw from senior captain Amanda Torres. Torres missed her second free throw, which doesn’t often happen for the 80% free throw shooter. Maine responded with four points to take the lead before emerging first-year athlete Adara Groman knocked down a three to tie the game at four.

Maine got four easy points in the paint to take a four-point lead. UNH wasn’t able to take back any points of their own when first-year center Paige Cote missed a layup that should have brought the ‘Cats within two. Maine sophomore guard Anne Simon got her ninth points with an and-one layup. Most of the Wildcats’ defense seemed to be focused on fifth-year guard Blanca Milan. The plan was working with Milan scoreless, but Simon picked up the slack with ease.

Things spiraled quickly for UNH in the latter half of the first quarter. Maine hit two threes, and Milan came to life for five points. Before the ‘Cats could catch their breath, they were looking up at a 24-9 deficit.

UNH looked reorganized to open the second quarter. Milan took home a quick layup, but after that, it was all UNH. Cote got some points from the free throw line, and Groman hit her second three of the day to bring UNH within 10.

The momentum eventually swung back to the Black Bears as the baskets dried up for UNH. Maine’s offense came to life, and a three from Simon saw Maine take a 36-16 lead with four minutes left in the half. The 17-0 run was a critical blow to any hopes of a comeback.

Head coach Kelsey Hogan gave an honest assessment of the six and a half minutes UNH failed to score.

“I think we got tired. Our youth showed… That’s a big thing that we’ll be working on in the offseason,” she explained.

Hogan added that many of the young UNH players haven’t experienced heavy minutes previously in their careers and that they’ll need to learn how to stay locked in when they’re tired.

Torres finally ended the UNH scoring drought with a three, but Maine responded with a three of their own and extended their lead to a daunting 48-21 at the half. The Wildcats played hard but shot a lowly 21.4% from the field. Maine employed a press in the ‘Cats backcourt similar to the one UMass Lowell (11-8, 10-6) had so much success with versus UNH last weekend. The Black Bears saw similar results in the first half with a turnover differential of 13-3.

After some baskets from both sides early in the third, Maine’s lead was 56-26. UNH got in the bonus from a succession of three Maine fouls.

Some scrappy defense and an excellent full court run from Groman gave the first-year her seventh and eighth points of the day. Junior Ivy Gogolin was a bright spot for UNH in the third with 10 points in the quarter. Torres got herself into double digits in points with a three. The senior has now had 10 or more points in 13 games this season.

Hogan was once again complimentary to her lone senior on the growth she’s shown this season.

“She’s put in a lot of work especially in the offseason, just her confidence from that range [has improved] and I was really proud of her especially for that today.”

Sophomore guard Helena Delaruelle struggled offensively with only two points on 1-of-11 shooting but grabbed a team-high nine rebounds. The individual statistics were little consolation with the third quarter ending 70-39.

Torres hit her third three of the game early in the fourth, her most in a single game this season. She finished a perfect 3-for-3 from behind the arc with 16 points total. A Maine layup with a little over two minutes to play gave them an 80-49 lead. This game was the first in which UNH has allowed 80 points since the first game of the season against Boston College (6-10, 2-10), the ‘Cats lost that game 80-44. UNH avoided a 30-point loss with some late free throws but were left to swallow an 82-53 loss.

UNH will face the University of Albany (6-9, 5-6) in the first round of the postseason on Sunday. The Wildcats are 0-2 versus the Great Danes this season. Coach Hogan said postgame that the team relies on Torres but will need to step up as a unit to find postseason success.

“Ivy Gogolin is doing a lot for us… But we need to definitely get some more to out of Brooke Kane, Elena [Fiore] as well, we’re definitely at our best when it’s more a balanced effort for sure,” Hogan explained.