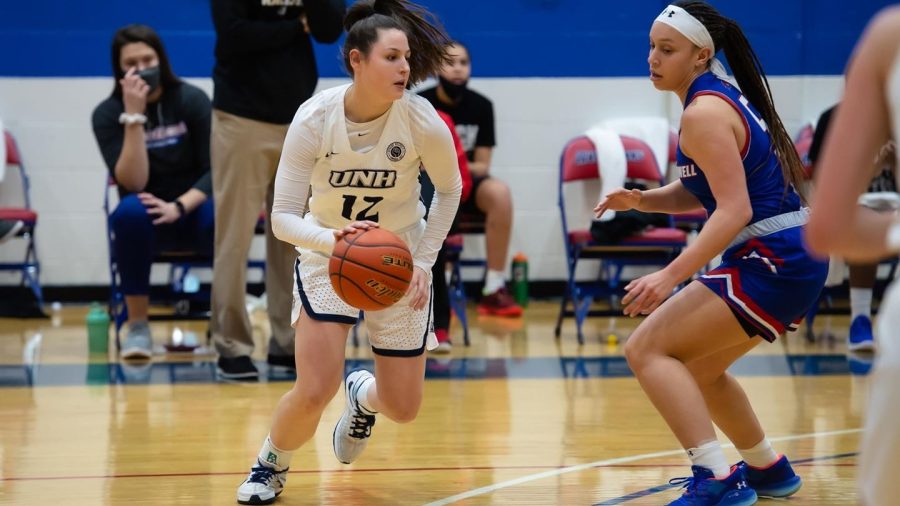 LOWELL, MASS. – University of New Hampshire (UNH) women’s basketball (5-13,5-10) dropped both games of a two-game series against UMass Lowell (11-8, 10-6) over the weekend. The Wildcats, who have exceeded most expectations this season looked more like what their preseason projections looked like in this weekend series. Neither game was close, and head coach Kelsey Hogan showed some frustration with her teams’ performance.

In game one, UNH fought hard for the first six points of the game, holding Lowell without a basket for the first four minutes of action. The momentum swung in the latter portion of the first, however. Lowell came to life and exploded on an 11-0 run. UNH played with an impressively disciplined 2-3 zone throughout the first, forcing the Riverhawks to fight for their baskets. Unfortunately, some mental mistakes on inbound plays coughed up points and extended the UML run to 15-2. Senior guard Amanda Torres stepped up and kept the ‘Cats close with a three and a driving layup; the first quarter ended 20-13.

Lowell’s momentum carried into the second with five quick points in the quarter. More UNH turnovers in their own backcourt turned into points for the Riverhawks. A game that had felt close and competitive was suddenly a 31-18 ballgame. Coach Hogan was audibly frustrated with her team’s performance and tried to turn things around in the huddle during a timeout.

The Riverhawks’ full court press seemed to fluster the young Wildcats and turnovers continued to plague the team. A shot finally fell for the ‘Cats as first-year athlete Adara Groman hit a three to end the half. The basket was little consolation for UNH, who had seen an early lead fall to pieces thanks to a 40-15 run from UML. 15 turnovers and 28% shooting left no secret in terms of the mountain Hogan and her team had to climb in the second half.

Things didn’t improve much in the third quarter for UNH. UMass Lowell extended their lead to 50-23 with a little under five minutes to play in the quarter. The game slowed down for the rest of the third, and Lowell sat comfortably atop the Wildcats 57-29.

UNH seemed to accept their fate in the fourth and would have to swallow a 74-40 loss to open the series. UMass Lowell shot 54.7% compared to the Wildcats 29.8%. Groman was the only UNH player in the double digits with 10 points on 3-for-9 shooting, two of which were from three-point range.

Junior Ivy Gogolin took control for the ‘Cats in the first part of game two. Gogolin scored the first six points for UNH. Lowell was slow out the gate once again with only four points of their own in the first five minutes of play. The Riverhawks continued their press that was so effective in game one, but UNH countered early on. The Wildcats enjoyed success the rest of the first and ended the quarter ahead 18-14.

Lowell pushed back early in the second quarter. UNH only had one basket in the first four minutes and the Riverhawks took advantage tying the game at 20. Fouls were an issue in the second quarter for UNH. Hogan’s team committed five fouls in the first five minutes putting Lowell in the bonus; they capitalized and took a 28-22 lead on a 16-4 run in the quarter. UNH managed two more baskets that quarter, but more fouls and Riverhawk free throws left the Wildcats down 33-26 at the half. Gogolin and Torres were back to their productive selves as Gogolin had 10 points, and Torres wasn’t far behind with seven.

UNH kept up in the first half of the third quarter but couldn’t reel Lowell back in. The Riverhawks looked to pull away in the late stages of the third, but junior Mariah Gonzalez hit her first two threes of the season to keep UNH within seven. After a Lowell timeout, the Riverhawks came out organized and motivated. A quick run in the final moments of the third sank the Wildcats’ deficit to 15.

UML picked up right where they left off in the fourth, pushing the lead to 20 before Torres hit a three to pull within 17. Torres then found sophomore Helena Delaruelle for a fast-break layup. Delaruelle added a free throw on the next possession and cut the lead to 60-46. That small run was the last gasp that Hogan’s team could muster.

The Riverhawks pulled further ahead and smothered the Wildcats’ offense. The press against Torres was particularly effective as she is the conduit for UNH’s offense. Lowell looked to cut off any connection between the senior captain and her teammates. In the end, UML was able to cruise to a 73-52 win.

Torres and Gogolin were the only Wildcats in double digits, putting up 12 and 11 respectively. Torres also added five rebounds and two assists while Delaruelle finished with a team-best five assists. 22 turnovers and 20 fouls did their part in sinking UNH’s hopes for a series split.

The Wildcats will travel to Maine (15-2, 12-2) this Saturday as the Black Bears sit atop the America East standings while the Wildcats sit in sixth.