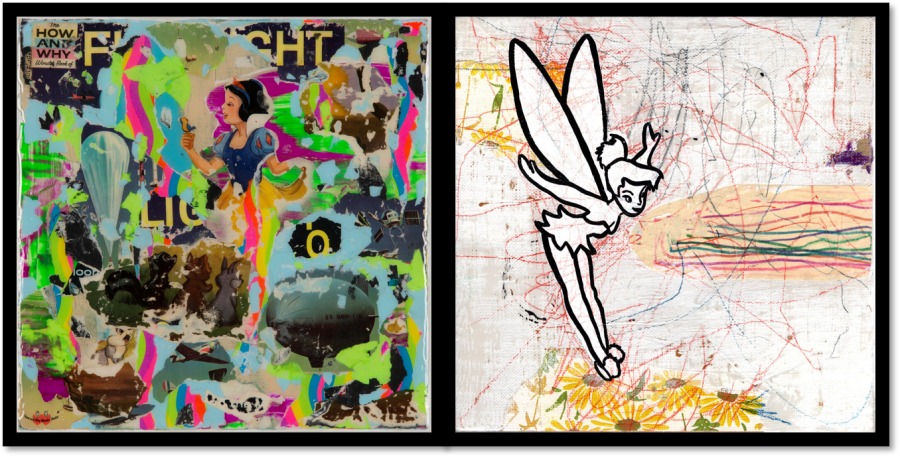 I had the opportunity to talk with Craig Hill about his current exhibit, Clusters, on display at 3S Artspace in Portsmouth. The eclectic mélange of comic, collage and culture is a trip.

“History, memory, and decay,” are some of the goals of Hill’s exhibition. “To create fictitious place, where dreams and psychedelia and youth culture” can come together. The exhibit will be featured through the end of the month.

Hill combines a lot in his work – comic books and counterculture, decay and growth. Dichotomy and synthesis run through every piece in the collection. Powerfully, he makes use of the images of the twentieth century, pop culture and comics, that, in his collages, become more like mirages of an imagined collective past.

In some pieces, namely Super Freaky Memories and Saturday Morning Flashbacks, memory is given chase. Like tattering posters on a wall, reduced in decay to their most basic communicable aspects – font, color, face, letter – the images from comic books and children’s movies, television, look as memories feel. A now-obscure TV show that one watched only in a very particular place and time: Glenn Martin DDS, Beverly Hills Teens. Hill’s exhibit shares an aesthetic with every vaguely remembered blurt out of a television, given significance and glory because it, somehow, stood out against the mélange of every other moment from youth.

Significance, though, that is not necessarily founded. Those late night TV memories feel pregnant with meaning, but going back to watch the show might reveal nothing but a mediocre program that happened to strike the right place in the memory bank. Clusters leaves images as images, without attempting to assign them meaning, political, religious, etc., and hanging them out to speak for themselves, devoid of anything but their ability to stimulate word association. Elsewhere in Clusters, Hill experiments with the comic book form, attempting to make it into poetry. These nostalgic, ethereal storyboards fit together in tenebrous narrative. A poetic influence of Hill’s, Frank O’hara, has words that feel illustrative of Hill’s comic poetry – blending youth with ambiguity. “Have you forgotten what we were like then/ when we were still first rate/ and the day came fat with an apple in its mouth.”

The free associative, arbitrary collection is attractive and deeply nostalgic, pushing the viewer back in time into the choppy, elegant world of silent movies and cartoons. Hill calls you back to a childish, though not innocent, way of thinking, remembering, and dreaming.

Until the 28th of February, Hill will be on exhibit in Portsmouth and online at https://www.galleryat3s.org/cluster. It’s a favor to your younger self to give it a look over, and it is, simply, fun to look at. It’s not everywhere you can see Mickey Mouse, Steve Cannon, the Apollo 8 crew, and many others, working toward the same end. You can, this month on Vaughan Street, immediately next door to Barrio.