Putting the past ‘POTUS’ in perspective 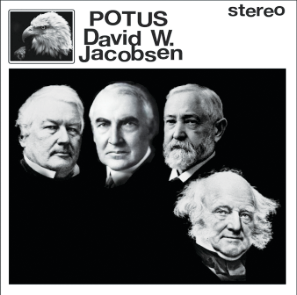 President’s Day isn’t exactly a holiday that people outside of elementary school or marketing departments tend to celebrate. While the day off for some workers is appreciated, it’s a day that gets a shrug from most Americans. You won’t ever be forced to endure weeks of President’s Day songs in your local grocery store or surprised by them on radio stations that were certainly not geared to the holiday. Still, perhaps it could be used as a day to reflect on our country’s past leaders – including the bad and the forgettable.

So enters David W. Jacobsen’s “Potus” a genre-mixing album that looks at former presidents who tend to be forgotten by the mainstream that was released last October. Highlighting both the best and the worst of eleven presidents, ranging from Chester A. Arthur to John Adams, Jacobsen tells a part of each president’s story from their perspective. His lyrics are based on his own readings of various presidential biographies, though the actual events in his songs have been fictionalized.

Each song on “Potus” stands alone and at times, it seems like the songs could’ve come from very different albums. I do think some of the musical transitions between these songs can be jarring. This album has songs that can encompass various genres, from folksy indie to rock , and it’s not always a gentle change. The difference between the upbeat indie “Old Man Eloquent” to the jazzy “Leave My Bones in the Ground” definitely put me out of my vibe for a bit. On the whole though, I enjoyed the album’s inconsistency. After all, not only is it all tied together because of the theme, but my favorite songs on the album broke from the mold of the first two songs (which are very indie) and

“Potus” begins with “1799,” a song based on John Adams and the split of the Federalist party that led to Adams defeat in the election of 1800 – a topic those who’ve blasted “Hamilton” might be familiar with. It’s the kind of song that I could imagine playing at a coffee-shop, with its peaceful guitar and soft drums. I’ll admit that most of what I know about John Adams, I learnt from the musical “1776” which notably and understandably did not cover his presidency, for obvious reasons. Getting to listen to these songs made me more interested in learning about presidents who aren’t as prominent in the typical high schooler’s history education (which, for me was a relentless cycle between the colonial period, the Revolutionary War and then the Civil War, with little in between.)

“Swing Around the Circle” sounds like it came straight from a villain song in a musical. It features a dramatic organ that compliments the nasally tone that Jacobsen takes in his Andrew Johnson perspective. With lyrics like “Don’t talk of injustice/I came from nothing/to be where I am now” Jacobsen paints a picture of an unrepentant man, who cares little of other people’s struggles (especially those of African Americans in the time after the Civil War) because of how he rose out of poverty to become president. It’s a bop that I think is relatable in that, don’t we all know someone who thinks because they accomplished something others have no barriers to following their paths?

The only song on the album that is comparable in musical vibes is the one that follows right after it, “Samuel Tilden’s Lament,” a power rock song featuring the titular Samuel Tilden bemoaning his position being stolen from under him by Rutherford Hayes. It sounds like what one would sing when they’re pacing the floor of their castle in the dark of the night, betrayal, hurt and anger in their eyes as they plot to take down the person who wronged them.

“Nothing Left to Do” is one of my favorite songs on the album. The upbeat melody contrasts sharply against the rather downer lyrics as Jacobsen sings out that “there’s nothing left to do but get drunk” echoing Franklin Pierce’s words when he failed to get renominated to run for president. It’s definitely indie rock, but the kind that makes you want to dad-dance in your chair.

“Potus” might not be everyone’s cup of tea and it (thankfully) will not unleash a deluge of President’s Day music, but it’s worth a listen at least once. At some points funny, other times tragic (looking at you “Never Asked”), it’s a humanizing look at many presidents that have been ignored and forgotten. “Potus” is available to stream on Spotify, YouTube and Apple Music.