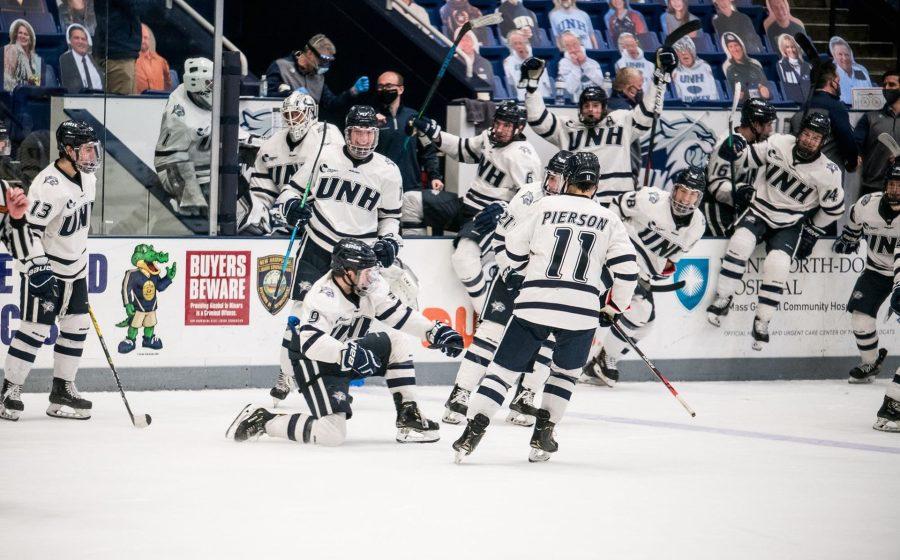 University of New Hampshire (UNH) men’s hockey (5-10-2) faced No. 20 University of Massachusetts Lowell (3-5) twice this past weekend. This was the first time all season the Wildcats were able to string together two wins in a series.

In the second period UNH extended its lead on a goal coming from junior forward Tyler Ward who one-timed a pass from first-year forward Nick Cafarelli giving UNH a 2-0 lead. The River Hawks fought back in the second with a goal of their own coming off the stick of senior forward Charlie Levesque cutting the Wildcats lead to one. UML outshot the ‘Cats in the period 9-8 and this time it was UNH who went 0-for-1 on the powerplay.

The third period was a back-and-forth affair where neither team wanted to give an inch. It looked like UML might tie the game up with a penalty shot at 7:38 in the third period but UNH senior goaltender Mike Robinson stood tall and saved the shot keeping it a one goal contest. UML eventually emptied their net trying to score the game-tying goal but UNH held onto the one-goal lead earning them the victory. Robinson made 25 saves in the game as UNH was outshot 26-19 and came out of the game with the W.

“That was a big sigh of relief,” said Souza. “I thought we had a great week of preparation. We carried over our play from Providence and we got outstanding goaltending from Robinson tonight. That was a big team win.”

The second game was much more eventful as the teams traveled back to the Whittemore Center. The sides combined for 13 goals in this contest.

UML took an early lead in this one as junior defender Chase Blackmun buried the puck in the back in the UNH goal giving them the early 1-0 lead. UNH battled back, however, as junior forward Angus Crookshank ripped a shot from the high slot tying the game at 1-1. This was just the start of Crookshank’s career night.

In the second, UML took an early lead with a goal from junior forward Lucas Condotta, but that lead didn’t last long. UNH scored on the penalty kill coming from junior forward Filip Engarås who found space in front of the goal and forced a backhander in the back of the net. The scoring didn’t stop there as UML scored two unanswered from sophomore forward Andre Lee and junior forward Reid Stefanson. The Wildcats answered before the end of the frame and it came from a tip off of Crookshank’s stick in the low slot cutting the lead to one.

The third period was the most eventful of the night as the River Hawks scored the first two goals of the period thus extending their lead to three. After the flurry of goals UNH pulled Robinson and replaced him with junior goalie Ty Taylor with 14 minutes remaining in the third. This was the boost UNH needed as they went on to score four unanswered goals the first coming from sophomore defenseman Kalle Eriksson who wristed a shot high glove side on the powerplay.

UNH earned another powerplay and took advantage of it by scoring another goal from senior forward Patrick Grasso who ripped one past the River Hawks goaltender from the faceoff dot. Grasso’s goal pulled UNH within one with 10 minutes still remaining.

Crookshank took the game over from that point on dangling around defenders and sent a wrist shot in front of the net to tie the game 6-6; this was Crookshank’s first collegiate hat-trick. He didn’t stop there as the two teams went into overtime. Just 17 seconds in, the junior walked in on a breakaway and finished the game with a shot high glove.

Robinson made 20 saves while Ty Taylor recorded three and earned his first win of the season. UNH special teams stood tall going 3-for-5 on the powerplay and only allowing one goal on five UML powerplays.

Souza didn’t think it was their best game of the year but was happy to get the win and thought the goaltenders were timely with their saves.

“True team win, it could’ve got away from us early on, but Robinson kept us in it,” explained Souza. “Then Ty Taylor comes in for relief and makes three big saves.”

He also gave high praise to Crookshank who totaled five points on the night.

“We had a clutch performance from the powerplay and Angus. He was outstanding tonight; I’m really proud of how our team played.”

Coming back from down three goals and winning is a character-building game and coach Souza feels they aren’t represented well by their record.

“I told our team that good teams find a way to win even when they don’t bring their best game. I truly believe we’re a better team than our record shows and I really mean that,” Souza said.