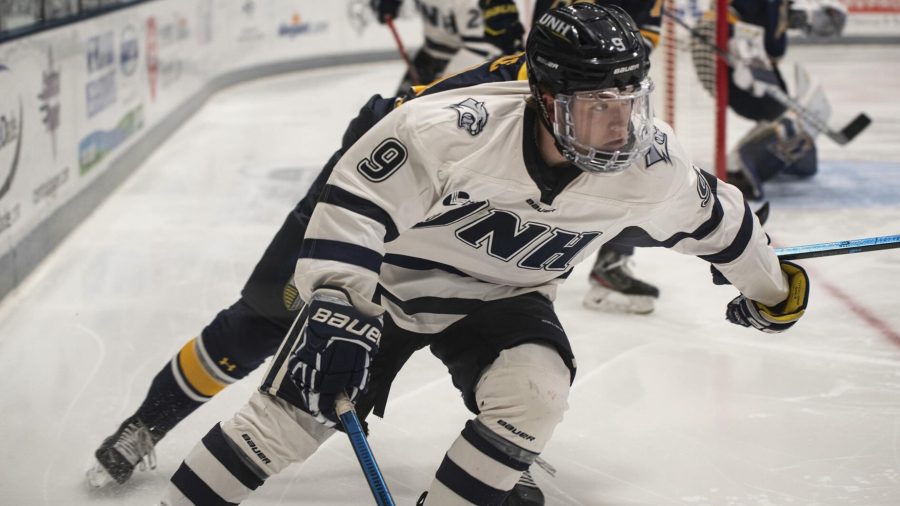 During this challenging season for the University of New Hampshire men’s hockey, it’s been tough for them to string together wins without some of their leaders and top talent like junior forward Angus Crookshank.

Recently, Crookshank got back into the lineup and eclipsed the 50-point plateau against the Providence Friars by tallying an assist and a goal in the weekend set. He has since separated himself even further with a five-point performance against UMass Lowell. Since coming to UNH in 2018-2019, Crookshank has played in 82 games and has tallied 20+ points in each of the previous two seasons.

Before coming to UNH, the North Vancouver native played for the Langley Rivermen in the British Columbia Hockey League (BCHL) where he played 77 games netting 32 goals and 35 assists for a total of 67 points. The Rivermen made the postseason in each of those seasons. He played in 13 total playoff games and continued his excellence there scoring 10 points, five of which were goals. In his final season with the Rivermen, Crookshank was selected to the top prospect game to compete with some of the top talent in the world.

Playing in the Hockey East alongside the best collegiate talent is nothing new for Crookshank, as he also has experience playing against the world’s best prospects in the World Juniors Challenge. Team Canada eventually won the gold medal with Crookshank. The win actually came off a game-winning goal scored by Crookshank to defeat team USA. After the World Juniors, Crookshank was drafted in the 5th round (No. 126 overall) of the NHL Draft by the Ottawa Senators hopefully adding to the long list of Wildcats in the National Hockey League (NHL).

Since joining the team in 2018, he has been one of the offensive leaders year in and year out. In his first season he posted 10 goals and 13 assists totaling 23 points, tying him for second on the team in goals and points. This helped him earn Hockey East All-Academic team and UNH Athletics’ Rookie of the Year.

Head coach Mike Souza spoke about the talent that Crookshank brings to the ice and what kind of player he is.

“He’s just a hockey player. I mean he had 12 or 13 shots the other night for our stats. He’s here all the time and we have to kick him out of here,” said Souza. “He just wants to be a player so bad and the more he’s developed into a 200-foot player the more effective he’s been.”

Souza realizes that Crookshank isn’t perfect and described what he could still improve on as a player.

“He’s continuing to work on his issues without the puck. The non-trained eye might miss some of his deficiencies without the puck, so those are things that we as coaches want to work on with him. His attention to wanting to be better and knowing that’s going to help him be a more offensively productive player,” he said.

He added, “He also represents the program incredibly well away from the rink. He’s in all sorts of things on campus like student advisory groups, commercials for the university, he’s well-spoken and he’s a great member of our program.”

It wasn’t just high praise from Souza that Crookshank was receiving, as assistant captain and recent line mate Eric MacAdams described what it’s like sharing the ice and locker room with him.

“Honestly, he’s a great talent and a guy to have on your team. Hockey is everything to him and for him to get rewarded with this milestone is a good thing to see,” MacAdams said. “We’re really proud of him and happy to see him adapt to the game here. We’re just all really happy for him.”

Crookshank has one more year of eligibility and will look to keep improving his game to try and make it to the next level and help UNH make a return to the postseason.

Photo courtesy of UNH Athletics: Junior forward Angus Crookshank (#9) using his body to protect the puck against a perusing Merrimack defender behind the opposing net.