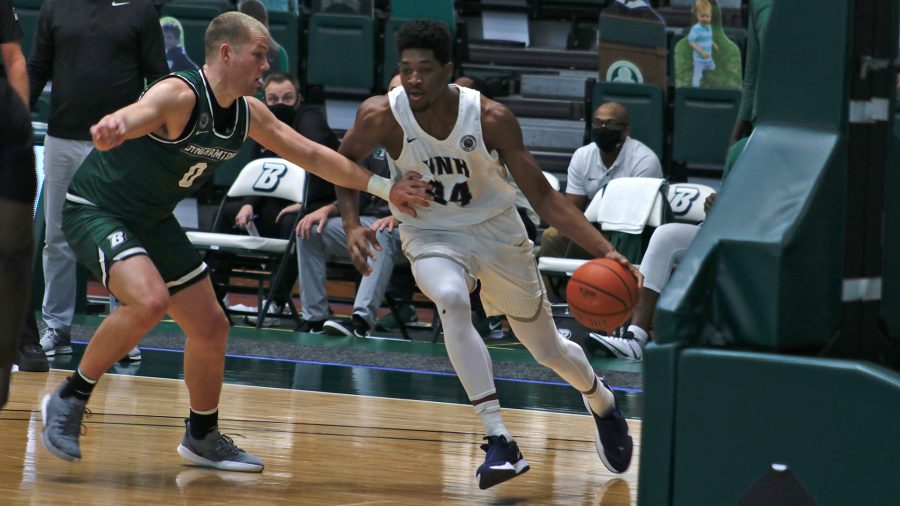 VESTAL, N.Y. – Much of the standing within the America East Conference remains up in the air as the season is about to hit its final stretch before the conference tournament. University of New Hampshire (UNH) men’s basketball (8-7, 7-5) had yet another opportunity to take a leap and solidify themselves in the top half of the America East. The Wildcats, however, failed to take care of business on a trip to the last place Binghamton Bearcats (2-13, 2-10).

UNH was on the heels of their worst loss of the season, losing by 19 points to the UAlbany Great Danes (4-6, 4-4 AE) on the second day of a back-to-back. A week of practice didn’t provide the answers head coach Bill Herrion and the Wildcats may have needed in this first matchup with the Bearcats. UNH lost by 21 points in the first game of the weekend and scored a season-low 44 points on the afternoon.

UNH was able to keep the game relatively close throughout the first half, only trailing by six as they went into the locker room and never allowed the Bearcats to get ahead by more than seven.

Binghamton slowly began to build on the lead early in the second half, however. A three-pointer from sophomore guard Brenton Mills put the Bearcats ahead by double-digits for the first time just three minutes into the half.

The lead steadily rose from that point as UNH found themselves in an eventual 26-point hole before losing by a final of 65-44.

Sophomore forward George Tinsley and Mills were the only two Bearcats to record double figures in points with 16 and 10 respectively.

UNH was still waiting for someone to answer the call and step up offensively with some players sidelined and others simply not producing as consistent as coach Herrion might prefer. Redshirt first-year guard Blondeau Tchoukuiengo was the leading scorer with 10 points and five rebounds.

The team’s offensive leader, junior forward Nick Guadarrama, scored just six points on 2-of-8 shooting from the field. It’s afternoons like this where it becomes evident that Guadarrama needs a consistent second option for this team to take their next leap. They’ve seen flashes from redshirt first-year guard Nick Johnson, and junior guards Marque Maultsby and Qon Murphy, but none have truly seized the opportunity to fill the shoes of senior guard Sean Sutherlin who has missed the entire season.

The player who has answered Herrion’s call most consistently has been junior forward Jayden Martinez. Martinez – who has quietly entered the discussion for America East Player of the Year – has now set a career-high in scoring twice this season. The most recent came on Sunday when the Wildcats split the weekend by defeating the Bearcats 71-65 in overtime.

Martinez came out of the gate hot, scoring the team’s first 11 points including three straight three-pointers. Binghamton kept UNH within grasp after Martinez’s burst and never let the Wildcats get ahead by more than seven in the first half. The Bearcats came back to take a two-point lead into the locker room.

Binghamton extended the lead to as much as eight points early in the second half. UNH didn’t tie the game until nine minutes into the half and never took the lead back until there was three minutes to play.

Guadarrama scored the equalizer with 40 seconds remaining to tie the game at 56 and send the game to overtime.

The Wildcats never trailed from that point on and went on to win by six and led by as many as eight in the extra period.

Martinez led with 24 points and 14 boards, notching his fifth double-double of the season. The forward from Cibolo, Texas is now averaging 13.1 points per game and 8.8 rebounds which leads the America East. He also leads the conference in total rebounds with 132 – 22 more than the next player.

Guadarrama scored 18 points to go with 10 rebounds – his third double-double of the season. The Connecticut native remains in the running for America East Player of the Year after his All-Conference selection before the season. He now averages 14.7 points with 6.8 rebounds which is good for third and fifth best in the conference respectively.

The Wildcats currently sit at fifth in the conference but are just one game within a top-three spot. America East is now announcing the schedule on a week-to-week basis as the season is entering its final stages. UNH will welcome sixth-place UMass Lowell (6-8, 5-5) into Lundholm Gymnasium on Friday and Saturday, Feb. 5 and Feb. 6, for a weekend series.