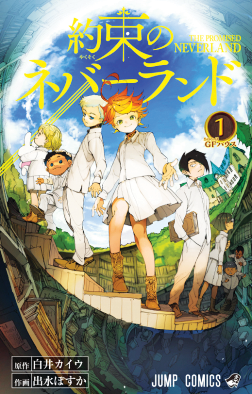 Generally speaking, I don’t read descriptions before starting to watch a show if the trailer or cover image is interesting enough. Perhaps this is my greatest flaw, as I haven’t learned my lesson despite being bamboozled by a book’s cover in the past. But surely, I thought, as I clicked onto “The Promised Neverland” on Netflix, surely it is not going to betray my impressions, right?

Forget that all I know about it is that it is getting a crossover event with “Identity V,” the game I’ve been playing religiously for months now and is definitely a horror themed game. I thought it was just going to be a cute anime about kids in a little idyllic paradise, maybe they get up to misadventures as they get adopted out but overall, a fun and cute show.

The first warning sign should’ve been when I saw it was rated TV-14 for fear, of all things. Now, what could be so scary about a bunch of orphans, thought I as I innocently enjoyed watching the children play games of tag and break house rules, as kids are wont to do.

Then a child gets killed to be served as dinner for the literal demons who are in charge of the orphanage (and quite possibly the world at large) and I went, “Oh no.” The fear of this being one of those shows that exist solely to torture and kill the cute characters was very prevalent as I hit next episode but slowly my worries were alleviated. Instead of being a torture-fest ala “Madoka Magica,” the first season offers a gripping and suspenseful plot where you are allowed to fret and worry about the characters but also be assured of their temporary well-being.

The three characters at the heart of the story are the oldest children of the orphanage – Emma, Ray and Norman. They are the ones who first find out what really happens to the kids who get ‘adopted’ and are the ones who primarily are orchestrating the escape attempt. It’s a classic trio scenario, Emma is the heart of the team, a hopeless optimist, while Ray’s strength lies in technology and street-smarts and Norman’s strategy is more reliant on booksmarts.

The older kids are portrayed as being super smart, but not in a way that lessens the suspense regarding their situation. At their heart, they are still kids grappling with a seemingly unwinnable situation and at times, their naivety regarding certain situations puts their plans in jeopardy. They are very much in a game of chess against their mother. The first season kept me guessing until the end if their escape was going to be successful or not, or if they’d even get to the point where an attempt could be made.

The animation itself is fairly standard. If you’ve watched a lot of anime, I don’t think there’s anything to really be impressed by in terms of style. It does have a great way of depicting extreme emotions that I think is very visceral and adds to the overall dark tone of the show.

In terms of music and sound design, the soundtrack is amazing. The opening is something that I would’ve watched every episode, if I wasn’t eager to get to the actual story. It’s ripe with imagery and motifs that you can see carry over into the show. Something to note: I watched the English subtitled version. I cannot speak to the quality of the English dubbed version.

If you’re interested in shows about children trying to defeat the odds, this one’s for you. “The Promised Neverland” season one is streaming on Netflix as well as Hulu and HBO Max. The second season has just started airing and is available from Funimation.