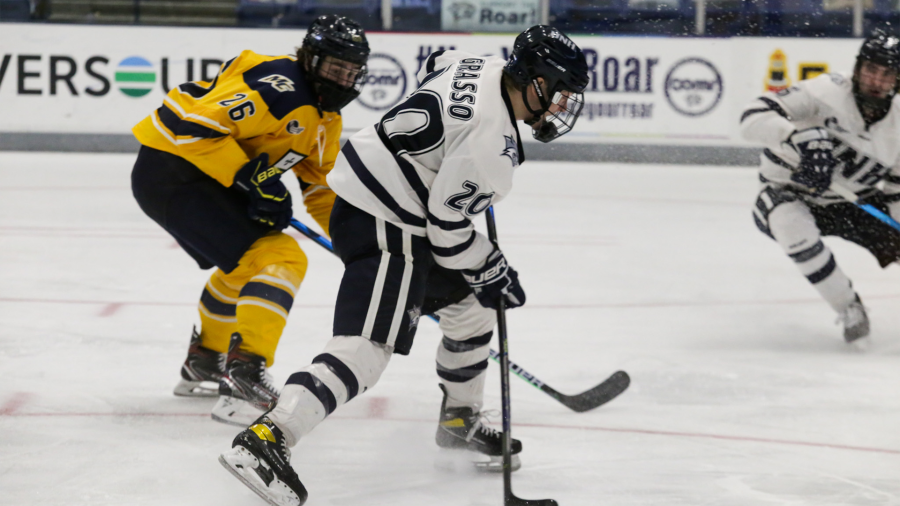 After losing a tough series against UConn (5-6-2), the University of New Hampshire men’s hockey team was looking for a bit of an easier series against the Merrimack Warriors (2-7-1). That, however, did not end up being the case and the Wildcats were punched in the mouth right away by the Warriors.

The Wildcats technically split the series with the Warriors, losing the first game 5-2 and winning the second in a shootout after tying in regulation and overtime.

UNH came out sleeping in the first period against Merrimack allowing an early goal, just two minutes into the game off of a rebound opportunity. It only got worse for UNH as Merrimack buried another before the end of the period making it a 2-0 Warriors advantage.

Merrimack kept the pressure on UNH in the second period, but senior goalie Mike Robinson came up with huge saves to keep the contest 2-0 until Merrimack broke through two more times, making it a 4-0 game headed into the third.

The Wildcats finally showed up on the offensive end six minutes into the third period when the ‘Cats went on the powerplay and senior forward Eric MacAdams buried the puck in the back of the net making it a 4-1 game. UNH showed a little bit more pushback later in the third when senior forward Patrick Grasso fired a shot that rang off the iron and, in the net, cutting Merrimack’s lead back down to 2.

However, the late offensive push was too little too late for the Wildcats as UNH gave up the empty netter making the score 5-2 in favor of Merrimack.

Robinson ended with 31 saves on the night meanwhile Merrimack’s first-year goaltender Zachary Borgiel only had to make 16 saves on 18 shots to secure the win.

Head coach Mike Souza was not pleased with his team’s performance in this bout.

“Our effort level is far from where it needs to be,” Souza said. “We weren’t hard on pucks, stick checking or in the right position. Not everyone but not enough guys playing the game the right way tonight. Merrimack outplayed us tonight, they did a nice job.”

This loss marked UNH’s fifth in a row as they have struggled lately finishing games against some of the league’s top talent.

“For me it’s nothing systematic, there’s no ‘ra-ra’ speech,” Souza explained. “It’s just a matter of us playing to our standards. Quite honestly I have to do a better job and my staff has to do a better job because it’s just not good enough right now.”

Luckily for UNH they got a rematch the next afternoon to prove that their effort level can improve.

The Wildcats started off slow once again allowing the first goal just six minutes into the contest giving the early lead to the Warriors. However, UNH’s offense didn’t sit idle as junior forward Tyler Ward scored his first goal as a Wildcat and tied the game at one.

The second period appeared to tilt in Merrimack’s favor totaling 13 shots and burying one but UNH answered with just 30 seconds left in the period. Grasso was the savior headed into the third period with the score even at two.

UNH didn’t do themselves any favors in the third period by obtaining a five-minute major penalty that gave extended powerplay time to Merrimack. The Wildcats stood tall as they killed off the major penalty and actually forced the game into overtime.

There was no decision in overtime which marked this game as a tie in the standings, but for the two points in the Hockey East the two teams went into a shootout. There, Grasso scored once again along with junior defenseman Kalle Eriksson putting the pressure on Merrimack. Robinson gave up one but came up with a huge save at the end to earn the ‘Cats two points they desperately needed.

Robinson showed up again in this one with 32 saves on 34 shots meanwhile Borgiel only had to make 21 on 23 shots. Despite being outplayed UNH found a way to squeak out of the series with two points.

The Hockey East has yet to release who the Wildcats will play next, regardless of the opponent they need to start stringing together some wins if they want to see some postseason action.