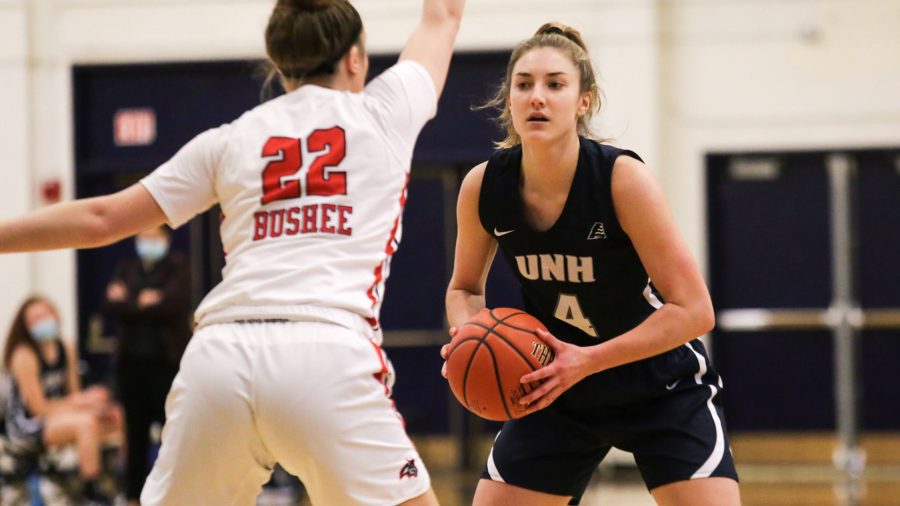 The University of New Hampshire women’s basketball team (4-9, 4-6) split a two-game series with Stony Brook (6-4, 4-2) over the weekend. The Wildcats looked sharp in game one, winning 52-49, but ran out of steam the following day, falling 64-41. This split marks the third series in a row in which Kelsey Hogan’s squad has won game one and been defeated in the second leg.

UNH took home a three-point victory in game one of the series with an impressive team performance. The Wildcats fell behind on several occasions and had to make big shots to knock off the Seawolves. Senior guard Amanda Torres hit a clutch baseline floater with 13 seconds to play.

Stony Brook started strong and outscored the Wildcats 13-9 in the first quarter and it looked as if UNH might have been off their game to start. The ‘Cats didn’t get the ball in the basket for the first three and a half minutes of action. Slow starts have been a concern for head coach Kelsey Hogan this year and the story was the same Saturday.

Things turned around in the latter half of the first quarter, which set up Hogan’s squad to come out firing in the second. Torres hit a three to make it a one-point game and scored the Wildcats’ first seven points of the quarter. She got help from first-year center Paige Cote, who went four-for-four from the free throw line and helped the ‘Cats get the lead. UNH pulled out in front before the half with a 13-6 second quarter and a 22-19 halftime lead.

The game opened up for both team’s offenses in the third quarter. The Wildcats had three triples in the frame, Torres notched her second of the game while Cote and sophomore guard Brooke Kane each added another. Stony Brook edged UNH in the quarter, scoring 21 points, and surging to a 40-39 lead.

UNH went down by six points with 6:41 to play, but the team clawed back within one with just over two minutes to play. The ‘Cats showed the mental toughness Hogan has continuously praised this season. After back-and-forth defensive stands, Hogan put the ball in the hands of her senior captain. Torres was cool under pressure and delivered a brilliant floater to take a 50-49 lead with 13 seconds remaining.

Stony Brook had a chance to win but missed two layups in the paint with under five seconds to play. A pair of free throws from first-year guard Adara Groman iced the game for UNH.

Coach Hogan applauded the mental toughness of her team postgame.

“I feel like I’m a broken record but the fight in our young kids, our young ladies, I am just so proud of them… We could have rolled over, we could have let it get away from us, but we didn’t,” explained Hogan.

Hogan was sure to mention her team’s perfect 14-of-14 free-throw shooting as well.

The Wildcats weren’t as sharp in the next game, however. Stony Brook came out guns blazing and secured a 10-point lead. The Seawolves kept the ‘Cats at arm’s length for most of the game, however.

Despite some strong surges from UNH, the Wildcats never led and Stony Brook closed out the game with a dominant fourth quarter.

Junior forward Ivy Gogolin led the Wildcats with 11 points and six rebounds with Kane following behind with eight points, an assist and a steal.

Hogan said the back-to-back days affected the team’s focus and the mental aspect, as they lacked focus at times.

“We’re still trying to figure out these back to backs,” said Hogan. “It’s been a learning process.”

UNH will look to refocus for their series against the University of Albany, tipping off Saturday, Jan. 23 at 2 p.m.