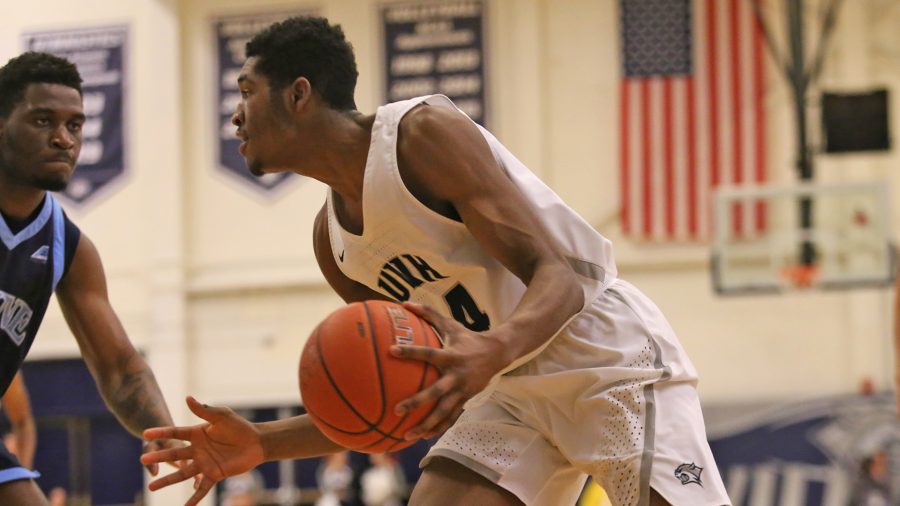 HAMDEN, CONN. – UNH men’s basketball dropped their second straight game in their final test ahead of their 2020-21 in-conference schedule. The Quinnipiac Bobcats took down the Wildcats by a final of 64-58 to improve to 2-2 while UNH fell to 1-2. Junior forward Jayden Martinez took on the scoring responsibilities as senior guard Sean Sutherlin remained sidelined and junior forward Nick Guadarrama missed his first game of the season.

The Bobcats jumped out to a 15-5 lead in the first five minutes before UNH was able to close the gap. Quinnipiac spread the wealth as six different Bobcats found the bottom of the net during the run.

After a Martinez three-pointer with 11:05 to play in the first half brought UNH within four, Quinnipiac responded with an 11-3 run to stretch the lead to 12; their largest lead of the afternoon.

Junior guard Marque Maultsby attempted to limit the first half damage as he sunk a floater right before the buzzer to send his team into the locker room trialing by just seven. Maultsby tied Tchoukuiengo with 11 points but added three steals to the box score.

A trio of jump shots from Maultsby, Martinez and first year guard KJ McClurg cut the Bobcat lead to just two points in the first few possessions out of halftime. This is the closest UNH got all day, however.

Quinnipiac led by as many as ten at the midway point of the second half and never gave up the lead. They were led by sophomore guard Brendan McGuire who didn’t miss a shot the entire afternoon. McGuire shot a perfect 5-of-5 from the field, including 3-for-3 from downtown and sinking each of his four free throw attempts. He ended with 17 points on 32 minutes played while adding four rebounds and four assists.

Coming in behind McGuire was first-year wing Tymu Chenery who scored 16 points, shooting 3-of-5 from three-point range and grabbing six rebounds.

Senior forward Jacob Rigoni put together a double-double with 10 points and 10 rebounds.

Head coach Bill Herrion noted that he was much happier with his team’s defensive performance on Sunday compared to the previous matchup with Bryant. Herrion described that game as one of the worst defensive performances he’s seen from this group. He explained that the team played solid enough defensively to win this game but couldn’t get enough shots to fall.

Martinez led the way with 17 points for UNH in a team-high 37 minutes played. The junior shot 2-of-6 from deep, blocked two shots and came down with 12 rebounds for his second double-double of the season. He’s now averaging 13.7 points per game, 9.7 rebounds and shooting 42.9 percent from three.

In a short preseason Herrion emphasized the importance of this game after the loss to Bryant. The team wasn’t able to organize any sort of scrimmage before the start of the season which made it tough for Herrion to evaluate what he had on his roster.

After three games, the Wildcats will head to Newark, N.J. where they will welcome NJIT to the America East. This is NJIT’s inaugural season as the 10th team in the conference. The Highlanders were previously a part of the Atlantic Sun Conference where they finished eighth out of nine teams a season ago.

Ahead of UNH’s in-conference schedule, Herrion says the biggest thing for the team right now is that they need to get healthy. Guadarrama missed Sunday’s game with a sore hamstring; Herrion dubbed the forward as day-to-day.

As for Sutherlin, the team isn’t quite sure on a timetable for the senior yet. Herrion noted that he may not be close to a return at this point.

In the absence of two of the team’s star players, Herrion will be relying on a lot of the young talent that’s shined through in the first three games of the season. He noted how productive Tchoukuiengo, McClurg and redshirt first year guard Nick Johnson have been.

The sides will play a two-game set on Saturday and Sunday in New Jersey in what will be NJIT’s first action of the season.