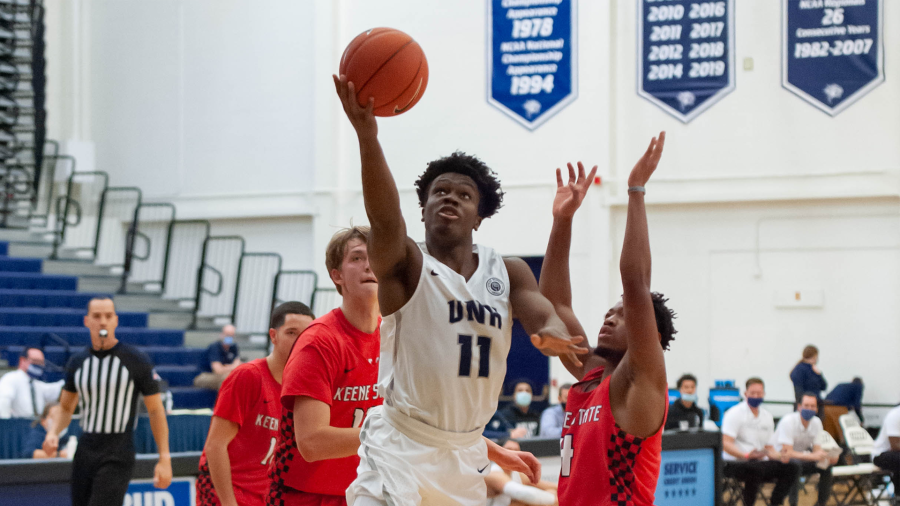 DURHAM, N.H. – The UNH men’s basketball team was back in action for the first time since March on Wednesday afternoon when they welcomed Keene State College into the Lundholm Gymnasium. The Owls were the first team the Wildcats have played since UMBC in the America East Tournament, and it showed in the first half. Led by junior Nick Guadarrama, UNH pulled ahead in the second half to win by a final of 93-54 leaving head coach Bill Herrion optimistic about the season ahead of them.

The Wildcats couldn’t buy a basket for much of the first half. The team wasn’t able to extend their lead over Division III Keene State to greater than five points until 3:40 remained in the first half. This also happened to be the first three-pointer the Wildcats hit in the game. Before the trey from junior forward Jayden Martinez, the team had shot a collective 0-for-8 from deep.

The team struggled a season ago in the first half of games. It wasn’t until the second half when the Wildcats were able to create separation most of the time and the same story was true on Wednesday. Coach Herrion cited the lack of practices and inability to truly evaluate the team to this point as a reason for the rocky start.

“It’s obviously different because there’s no fans allowed. You have to bring your own energy and your own enthusiasm. If you make a run maybe the crowd will get into it and energize your guys; we don’t have that,” explained Herrion.

Graduate student forward Chris Lester echoed what Herrion so often preaches to his team – defense. Lester says that the team needs to focus on getting to the first media timeout with a lot of stops and letting the offense play off of that.

Once Martinez broke the seal, his side began to pour on the points. The junior sunk back-to-back threes before junior point guard Marque Maultsby and first-year guard Blondeau Tchoukuiengo got in on the action to help build an 11-point lead at the half.

Guadarrama and the Wildcats came out of the locker room swinging as they turned their 6-0 run at the end of the half into 18 straight points. Keene went scoreless for nearly eight minutes before first-year guard Nate Siow knocked down a jumper to break up the run. The Wildcats answered with six straight points, however, extending the lead to 27.

UNH never let off the gas as they ended the game on a 15-5 run behind a trio of first-year players. Tchoukuiengo, KJ McClurg and Nick Johnson helped finish off the Owls and will prove as important pieces to the roster ahead of an unorthodox schedule.

A season ago, the Wildcats were hurt by injuries which led to Herrion playing with a short bench at times. The emergence of McClurg, Johnson and Tchoukuiengo – who was tied for the leading scorer with 18 points – allows Herrion more flexibility now that the schedule features back-to-back weekend games. Herrion went on to say he could go as many as 10 deep in his rotations.

“I think it’s big,” said Herrion regarding the depth of his roster. “I think we’ve got 10 guys who can all step on the court and be contributors at this level. It’s going to be hard for me to figure out the minutes and get playing time for guys, but I guess that’s probably a good problem to have.”

Along with the young players on the roster, the Wildcats saw the normal production from their experienced frontcourt. Guadarrama, Martinez and Lester combined for 41 points, 32 boards and six steals. Guadarrama tied Tchoukuiengo with 18 points and Martinez tallied his first double-double of the season with 14 points and 14 rebounds.

Herrion was without some of his most relied upon players in the team’s first game of the season. Senior guards Josh Hopkins and Sean Sutherlin were both held out of the game but aren’t expected to miss much time. Herrion described Sutherlin as day-to-day and Hopkins has been shooting but still is not 100 percent healthy. Maultsby was also pulled from the game in the first half after turning his ankle on a drive to the hoop. He didn’t return to the game and the severity of the injury isn’t known yet.

The Wildcats are tentatively scheduled to host the Bryant University Bulldogs in Durham on Tuesday afternoon for a 4 P.M. tip-off. Coach Herrion noted postgame that the possibility remains for the game to be moved up to Monday, or UNH traveling to Bryant on another day.