On the issues: Biden’s plans for office 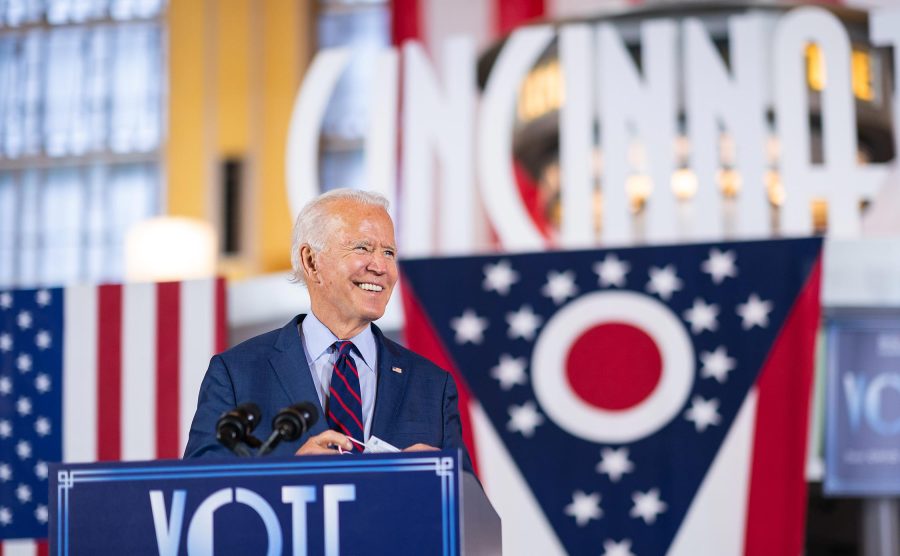 President-elect Joe Biden may have a little over two months before he officially takes office on Jan. 20, but his team has already begun outlining plans for his first days in office.

The Biden-Harris transition website currently identifies the future administration’s top four priorities as the coronavirus (COVID-19), economic recovery, racial equality and climate change. The website also asserts, “We aren’t just going to rebuild what has worked in the past. This is our opportunity to build back better than ever.”

Nevertheless, Biden may face opposition from a divided Congress. While the Democratic Party holds a slim majority in the U.S. House of Representatives, it is currently unknown which party will control the U.S. Senate. The outcome will come down to the two Georgia Senate races heading to runoff on Jan. 5. Georgia’s election law requires candidates to obtain over 50% of the vote and if this requirement is not met, as happened with the Senate races in early November, the top two candidates compete against each other in a runoff election.

The Democratic party, including Independents Angus King and Bernie Sanders as they caucus with the Democrats, currently has 48 seats while the Republican Party holds 50. The Democrats would need the two seats from Georgia to split the Senate evenly, which would then allow Democratic Vice President-elect Kamala Harris to vote as a tiebreaker.

However, University of New Hampshire (UNH) Political Science Professor Dante Scala, noted that “even in that best-case Democratic scenario, moderate Democratic senators will hold a great deal of leverage over public policy.” This may make it difficult for Biden to get support for his more liberal policies, such as those regarding health care.

“The advisory board will help shape my approach to managing the surge in reported infections; ensuring vaccines are safe, effective, and distributed efficiently, equitably, and free; and protecting at-risk populations,” Biden said in a statement on his transition website last Monday.

Biden’s proposed COVID-19 response calls for a variety of policies to be enacted at all levels of American society, including putting $25 billion into vaccine manufacturing and distribution, expanding testing, and creating aid packages for schools and small businesses. Biden also plans to expand use of the Defense Production Act, a law dating back to the Cold War to address supply needs that President Trump originally invoked back in March, to “ramp up production of masks, face shields, and other [personal protective equipment].”

The President-elect promises to take special steps to help protect populations that are especially vulnerable to COVID-19, such as the elderly and people of color. This includes the establishment of a COVID-19 Racial and Ethnic Disparities Task Force, proposed by Vice President-elect Harris, and a Nationwide Pandemic Dashboard that would allow Americans to gauge local transmission rates and help make informed decisions about precautions.

Biden has also outlined plans to forgive $10,000 of student loan debt per person, provide emergency sick leave, and free coronavirus treatments and vaccines as part of a COVID-19 relief bill.

Finally, Biden intends to rejoin the World Health Organization (WHO), from which President Trump withdrew from in July.

Biden intends to raise corporate income taxes to 28% – a 7% increase from the Republican tax cuts in 2017. However, under Biden’s larger proposed tax plan, he assures that Americans making less than $400,000 will not have their taxes raised.

The Voting Rights Act of 1965 was a law passed to reinforce voting rights already granted by the U.S. Constitution. The act was spurred on by Bloody Sunday, when Alabama state troopers attacked hundreds of citizens protesting the disenfranchisement of Black Americans.  However, key sections of the act were deemed unconstitutional by the U.S. Supreme Court. This included Sections 4 and 5 that “required that jurisdictions with a history of racial discrimination [to] seek federal approval before changing their voting laws.” This requirement would help stop jurisdictions from disfranchising citizens because of their race. Efforts by Congress to reinstate these sections have stalled and Biden has advocated for the extension of the act.

President Trump’s decision to withdraw the United States from the 2016 Paris Agreement regarding climate became official this month after the mandatory one-year waiting period from the United Nations. Biden has promised to rejoin the agreement throughout his campaign.

The issue of police reform has become one of the main issues this election cycle after the death of George Floyd and the nationwide protests over the summer. Biden has indicated his plans to create a national police oversight commission. This includes a $300 million investment in community-based policing.

“I’ve long believed we need real community policing,” said Biden in an interview with CNN. “We need each and every police department in the country to undertake a comprehensive review of their hiring, their training, and their de-escalation practices.”

Although not identified as one of the top priorities on the Biden-Harris transition website, many of Biden’s early policy goals focus on immigration reform. The President-elect has pledged to legislation that would open up a pathway to citizenship for 11 million migrants who live in the U.S. illegally. This includes citizenship pathways for DREAMers, children who were brought into the U.S. illegally by their parents, who are currently a part of the Deferred Action for Childhood Arrivals (DACA) program. Part of this effort would be making the DACA program permanent.

Biden also plans to reverse some of President Trump’s immigration policies, including the separation of parents and children at the U.S-Mexico Border. Biden intends to sign an executive order to create a task force to reunite separated families. He also promises to rescind Trump’s executive order banning travelers from some Muslim-majority countries.

One of the President-elect’s long-term plans is setting the United States on a path to reach zero carbon emissions by 2050. He also hopes to achieve a “carbon pollution-free power sector by 2035,” through focusing on creating clean American-made energy.

The overall proposal calls for a $2 trillion investment “to boost reliance on clean energy and climate sustainable practices.” American infrastructure, housing, agriculture and conservation, and environmental justice are some of the areas the these plans may focus on.

The President-elect has proposed multiple plans that would affect all levels of American education. One policy for post-secondary education advocates making public colleges and universities tuition-free for all families with incomes below $125,000.

Photo Courtesy of the Biden-Harris administration