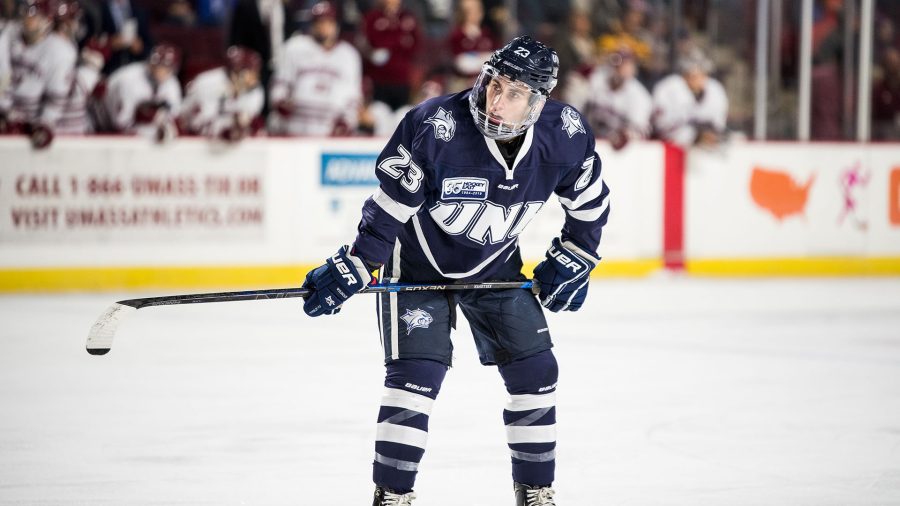 Opening weekend is upon us for both UNH men’s and women’s hockey as they make their long-awaited return to the ice in the Whittemore Center.

“In a year with so many challenges, leadership is of the utmost importance,” said head coach Mike Souza. “I couldn’t be happier that the team has selected these four individuals to lead them this year.”

He added “Charlie [Kelleher] has been around the program for a long time especially with his brother being committed well before [Charlie] came here so the Kellehers know what the program is about. It was inevitable that he would be named captain and the leadership has been tremendous.”

In 93 games for the Wildcats Kelleher potted 13 goals and 50 assists. He leads all current Wildcats in assists and after a career high year for points last year, 23. He’ll be looking to replicate the same production this season.

As for alternate captains Grasso, Maass and MacAdams: Grasso has played 115 games for the Wildcats in his career tallying 42 goals and 40 assists tying him for third in the nation in career goals among active players.  Maass, the Washington Capitals draftee, has played 100 career games totaling 33 points for eight goals and 25 assists. MacAdams has 32 points over 94 games for 14 goals and 18 assists.

The Wildcats missed the postseason a year ago after going 15-15-4. The road won’t be any easier this time around as their entire schedule is comprised of Hockey East opponents – the conference which is widely regarded as the best in college hockey.

“You just never know in our league,” said Souza. “That’s why I think it’s the best league in hockey. There’s so much depth from the top to the bottom and you look at the standing of the league last year and it was legitimately right down to the last weekend for a push for the postseason.”

He continued “this year I don’t expect anything different if we’re fortunate enough to play a complete schedule.”

The Wildcats will be without the energy of the fans in the Whittemore Center this season, but they still encourage fans to tune in and show their support.

“It’s going to feel different but once we get in the game and in the flow of things, I feel like we’ll settle in. It’s going to be weird without fans, we are so appreciative of everything they do and all of the support they give us. So, it will be different, but I hope they tune in to NESN and watch us play,” said Kelleher.

UNH will kick off their season in Chestnut Hill against No. 2 ranked Boston College Eagles and then the next night will travel back up to Durham to face the Eagles at home.

“We’re just excited to play, we try to bring a faceless opponent mentality with the way we do things here. Our guys are eager to get back on the ice but it’s a real test to see where we are against arguably the best team in the country,” explained Souza.