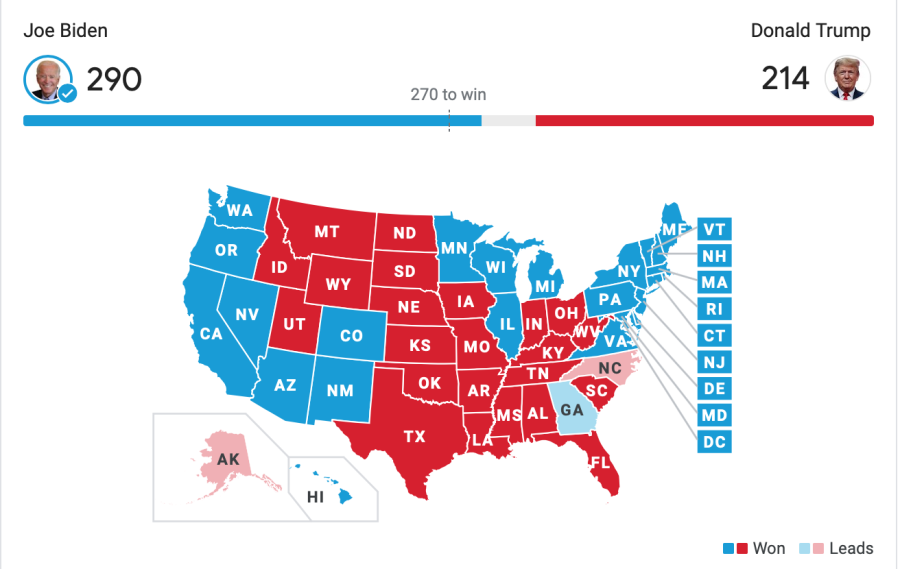 America has spoken – Donald Trump will be a one-term president.

At 11:25 a.m. on Saturday, Nov. 7, the Associated Press (AP) called the state of Pennsylvania for former Vice President Joe Biden, which put his total Electoral Votes at 284 and secures him the presidency.

“I pledge to be a president who seeks not to divide but unify, who doesn’t see red states and blue states, only sees the United States,” said Biden in a victory speech Saturday night. He renewed his call to restore the soul of the nation, and outlined his top priorities once taking office, with an emphasis on hope, unity, healing and bipartisanship.

Current President Donald Trump has not conceded the presidency, and has pledged to pursue a legal battle.

The Trump campaign put out a statement earlier today. “The simple fact is that this election is far from over. Joe Biden has not been certified as the winner of any states, let alone any of the highly contested states headed for mandatory recounts, or states where our campaign has valid and legitimate legal challenges that could determine the ultimate victor,” they wrote.

“Beginning Monday, our campaign will start prosecuting our case in court to ensure election laws are fully upheld and the rightful winner is seated,” the Trump campaign wrote.

Additionally, Sen. Kamala Harris made history as the first woman, first Black person, and first South Asian person ever elected as vice president. “While I may be the first woman in this office, I will not be the last. Because every little girl watching tonight sees that this is a country of possibilities,” she said tonight.

At the time of writing, Biden has 290 electoral votes and Trump has 214, according to the AP. The states of North Carolina, Alaska and Georgia have not yet been called.

Trump has not conceded the election, and it is unclear if and when he will do so. However, concession of the race is not required by the Constitution or any other document.

Biden received over 270 Electoral Votes, making him the President-elect.

“Let us be the nation that we know we can be. A nation united, a nation strengthened, a nation healed: The United States of America,” Biden said.

Photo courtesy of the Associated Press.