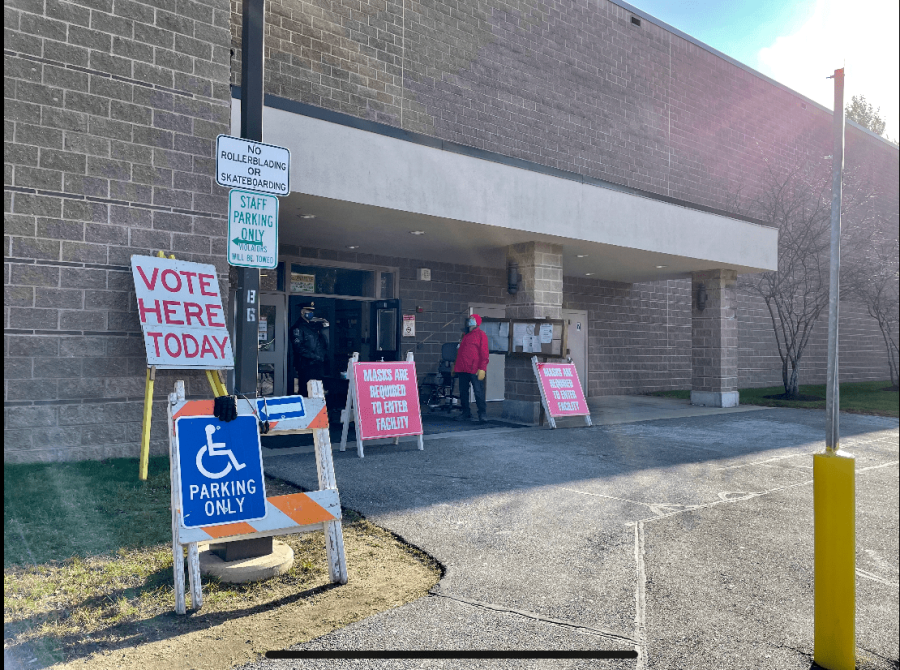 Durham, NH — University of New Hampshire (UNH) students flocked to the polls on Election Day. Oyster River High School (ORHS) was bustling with voters and electioneers. Faces were covered with masks, but spirits remained high. Coffee was served and buses shuttled students back and forth from campus to the polls.

Katie Carr, a sophomore at UNH, said she was expecting long lines to cast her ballot but ended up not waiting at all. That seemed to be the case for most voters, which included approximately 1,300 same-day registration balloters, who decided to vote in person. People trickled in and out of ORHS’s gymnasium. Many proudly flaunted an “I Voted” sticker.

Carr and her friend, UNH sophomore Parker Botsch, said that while they had no trouble when it came to casting ballots, they were still worried it might not matter who they voted for. “I’m definitely worried for the aftermath of this election,” said Botsch. One of the reasons Carr and Botsch voted in person was because they think that mail-in ballots may not be counted at all. The two have concerns that President Donald Trump will claim that most mail-in ballots are fraudulent, and they will be cast aside. “It’s a little bit scary,” said Botsch.

Botch’s weariness was not shared by all students, however. Lela Jones, a sophomore at UNH, thinks that there will be a peaceful transition of power if her preferred candidate, Joe Biden, wins. Jones is more concerned with how long it might take to have an official winner. “I wouldn’t be surprised if there were some lawsuits,” she said. Jones noted that the increase in mail-in ballots could draw out the election even further.

Carr echoed Jones’ sentiment, saying, “I think it will take several days. I know people who were still mailing in their ballots yesterday.”

Nationwide, the number of mail-in ballots has reached nearly 100 million according to the New York Times due to the coronavirus (COVID-19) pandemic. Jones said that she wanted to vote in person because so many people couldn’t. “That’s kind of why I came to vote in person today. Luckily, I have the privilege of coming to vote in person. I know some UNH students don’t have that ability.” Jones wants to see a change in Washington D.C. and said that was her main motivation for voting.

Jared Jasseman, a UNH student, said that he voted because he wanted to make an impact. “I feel like I can’t just sit on my couch and complain about something if I don’t have a say in it,” he said. Jasseman did not know what to expect at the polls because it was his first-time voting. “I had to wait a little bit in line, but I feel that’s mostly because of COVID-19 that the line seemed longer than it is,” he said. Overall, the UNH student had a good experience at the poll. “I’m very glad to be in a peaceful place like [Durham] where people can say and believe what they want and it’s totally okay and not have to board up windows,” he added.

Hustling through the strong winds at Oyster River High School’s parking lot was UNH student Julian Maduro, who believes that voting is always important. “I think especially with this election we’re kind of on a pivotal turning point. People are unhappy and I think during unrest is the best time to make a change,” she added. The experienced voter was pleased with how her voting experience went for this election. “They did it very quickly and they did it very efficiently, so it met my expectations,” she said.

When asked about future expectations of the outcome of this election, Maduro believed that there will be “a lot of unrest and unhappiness” regardless of the result. “I think it’s going to be really weird because of all the mail-in voting, so I know a lot of people that don’t even know when we’re going to have the final result,” she explained.

Regardless, the Joe Biden supporter felt “privileged” to be living in a place such as Durham and not elsewhere during this time of the year. “People are scared to go vote or even leave the house after [the election]. I’m just really glad we don’t have to deal with that here,” said Maduro.

Durham Town Administrator Todd Selig was impressed with the student turnout overall, but he thinks that many potential young voters cast mail-in ballots from their home addresses, which lessened the attendance.