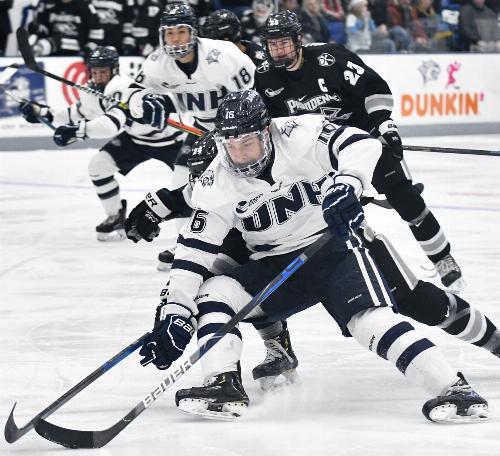 On Wednesday October 7 the NHL draft took place and UNH saw a couple of their own come off the board to a pair of NHL franchises. Defenseman Luke Reid and forward Filip Engarås were both drafted last Wednesday night in the sixth round.

Reid was the first Wildcat off the board in the sixth round going to the Nashville Predators 166th overall. Reid is about to start his freshman season after playing for the Chicago Steel in the USHL from 2018 through 2020. Reid totaled four goals and 34 assists for 38 points through 105 games. He is coming off a year in the USHL where his team claimed the regular season title. Reid was also named to the U.S. Junior Select Team for World Junior A Challenge where he helped his team win a bronze medal. The six-foot Saskatchewan defenseman is looking to bring that talent on to the ice in the Whittemore Center.

Reid’s new teammate Engarås was drafted just three picks later by the Edmonton Oilers at pick 169. Engarås is a returning junior for the Wildcats. Last season Engarås netted eight goals and seven assists for a total of 15 points. The Sweden native played three seasons for Skellefteå AIK in his home country and was a captain for two of those years. Over that time, he posted 28 goals and 28 assists for 56 points in 93 games for the U-20 team. He also appeared in 19 games for the Sweden International junior team. During those 19 games he potted four goals and three assists for seven total points.

“We are very excited for both Filip and Luke,” said UNH head coach Mike Souza. “The Oilers and the Predators each drafted a prospect that they can be very proud of. Our coaching staff is excited to share in their development.”

UNH now has six current NHL draft picks on their 2020-2021 roster. They join senior goalie Mike Robinson, senior defenseman Benton Maass, junior forward Angus Crookshank and junior goalie Ty Taylor. Robinson is the highest draft pick out of the six going 86th overall to the San Jose Sharks in 2015. Meanwhile, Maass was drafted in 2017 as the 182nd pick overall by the Washington Capitals. Crookshank and Taylor were taken in the same draft in 2018 but by different teams. Crookshank was taken 126th overall by the Ottawa Senators and Taylor was taken 214th overall by the Tampa Bay Lightning.