On the issues: Sununu and Feltes 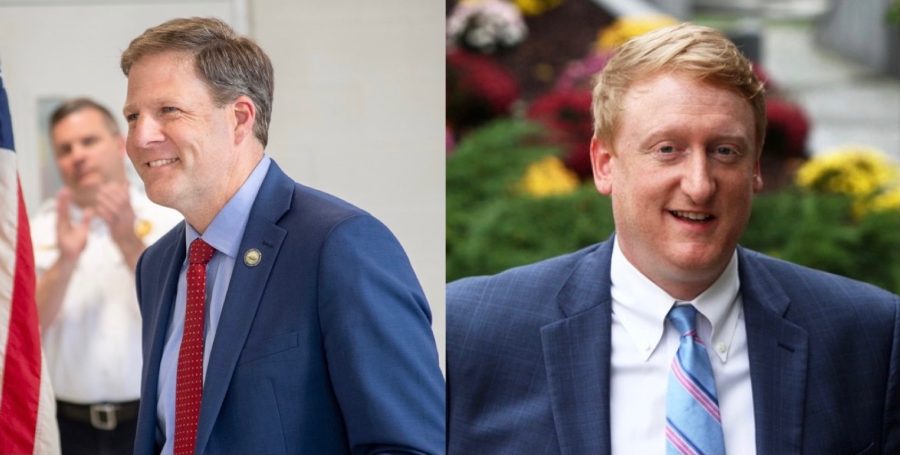 As the election approaches with less than three weeks to go, many first-time voters feel stressed, overwhelmed or unsure of the voting process and who is running for each district, seat and party. This article will focus on the gubernatorial race in New Hampshire, the candidates and their positions on issues students are affected by or care about. This is not exhaustive, so be sure to do your research before voting. Some good sources are campaign websites, fact-checking sites, other news organizations and other sites tracking politicians and the 2020 race.

New Hampshire is one of only two states where governors serve two-year terms. Gov. Chris Sununu is currently serving his second term, and state Sen. Dan Feltes is hoping to turn the Governor’s office blue again.

Also on the ballot is Darryl Perry, the Libertarian Party’s nominee for governor.

Feltes is currently the Senate Majority Leader in the N.H. State Senate, where he has served for three terms. Prior to this, Feltes was a legal aid attorney with N.H. Legal Aid Assistance, where he represented low to middle income families, veterans and seniors, directed the Housing Justice Project and more.

Prior to his time as governor, Sununu owned and directed Sununu Enterprises and was chief executive officer of Waterville Valley Ski Resort. He worked on the New Hampshire Executive Council for six years before he was elected governor. His father John H. Sununu was Governor of New Hampshire and White House Chief of Staff under George H. W. Bush, and his brother, John E. Sununu was a U.S. Representative for New Hampshire’s first district and a U.S. Senator.

Both candidates discussed their thoughts on the University of New Hampshire (UNH) campus reopening plans.

Sununu said the system has worked as planned, and while there have been incidents of the coronavirus (COVID-19) they have been manageable. He acknowledged the national recognition UNH’s testing facilities have received. “As we go forward, everyone must remain vigilant to ensure we can continue operations safely. This includes wearing masks, maintaining social distancing, avoiding crowds and maintaining hand hygiene,” he said in an email with The New Hampshire.

Feltes said that he doesn’t believe it was appropriate for the university to require the signing of a waiver. “I think anybody’s rights should maintain, including students. Obviously, they’re going through the process and it remains to be seen, but it [their reopening plan] was much more of a plan than Chris Sununu did for our local schools, which was nonexistent.”

One issue on which the candidates differ pretty significantly is gun control law or gun reform.

In regards to gun reform and gun control, Gov. Sununu does not support making changes to existing Second Amendment gun laws in New Hampshire. He cited the state’s “tradition of responsible firearms stewardship,” according to WMUR.

Feltes has supported “common sense” gun safety measures, including several State Senate bills – HB 109 that would close background check loopholes, HB 514 that would create a waiting period after purchase and HB 564 that would ban guns from schools property, creating “gun-free zones.” All three bills were vetoed by Sununu.

Both candidates outlined their work and efforts around diversity, equity and inclusion in New Hampshire.

Feltes emphasized that many policy areas are related to racial justice, and how many laws and regulations disproportionately affect communities of color. He cited his management of the Housing Justice Project and work with the Manchester NAACP among other groups, working against housing discrimination in New Hampshire. In the State Senate, Feltes worked on criminal justice reform and bail reform, which he said disproportionately impacts communities of color. Additionally, he believes the criminalization of marijuana has been a “disaster” and has had particularly adverse impacts on communities of color.

As governor, Feltes would create an Office of Racial Equity to identify policies that have a disproportionate impact on communities of color, including health care, economic and criminal justice disparities. “The first step in combatting systemic racism is acknowledging that it exists, and Chris Sununu fundamentally won’t even do that,” said Feltes.

In an email with The New Hampshire, Gov. Sununu said he has made diversity and inclusion a priority in New Hampshire since his first term. He cited his creation of the first Civil Rights Unit in the NH Department of Justice (DOJ) and the Governor’s Council on Diversity and Inclusion. This year, Sununu established the COVID-19 Health Equity Response Team to look into the virus’ disproportionately negative impacts on vulnerable communities. Following the death of George Floyd, Sununu formed the New Hampshire Law Enforcement Accountability, Community, and Transparency Commission with hopes of reforming the state’s law enforcement system. Additionally, Sununu signed an executive order with numerous police reform measures, including mandatory body camera use for state police. Sununu also established a Public Integrity Unit within the DOJ to look into cases of police misconduct.

Health care access as well as reproductive health care have been one of the biggest policy conversations this election cycle, and the New Hampshire gubernatorial race is no exception.

Feltes also labels himself “pro-choice,” and as governor would “protect a woman’s right to a full range of reproductive services including safe, legal abortion.”

“States are more important now than ever in protecting women’s health care and reproductive freedom, Dan worked to ensure that the state provided resources for women’s health centers that were losing funding because of the Trump administration’s unjust Title X Gag rule…  Dan has fought for Planned Parenthood every step of the way,” according to his campaign website.

In terms of climate and the environment, both candidates have prior experience.

Sununu, a former environmental engineer, has worked to ban offshore gas and drilling along the N.H. seacoast, filed lawsuits to hold companies accountable for pollution to the environment, supported expanded access to net metering and issued an executive order in preparation of the development of offshore wind technology, and more, according to his campaign website.

Feltes has also worked on clean energy, including his role as Vice-Chair of the Energy and Natural Resources committee in the state Senate. Feltes has also worked to expand net metering in the state, delivered the state’s first community solar measures, promoting clean energy jobs and more. “We need to do everything we can at the state, local, and federal level to combat the climate crisis — and turn this crisis into an opportunity to create thousands of good paying jobs with good benefits,” according to the campaign website.

Both Sununu and Feltes explained issues or accomplishments that were important to them, and why they were seeking the role of governor of New Hampshire.

“I’m not running to be governor, I’m running to serve as governor to look out for working people and working families, and to make sure that the issues and values we just talked about are advanced,” said Feltes. He emphasized the importance of the issue of paid family and medical leave. He believes this policy is particularly critical during the pandemic – to take care of yourself and family without risking your job and “economic livelihood.” He said that Sununu has vetoed paid family leave insurance bills twice and noted that Sununu auctioned off a copy of one of his vetoes of paid family and medical leave insurance at a Republican fundraiser last July “to the highest bidder.”

“We’ve put a great team together for this state, and provided the leadership necessary to guide New Hampshire through these unprecedented times. Many of our biggest challenges still lay ahead, and in 2021 New Hampshire will need the management experience to promote businesses, keep New Hampshire safe, and invigorate economic opportunity for families… Others just talk, I believe in results. Let’s keep getting the job done,” said Sununu. He cited the return of $180 million to N.H. municipalities for infrastructure including bridges, roads and safer schools, which is more than any administration in history, according to Sununu. He also noted his vetoes on income tax, and stop of additional gas taxes and toll increases. “We will balance our budget and manage our state finances the right way, without any new taxes,” he said.

There has not been much recent polling on the gubernatorial race in New Hampshire – potentially because the state primary was only about a month ago.