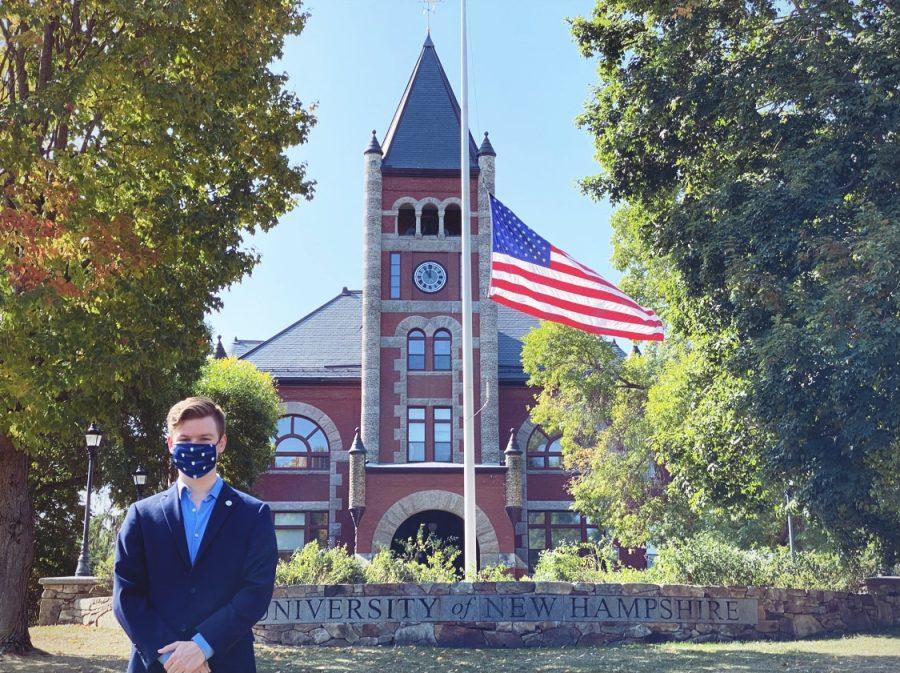 Public health, transparency, and improving diversity, equity and inclusion on campus were the main goals laid out by the University of New Hampshire’s (UNH) Student Body President, Nicholas Fitzgerald.

Fitzgerald has been working with UNH to voice students’ opinions. Speaking with The New Hampshire, Fitzgerald talked about his earlier life, including high school experiences and also behind the scenes of becoming the student body president of UNH.

Fitzgerald grew up in the small and rural town of Silver Bay, NY. With only about 200 people residing in the town, Fitzgerald’s childhood memories are often with his younger brother.

“We definitely have that stereotypical sibling rivalry, but we bonded well with each other since we were the only two kids in the area,” he said. Aside from that, he also said that having his cousins as his neighbor also made their family “grew closer together rather than farther apart.”

When asked about the person that he looked up to the most, Fitzgerald replied that his mom influenced him greatly since she was significantly involved in his life.

“She’s always there and always supportive,” he said. He described his mom as having set a good example for him to follow in both personal and professional life. “She’s definitely a lot of where the hardworking nature from me comes from,” he added.

Much like the town he grew up in, Fitzgerald went to a small high school in Ticonderoga where his class size consists of only 76 people. However, being in a small school gave Fitzgerald the opportunity to get to know everyone. “I treated everyone as friends and likewise,” he said.

Fitzgerald excelled academically from a very young age. Apart from being an honor student in high school, he was also involved in club activities and all-seasonal sports. By the time he was a senior, Fitzgerald was the president of a few clubs such as Quiz Bowl, Youth in Government, and the Drama Club.

Despite the high level of engagements, Fitzgerald described himself as an “extremely shy person in high school.” Though, one of his favorite memories from high school was being involved with designing the junior prom.  He described the experience as “shocking” because he was always used to being the “background person.”

“I wasn’t doing it for the recognition, I was doing it because it was fun and I respect my class and wanted them to have a good time,” he said.

Going into college, Fitzgerald knew that he wanted to be a part of the Student Senate. “That is what I did in high school and I see no reason why I wouldn’t want to do it at UNH,” he said. He explained that he ran to be a student senator for his residence hall, Richardson House, during his freshman year but lost the position to a junior. He then decided to join the Campus Living Association (CLA) because of his strong drive to represent students.

During his sophomore year, Fitzgerald held the national communication coordinator position at CLA. He explained that one of his major duties in this role was “making connections with other schools to build up our ceiling to look a lot more like theirs.” He added, “This position has taught and given me a lot of experience to be a leader.”

But before Fitzgerald was the student body president, he served as the president of CLA. “The reason why I became the president of CLA was that I saw the potential in CLA and representing the whole council and really governing them. There hasn’t been a government [in CLA] prior, so I ran for president there to help shape it into the kind of organization it is today,” he said.

Fitzgerald stated that CLA is a government organization that was “under the radar.” To have better relationships with other student governments, he worked closely with previous Student Body President, Allie MacPhee, and Student Body Vice President, Kelsey Crowley, along with other student senators to bridge the gap between CLA and the Student Senate.

Fitzgerald described the process as “difficult.” Nonetheless, there was progress and through working closely with the Student Senate, he felt comfortable running for student body president.

Even though Fitzgerald and Student Body Vice President Tyler Silverwood ran unopposed, he clarified the fact that they ran in the midst of a pandemic which would result in an increase of work. However, Fitzgerald was determined to run for president at that time to fulfill his vision. “I have a vision of a more unified student government, where all the governments work together to increase student’s voice,” he said.

Fitzgerald’s drive and motivation to serve as a student body president came from his family. “My family has a bit of a legacy when it comes to public office in our town. My grandfather was on the town board and my father is on both the town board and the school board,” he explained. Additionally, Fitzgerald wanted to make his family proud as he believes that he has the same sense of leadership and determination spirit as his family.

When asked about the transition from a “background person” to being the student body president, Fitzgerald said that the most alarming thing is the “publicness” of it. “The job itself runs much like any other leadership job. It is the interviews and having a picture of me as part of the public health campaign that sometimes caught me off guard,” he said.

But just like any other student, Fitzgerald’s number one priority is to balance between academics and his job. “Sometimes I do get carried away and put my job first, but I am here first and foremost as a student and therefore, academics are more important,” he claimed. Fitzgerald is double-majoring in political science and history, and minoring in in anthropology and Native American and Indigenous studies.

In addition to the heavy academic workload, Fitzgerald is also a trumpet player for the UNH Marching Band. One of his greatest achievements, aside from winning the position as the student body president, was the awards that were given to him by the UNH Marching Band. “They might not know this, but every time I get an award, I get so overwhelmed with happiness because it’s not something that I asked for; I don’t ask for awards,” he said.

Fitzgerald’s hope for the future is to continue working on the main goals that he had laid out in May. However, he said that his biggest goal after the reopening of UNH has been the increase of diversity, equity and inclusion on campus which he believes will kick off with President Dean’s town hall.