Durham mural to get makeover from local artists 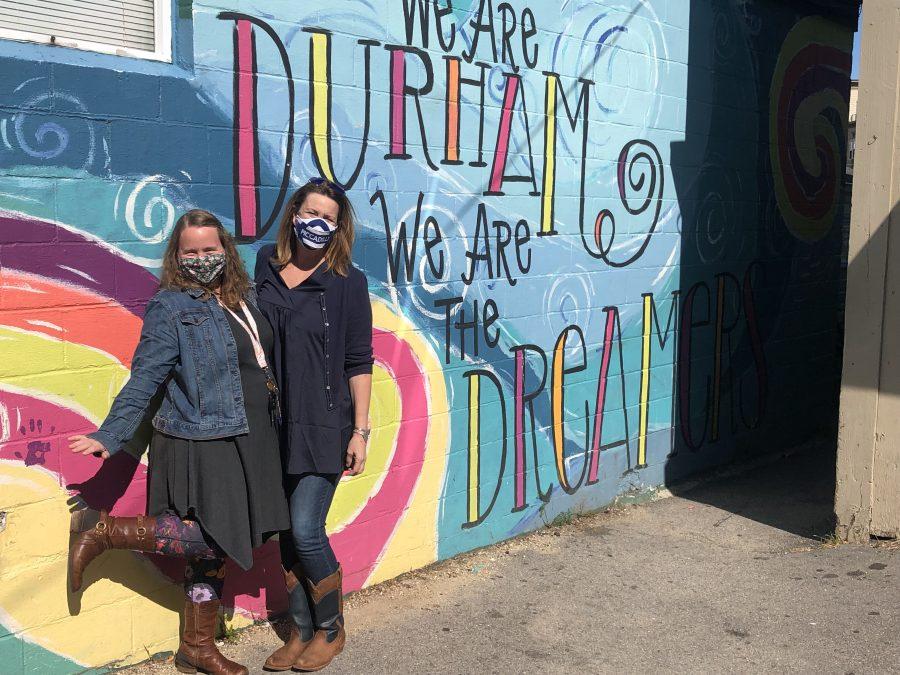 After six years of providing a backdrop to countless photo shoots, one of Durham’s popular murals is getting a makeover for a special cause.

Nestled between Durham House of Pizza and Hayden Sports lies a bright piece of local art. The entire wall of the alley is covered in flowers made from the handprints of about five-hundred people. According to Sarah Grandy and Katherine Norling, owners of Main Street Makery and Van Claus Designs respectively, the mural has its roots as a community project. They’re the masterminds behind this artwork, in addition to the second mural on the opposite side near Hayden Sports. Not once in six years has the mural been defaced, unless you count loving additions such as googly eyes on the owl and butterfly stickers on the flowers. According to Norling, it’s a testament to how much people respect the art.

Now, it’s all being painted away. They’re dividing the entire wall into two-foot by two-foot sections and selling them off to local artists. All proceeds are going to End 68 Hours of Hunger, a charity organization committed to providing meals to underprivileged students on the weekends when schools cannot provide food.

The spots went up for sale on Sept. 17, and have almost completely sold out. Artists have license to paint to their heart’s content within their square. At least two University of New Hampshire (UNH) senior art students are participating, with a total of 28 artists coming together so far to make this fundraiser a reality.

“It’s our way to give back to the community,” said Grandy. “As a business you’re always thinking, what’s something I can do to my direct community. By creating these murals it’s such a visual and impactful moment.”

In addition to the mural-makeover, Roger Hayden, who owns the wall, gave permission to extend the mural further back onto the fence and a connected small building.

A spokesperson for the Oyster River End 68 Hours of Hunger branch said they’re thrilled to see the results. They’re always looking for in-person donations to their food pantry in addition to local fundraisers like this mural. Every family that approaches them gets sent home for the weekend with food. With the winter approaching coupled with the pandemic, they expect to see an increase in families enrolled.