COVID-19 to have long-term mental health effects on students 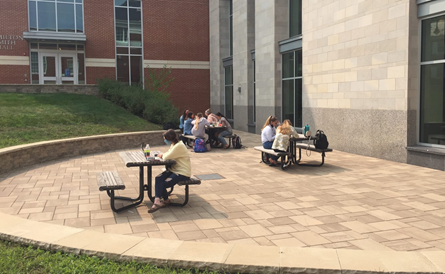 “This is a disaster.”

That was the overwhelming thought in freshman studio art major Jamie Landry’s head as she stared blankly at her open laptop. Her schoolwork was beginning to pile up and she still couldn’t focus on any of her online classes.

Landry is one of the thousands of college freshmen whose latter half of their senior year of high school was abruptly cut short because of the coronavirus (COVID-19) pandemic. Students and educators across the country were forced to make the shift to strictly online learning with almost no prior preparation. The switch to online learning hit Landry especially hard.

“I have ADHD, so it’s really hard to focus on online classes. Just in general my self-confidence went through the floor,” said Landry. “I was like ‘I’m not getting anything done, I can’t focus on anything.’”

Landry’s feelings of frustration and inadequacy were worsened by the reminder of all the things her class had missed out on. The senior dance that was supposed to be hosted on a boat as it cruised around Lake Winnipesaukee, and the class trip to Six Flags never happened.

“It was very disappointing. I made it four years through high school and then just didn’t get to do any of the stuff the past years got to do. It was sad,” said Landry.

These increased feelings of mental distress experienced by Landry are just a small example of a nationwide increase in mental health problems. It was found that 30.5% of college students reported that their mental health negatively affected their academic performance on a least six days during the past four weeks; an 8.6% increase from the prior fall, according to a survey conducted by the Healthy Minds Network for Research on Adolescent and Young Adult Mental Health and the American College Health Association of 18,764 students across 14 campuses.

Will Lusenhop, who is Clinical Assistant Professor of Social Work at the University of New Hampshire (UNH) and maintained a private practice until two years ago, explained the effects of the pandemic on mental health. Lusenhop cited that increased feelings of anxiety and depression caused by COVID-19 can aggravate pre-existing mental illnesses which then cause additional anxiety and depression. This traps people like Landry into feedback loops of mental distress.

Lusenhop also explained the possible long-term mental health effects of the pandemic through the diathesis model. The diathesis model tracks the trajectory of how disorders manifest by examining the relationship between people’s genetics and their environment.

“You’re going to have some people for whom depression and anxiety never have exhibited but the stress of [the pandemic] will essentially activate what may never have shown up,” said Lusenhop.

Beyond the stress caused by academic or financial factors, Lusenhop also pointed to how damaging prolonged periods of social isolation can be on an individual’s mental health. “Social interaction for humans is as fundamental as air,” said Lusenhop. “Our brain functioning does not do well if we are not in social interactions or feeling close to people.”

Junior marine biology major Bryson Torgovigsky experienced the effects of social isolation first hand after UNH shut down after spring break last semester and he found himself finishing his sophomore year in his childhood home in Washington, DC. There were suddenly 432 miles separating him from campus, his friends and his new girlfriend.

Torgovigsky occupied his summer by attending online classes, walking his dogs and occasionally participating in virtual Japanese conversation hours. His plans to visit Japan that summer had also been canceled. It would have been the third time Torgovigsky visited the country. He had already been part of a Tohoku earthquake relief program in 2017 and a social advertising campaign for the Japanese government in 2018.

Torgovigsky tried to keep in contact with others as much as possible despite the physical distance. “[My girlfriend and I] were very positive about the whole thing,” said Torgovigsky. “I called her every night unless one of us had another commitment.”

Torgovigsky’s return to UNH was also marked by inconvenient distance. Because Torgovigsky’s study abroad trip to New Zealand this fall semester was canceled, he was separated from his old roommate and placed in a single room in default housing. Torgovisky hopes to be able to switch dorms soon so he can live with his roommate again.

Nevertheless, Torgovigsky has noticed a vast improvement in his mental health both because of the increased social interaction and work environment. “Having to return to the high school idea of doing work at home was a bit of a strain,” explained Torgovigsky. “Being on campus, which I associate with college, schoolwork and everything, makes it much easier for me to sit down, focus on lectures and do work.”

However, while the return to campus for students like Torgovigsky means the return to a familiar environment and friends, the social isolation freshmen feel as they navigate meeting new people is made worse by COVID-19 social restrictions.

“You literally can’t get close to other people, like physically, so it’s impossible to have conversations with people,” said Landry.

Lusenhop believes that people’s mental health will continue to deteriorate as the COVID-19 pandemic goes on with no end in sight. This situation is made worse by the United States’ inadequate mental health services.

“Our mental health system is probably one of the better ones in the world,” said Lusenhop. “We have more of a culture of people getting therapy and therapists, but it certainly doesn’t meet the demand.”