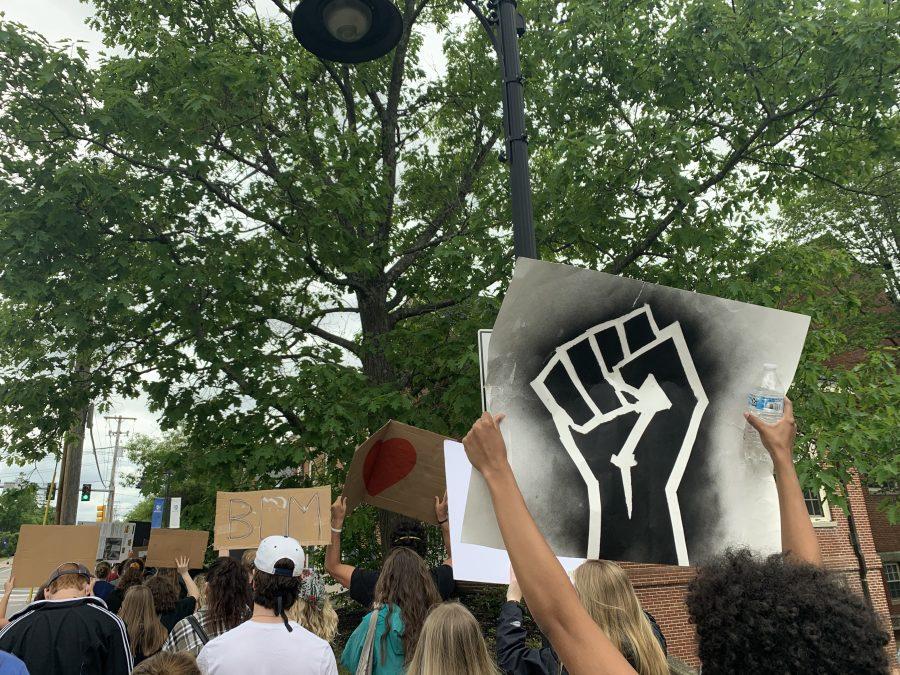 A Black Lives Matter protest and march at the University of New Hampshire (UNH) organized by UNH students was estimated by the UNH police department to have had about 300-500 people in attendance last Sunday.

The protest began at Thompson Hall, where college students spoke about their personal experiences with racism and called on everyone at the protest to make a change and not only listen to them, but to look at themselves and hold themselves and others accountable for their part in racism or being a bystander to racism.

The organizers put together a video on the scoreboard at the Wildcat Stadium, stating that at UNH “many serious racist incidents have been overlooked by students, faculty and staff.”

In the video, there was a slide from an anonymous UNH student that said that “UNH takes the opportunity to post pictures of the 1% to create this narrative of diversity that does not exist.”

Nelson Thomas, a speaker at the protest and a UNH class of 2020 graduate, said that one important thing about the future of the movement is to “make sure that it doesn’t end with today,” and said there needs to be zero tolerance for hate and bigotry going forward. He said that it starts with holding one’s self accountable and others accountable and more specifically, holding UNH responsible for their problems with racism.

“This is a powerful day and a powerful moment, we just did concrete change,” said Thomas.

Donnett Sackie, a speaker at the protest and UNH class of 2019 graduate, talked about the struggles that his black friends have experienced with the police.

“The thing about this is I’m an African, I’m not an African American. In Africa we respect police, we can even buy police which is not good in itself, but the police are there to protect you, they are there to make you feel safe – that is not what I have experienced in America,” Sackie said.

Elijah Lewis, a speaker at the protest and a UNH human development and family studies graduate student, said that something needs to change and explained that white people are both part of the problem and part of the solution. He said the protest showed that people were standing up and emphasized that this was something that was needed.

Lewis started his speech by listing off names of victims of police brutality such as George Floyd, Sandra Bland, Eric Garner, Natasha McKenna, Breonna Taylor and others.

“These people will never be forgotten and they will always be with us. The problem is that all the names that I listed could have been any one of my brothers or sisters, and that makes me weak to the core,” Lewis said.

Elana Zabar, a senior community and environmental planning major said that it is really important that white people should at this moment “be here and listen, just listen.”

“Some of us here may think that what they do will not have an impact but I’m here to tell you that it will and that whatever you do to help the cause will have an impact no matter what. We are going to be the change by the way we live, the conversations we have, and how we treat people day in and day out.”

Paul Dean, chief of the UNH Police Department, said that the police worked with the UNH students to make sure the peaceful protest went smoothly. They helped to provide masks, water, and a bullhorn for the march and worked with UNH athletics to use the scoreboard for the video. Chief Dean said three officers, including himself, were at the march. No arrests were made and it was a peaceful protest and march.

Julian Maduro, a speaker at the protest and a UNH student talked of her personal experiences with racism. She started her speech with a statement that her mother told her growing up.

“Don’t be angry, don’t cry, don’t show emotion, be a statue, don’t talk about politics, don’t wear a hoodie, straighten your hair, if they say something that hurts you, that butts you, just laugh, don’t make anybody uncomfortable. These are some things that my mom used to tell me growing up,” Maduro said.

Since that moment, Maduro has developed anger towards her mother’s statement, but also a greater understanding of it as well.

What I didn’t hear is the black mother in her chest cracking at the thought of her children making themselves into bigger targets.”

Marianna Miller is a junior UNH environmental conservation and sustainability major. She said that “it is great that so many people showed up” and emphasized that one important thing that people need to do: educate themselves on issues, and as a white person, acknowledge white privilege.

Emma Pryor-West, a speaker at the protest and UNH student said in her speech, “Think about your life, do you ever think, ‘she’s only here because she’s black?’ Was that ingrained into our society? That they don’t deserve to be here because they’re black? Their skin makes them thugs, do I look like a thug? I can barely kill an ant. I’m serious, I don’t like them. But, every time we sit here, we work harder, we work stronger, because we know that when we go out if we don’t have a perfect 4.0, they’re not going to look at our resume. We know if our names are written on the resume, they’re going to throw it out. We know our teachers look down at us and we fear that, we fear the police, we fear our peers’ silence, we fear our professors, we fear our administrators, because the system is against us.”