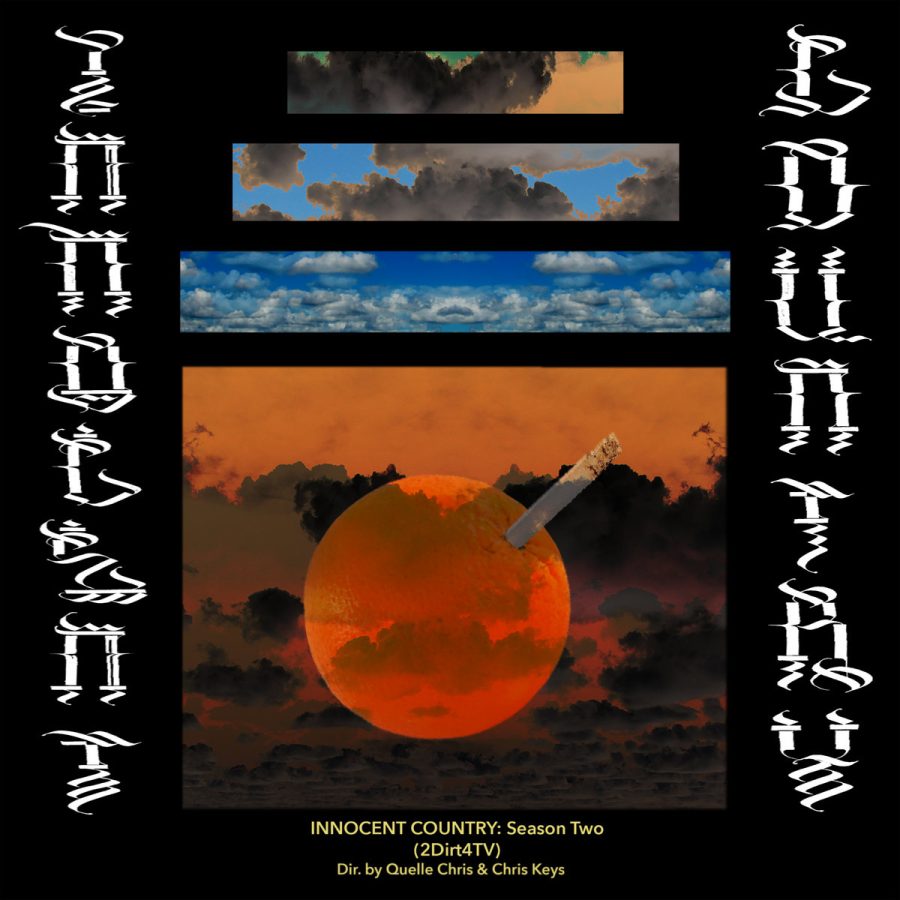 Fate, kismet, destiny. It’s got a smorgasbord of different names, but countless people seem to believe in it; this idea that everything happens for a reason. There’s no scientific way to prove it, or to distinguish if it’s actually a sham and everything is just a series of never-ending coincidences. As the beloved Forrest Gump once said, “I don’t know if we each have a destiny, or if we’re all just floatin’ around accidental-like on a breeze, but I think maybe it’s both. Maybe both is happenin’ at the same time.” However, if fate ever was or is real, then it had a heavy hand in the timing and release of Quelle Chris & Chris Keys’ “Innocent Country 2,” the duo’s eloquent, ethereal follow-up to their 2015 release that displays a tender refusal to give up despite life’s hardships and a pulsing belief in the indefatigable spirit of art and keeping close to your loved ones through trying times.

According to Quelle Chris, “Innocent Country 2” was created long before the pandemic tore across America, forcing people into their homes, away from their jobs and into subsequent difficult situations. COVID-19 has placed many hardships on the shoulders of hundreds of thousands of people, closing down businesses, threatening the health of family members and accumulating heaping amounts of stress onto our already-weary brow lines. And just like clockwork, in the middle of one of the strangest and most strenuous years in recent memory, Quelle Chris & Chris Keys released their jazzy brainchild on April 24 like a heaven-sent reminder to keep faith despite mounting duress.

“Innocent Country 2” is brimming with heartfelt, diaphanous production, with almost every instrument on the album being played and produced by Chris Keys. From the bouncy piano rhythms of “Living Happy,” to the touching flute riff on “Graphic Bleed Outs,” to the hissed lo-fi sermon of “Mirage,” Keys constructs an aural landscape that embraces the listener with the warmth of a grandmother’s hug. It’s jazzy, slick, comforting, original and beautiful—and most importantly, it’s the perfect backdrop for a melancholic, yet hopeful Quelle Chris, who gives one of his most serious and confessional performances to date.

Quelle Chris has always been a hip-hop weirdo; he’s one of those people that you’re thankful exists because of his refusal to color in the lines. From the intricate quirkiness and self-love of 2017’s “Being You is Great, I Wish I Could Be You More Often,” to the biting social commentary and humorous satire of 2019’s “Guns,” the Detroit-bred artist has always displayed an innate ability to only be himself despite the trends of the present day. Often showing shades of Quasimoto-DOOM-Soulquarian-Stones-Throw influence, Quelle borrows from this storied lineage but stays uniquely himself, crafting enveloping albums that look reflexively at both his flaws as an individual and the problems with our society at large. With “Innocent Country 2,” Quelle shows us yet another side of his ever-evolving artistic toolbelt, this time opting for neo-soul-esque, collaborator-filled jam sessions with Chris Keys that feel exceedingly natural and gorgeously optimistic, even while acknowledging the pain that he’s attempting to parse through in his attempts to live a fulfilled life.

On the indubitably fun “Living Happy,” Quelle dies in the beginning of the song, ascends to heaven where he does every dance trend imaginable (including the Charlie Brown, the stanky leg and the Cat Daddy) and reflects on a carefree youth where his uncle gave him the advice to “let some feelings go” in order to live happily. Meanwhile, on the Nelson Bandela and Mosel-assisted “Black Twitter,” the three artists confide in the pride of black culture with playful bars about their love of all things black, from coffee and tea to birds and cats, to heartwarming proclamations like “Beautiful black baby boy, the world is ours / Beautiful black baby girl, all twinklin’ stars.” Across the album, there’s this gleaming sense of hope and belief in one’s identity, family and creativity despite the setbacks looming in the road ahead, which include breaking up with the evil ways of the world (“Outro / Honest”), doubters and critics (“Make It Better”) and even capitalization of the black experience (“Bottle Black Power BUY THE BUSINESSS”). Regardless of these difficulties – and maybe because of them – Quelle, Keys and their many collaborators double-down on a message of beatific soul-power and the healing salve of art.

“Innocent Country 2” reaches its peak and sustains a streak of elevated magic across the five-track-stretch of “Sudden Death,” “Make It Better,” “Graphic Bleed Outs,” “Mirage” and “When You Fall…” to close out the album. In these five songs, Quelle and Keys dig at the pith of the album with thundering moments of lyrical sincerity and spiritual, out-of-body instrumentals. There are 10 additional artists featured across these five songs—yet somehow, each act is slotted into the mood and message of each song like a hand in a glove, never feeling out of place or adding commotion to the listening experience. “Mirage” may be the best example of their simultaneously light and heavy-hearted musical conjuring; Earl Sweatshirt and Denmark Vessey trade sanguine verses about the fragility of time (“The bitter sweetness of times I wish to capture / Abandon reason for the slime of greener pastures”) and believing in oneself above all else (“The sweetest get-back is being completely free, completely me / The smell of burnt sage, let the seasons reap / Don’t overthink it, breathe deep frequently”) before Big Sen delivers a sermon-like spoken word performance over the bare crooning of Quelle Chris’ vocals to top it all off. It all amounts to a touching, heart-warming, incandescent light-at-the-end-of-the-tunnel opus that feels like, “a rap clinic held inside a church now converted into a basement speakeasy, where dime sacks and bootlegged rye were given to every parishioner,” as Mello Music Group’s website coins it.

“What’s gon’ come to pass is what’s gon’ come to pass. All that voting and all that s***—you can do that, that’s cool, but that ain’t gon’ stop it. It’s—It’s already on the way, you know what I’m saying? Just buckle up. Have a good time, you know? Security is largely a superstition. It does not exist in nature. Life is either a grand adventure or nothing, baby. Go have your adventure, ’cause I’m having mine.”

Quelle Chris and Chris Keys could not have released “Innocent Country 2” at a better time. Confiding in art – getting lost within the walls of our own head with the assistance of an enveloping piece of music – is extremely important to the soul when being pushed to its limits. The expression of pain and endurance and elation and tear-jerking moments in art is all we have; it’s an avenue to both communicate feelings and to receive them, to feel catharsis in our shared humanity through better or worse. To make and consume art is to feel human when external circumstances threaten to take that away. When the world needed honest and spellbinding art more than ever, Quelle Chris and Chris Keys delivered a poignant, timely, timeless, soulful deluge for the ages that won’t be forgotten anytime soon.