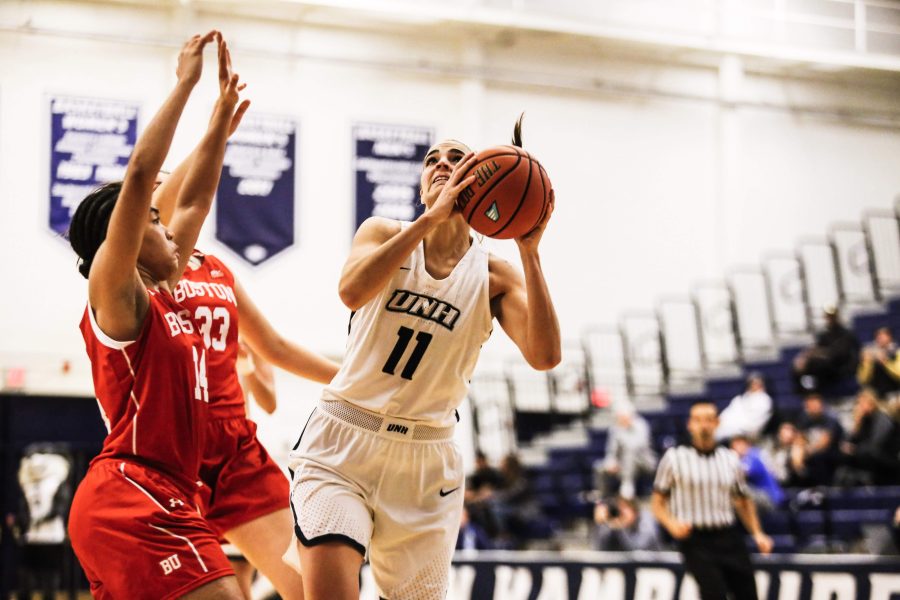 The 2019-20 campaign for the UNH women’s basketball team was a roller coaster filled with winning streaks, losing streaks and a lot of mediocre play in between.

The Wildcats finished the season with a 10-19 overall record and a 7-9 record in America East Play, good for fifth place in the conference.

One of the few consistent performers for the ‘Cats was Ashley Storey, the players’ vote America East Player of Year, and she was consistently dominant. The decorated senior led her squad in scoring and rebounding, averaging 16.3 and 5.8 in the two respective categories.

The Cumberland, ME native also ended her stint at UNH with a career high of 33 points against CCSU on Dec. 8. The accolades didn’t stop there, as she became a part of the 1,000-point club on Feb. 26 against UAlbany, and she went on to rack up 1,044 points in her illustrious career.

Storey’s strong last season in Durham didn’t come as a surprise to anyone who followed the team over her five-year career. She had been on a steady rise since her first season in a Wildcat uniform, as she came in and started 17 of the 30 games she played in. This was on a 26-6 Wildcat team that got a bid into the National Invitation Tournament (NIT).

In her second season, she remained consistent and continued to refine her all-around game as she didn’t have much of a scoring burden on her shoulders. UNH head coach Maureen Magarity thought that this time was beneficial and essential for Storey’s development as a player.

“Ashley had come in as one of the top local players that we’ve recruited that decided to come to UNH and she developed into such a tremendous scorer. Her first and second year she was more of a roll player that learned from Kat Fogarty and Carly Poe…she was always extremely determined, especially with her injuries.”

Injuries to her shoulders, foot and knee forced her to redshirt during her junior season and allowed her to polish her game and come back as a dominant player. Despite only playing in 15 games she averaged 17.1 points and 6.1 rebounds in the 2018-19 campaign. After this surge, she was widely regarded as one of the top players in the America East.

“She had to redshirt with her shoulders and ACL, so to come back from that, her career was special for sure,” Magarity said.

Storey has seen many statistical achievements come her way over her collegiate career, but what she is best known for in Durham is her leadership. She was the consummate teammate, and she was never selfish with her play. Her encouragement of teammates and selfless passing may have been the best aspects of her extremely versatile arsenal.

Junior guard Amanda Torres has played with Storey for her three years as a Wildcat, and she has been appreciative of the senior’s leadership to say the least.

“It’s been great to play with Ashley and she has really helped me with my confidence so much. She’s the first one to yell at me and tell me to be more aggressive in a good way. She’s just as hard on me as coach (Magarity) is on me and that has been what I need.”

This is just one example of Storey’s impact on the UNH women’s basketball program, as she has helped countless teammates and coaches throughout her basketball journey. Her legacy as a great player and even greater teammate will be forever cherished by the Wildcat community.