The Adventures of Tracy and James: Chapter 7 – Truth in Smoke 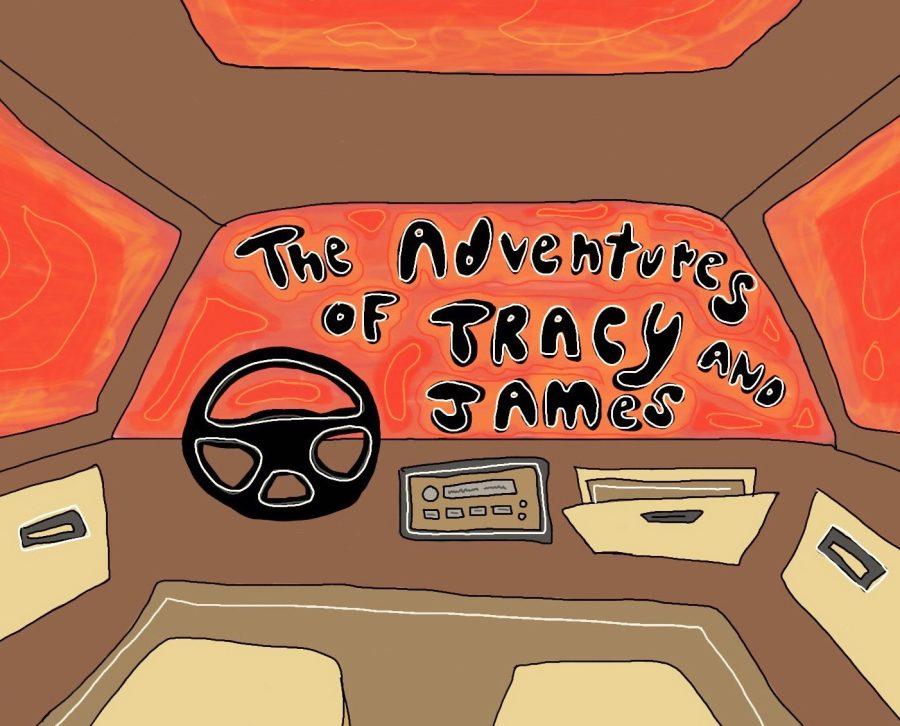 Previously, we left our heroes inside a ginormous treasure room searching for a special ruby when Ozburtle the Wizard begins to mysteriously turn into treasure himself. Will our heroes be able to save their friend and find the ruby? Find out below!

“Right you are ZoopZoop, right you are,” Ozburtle the Wizard says as his wrists morph into pearls. “Do as the creature says.”

“I get more of a feeling from ZoopZoop,” Tracy says, “as opposed to a direct translation.”

“Well, that’s most unfortunate,” Ozburtle the Wizard says as his forearms begin to diamond. “Tracy, take the Eternal Flame of, I can’t quite remember the name, and place it next to my diamonds, I mean my arms. Quickly now.” Tracy runs over and lays the flame on the pile of treasure that is now blending into Ozburtle’s body. ZoopZoop leaps off Tracy’s shoulder and lands in front of Ozburtle’s face.

“Beep!” ZoopZoop roars. ZoopZoop spins around and shoots out his cherry-red bubblegum tongue into the flame and brings a ball of green fire into its mouth. ZoopZoop’s once solid emerald green color now shimmers between gold, red, purple and green like an overstimulated mood ring as it squishes over to Ozburtle’s arm and sprays a cloud of purple smoke out of its mouth. The jewels that began taking the place of Ozburtle’s arm transform back into skin and bone and probably magic blood.

“Wonderful ZoopZoop! Now the other please,” Ozburtle the Wizard says. ZoopZoop roars again and repeats the process. “Thank you dear ZoopZoop,” he says as he stretches both of his arms out and notices a diamond lodged in the middle of his left hand. “Well that wasn’t there before,” he says as he clinks it with his right pinky finger, “but it feels like my hand so whatever. It’s like they say, ‘What doesn’t turn you into treasure makes you stranger,’ or something like that.”

“That was amazing,” James says. “What did it feel like?”

“You know,” Ozburtle the Wizard says as he scratches his chin, “it felt kind of nice, like soaking sore muscles in a hot spring. The turning into treasure part was excruciatingly painful like you wouldn’t believe. It was awful.” Ozburtle stares at his hands.

“Are you okay?” Tracy asks. A moment of silence stretches around them. “Ozburtle?”

“Yes, just awful. Now that we have that taken care of, I’ll say that when you’re rummaging through the piles, looking for that ruby, don’t – and I repeat – don’t…” Ozburtle says and wanders over to another pile and begins his search again.

“Come on James,” Tracy says. She picks up the flame and, grabbing James by the shoulder, leads him over toward a large marble statue of a kneeling knight. “You take this pile here and I’ll hit up that pile a few feet over there.” She points.

“But what should we look out for? Ozburtle just stopped talking,” James says.

“So,” James replies, “what was the warning?”

“You should be careful with everything James. Death isn’t just something invented to sell movies. Besides, you manage to avoid dying every day on Earth, so far, so no worries! Okay champ? If you start turning into treasure, ZoopZoop here will help you,” Tracy says.

“Right, if ZoopZoop feels like it,” Tracy says. Her and ZoopZoop skip off to their mound of gold.

“I feel bathed in reassurance,” James says. He picks up a gold coin and inspects it like a cartoon character with one of those jeweler’s monocles. The coin is warm. An image of a barn owl is etched on one side with a bizarre lettering running underneath. The other side is blank. James picks up another coin and holds both next to each other. They’re identical coins. He puts the first coin in his pocket and drops the other.

This rummaging goes on for quite some time. Tracy and ZoopZoop walk over to James.

“I never thought I’d get tired of gold. I don’t think I could get more bored with gold,” Tracy says.

“I stand corrected,” Tracy says and sits down and lays the torch in front of her. ZoopZoop hops off her shoulder and begins hopping in front of the flame. ZoopZoop cycles through various shimmers of skin color as before.

“At least ZoopZoop seems stoked about everything. Or at least that flame,” James says. ZoopZoop swallows more of the flame and shoots Kaleidoscopic smoke swirls out of his mouth. A patch of the multi-colored smoke covers some pearls and a piece of a metacarpal bone morphs from the precious stone.

“Ozburtle, stop! I have an idea,” James says. Ozburtle pokes his head out of a pile that he is completely submerged within.

“What is it lad, spit it out, don’t keep it secret, tell me what’s on your mind,” Ozburtle the Wizard says.

“Well, looking for this ruby is sort of like finding a super expensive needle in a gold haystack,” James says.

“I see,” Ozburtle the Wizard scratches his beard, “and,” he says.

“And, since ZoopZoop can turn the treasure back into bone with his phantasmagoric smoke, couldn’t we use ZoopZoop to…” James says.

“Finish it James, what could we use ZoopZoop to do?” Ozburtle the Wizard asks.

“Oh, I thought, it looked like you were going to finish what I was saying as if the idea was appearing in your head too,” James says.

“Well I’m not, I didn’t, so out with the plan,” Ozburtle the Wizard says.

“Brilliant,” Ozburtle the Wizard says, “sort of spooky and ghoulish too.”

“That’s great James,“ Tracy says and asks, “are you up for it ZoopZoop?”

“Beep! Beep! Beep!” ZoopZoop roars. The mysterious desert creature laps up a big ball of flame, hops off Tracy’s shoulder, and starts reanimating the first treasure pile into a corpse.