On the Spot with drag queen Lady Ro 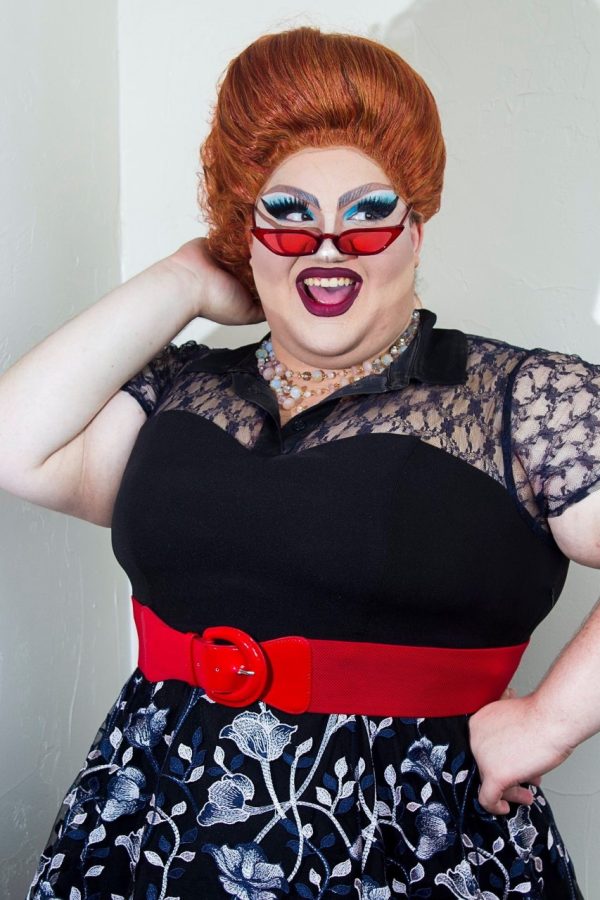 Chubbuck began performing as Lady Ro early in their college career. They accredit the idea to a former boyfriend.

“He asked me if I’d ever considered doing drag because at the time, I was playing Miss Andrew in ‘Mary Poppins,’”Chubbuck said. Miss Andrew, Chubbuck explained, is a character only in the musical version.

Chubbuck was at first apprehensive to the idea. Drag is not as common a performance style in New Hampshire versus urban areas like New York City. After the boyfriend mentioned the name of a Manchester drag bar, “I called them on the phone and I was like ‘How do I get into your drag shows’?” Chubbuck said.

Chubbuck went through a couple iterations, and multiple names, before arriving on the present-day Lady Ro persona. The names included Rose Gold, Girl Robbie and Esther Martini, the last based on a character Chubbuck already had developed.

“Then I considered Lamp, because I knew I wanted to be funny.”

While Lamp remains a strong contender for a new name if Chubbuck ever changes the name of their drag persona, for now they are Lady Ro. Chubbuck’s best friend came up with the name, based upon “RoCho,” a name Chubbuck used online before they had come out to their parents.

Lady Ro’s persona and the performance Chubbuck does as Lady Ro is not the drag commonly known from hit TV show RuPaul’s Drag Race, which Chubbuck referred to as “pop drag” and “slay drag.” These types of drag are the drag styles with daring dances and immaculate costume and performance. Lady Ro is more “‘kooky and stupid.’”

While Chubbuck acknowledged Lady Ro’s persona is still, as many others’ personas, in development, they point to a key moment that defined the drag queen Chubbuck wanted to be. This was in late 2018, early 2019, when Netflix film “Bird Box” came out.

Chubbuck was inspired to use “Bird Box” in a unique way as Lady Ro.

“What I had come up with is to actually perform a number with a real blindfold and to not be able to see what I was doing while I was performing,” they said, laughing. Much of the movie centers on the protagonists being blindfolded. Chubbuck had a friend mix the Disney song “Just Around the Riverbend” with line dancing classic “The Cha-Cha Slide.”

Being a drag queen, which could become Chubbuck’s full-time career, has not come without its challenges. Chubbuck spoke of the many times audience members touch them, and the scolding they give the audience member in return. Many of Chubbuck’s day-to-day challenges also stem from their gender identity: “I find as a genderqueer person that I’ve experienced a lot of anxiety,” they said, citing public restrooms and pushback from their outfits.

On one occasion, when a man told Chubbuck to shave their chest for drag, Chubbuck as Lady Ro responded: “You can take your opinion, and you can file it right into the trash.”

“As a drag queen, though there’s the customer service aspect of it, where it’s everything you do is for an audience… you still get a little leeway, where if people are going to be rude to you, you are licensed to be rude to them back,” Chubbuck said.

One of the largest challenges Chubbuck faced recently, however, was not just as a drag queen: First, Chubbuck took the spring 2019 semester off on medical leave. One reason was depression from the passing of Stephanie Patrick-Chalfant to cancer towards the end of the fall 2018 semester. Patrick-Chalfant managed the costume shop of the College of Liberal Arts Department of Theatre and Dance, teaching costume related courses. When first entering UNH, Chubbuck had been pursuing costuming study.

“Spring was really hard because I was grieving, and I also unknowingly at the time had cancer myself,” they said.

After battling to get a timely appointment with the urologist, Chubbuck was diagnosed with testicular cancer the following summer, 2019.

Upon being diagnosed, “’I immediately started crying. But the first thing I said through my tears was ‘oh my god, this is going to be so f***ing funny.’” This Chubbuck told their physician, explaining to the physician that “Testicular cancer is the funniest kind of cancer. It’s going to be so funny.” Lady Ro also does stand-up comedy, and recently, is part of a puppetry show.

One of the first comedic acts was moving an appointment because Chubbuck had plans. That attitude of not derailing their life for cancer dominated Chubbuck’s recovery process. Chubbuck was rehearsing for the musical “Young Frankenstein” when chemotherapy began, and later auditioned for “Elf the Musical,” after almost deciding to not audition.

Still, “I was exhausted, and I was constantly very sick from the chemotherapy,” Chubbuck added. “I find that if you really believe in the things and your ability to do it, and you want it, you’re going to get it. But theater and drag really fuel my soul, and they really, they really help me stay in a mentally healthy place. So much so that theater and drag accidentally saved my life.”

This past November, still on medical leave, Chubbuck’s chemotherapy port got infected. Their body temperature soared to 106.3, they said, noting that 100.5 was supposed to be the criteria for mandating an emergency room visit—but they were too preoccupied with the televised “Little Mermaid Live!”

In the emergency room, “I started to completely fade away from the world.  I knew I was in a hospital bed but everything was kind of grey. And all of a sudden there’s this light. And I was like ‘I thought this was only in TV shows,’ and my first thought was like ‘oh thank god I guess I wasn’t gay enough for hell.’”

After nearly resigning themselves to the situation, “The Little Mermaid Live!” returned to their mind. “I came shooting up in bed…and I put my hand on either side of the railings of the hospital bed, and I said, ‘I haven’t played Ursula yet.’”

To the shock of their mother, Chubbuck repeated: “‘I haven’t played Ursula yet. I can’t go. Not yet.’”

A week in the hospital, and Chubbuck closed out “Elf the Musical.” Chubbuck was declared cancer-free Jan. 14, they said, and is looking forward to the two-month anniversary this coming Saturday.

Also, in January, Chubbuck auditioned for “The Little Mermaid” at a local New Hampshire theater. The audition results came in, and now, not only is Chubbuck Lady Ro, they are Ursula.