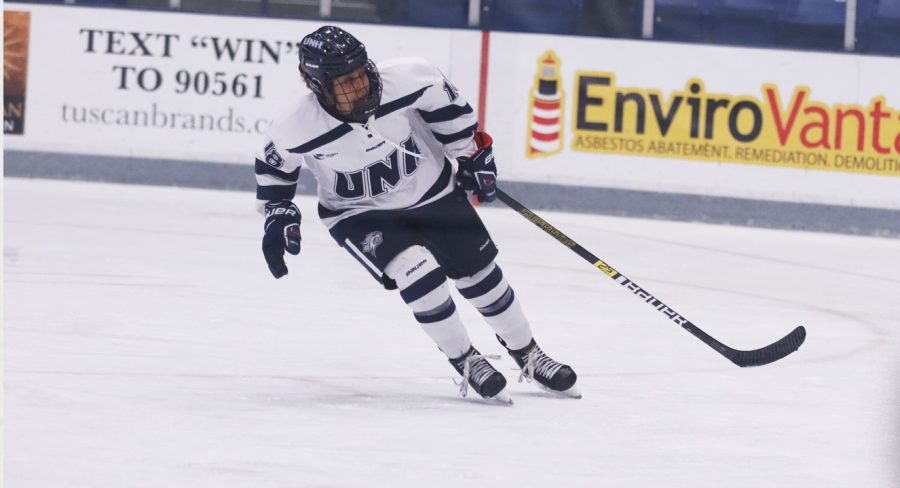 The Wildcats successfully advanced to the Hockey East semifinals for the first time since 2010 with two wins over the Providence College Friars. There was no need for the third game as the Wildcats won 4-2 and then 1-0 at Providence. Sophomore goalie Ava Boutilier’s performance helped her earn the Conference Goalie of the Month as she posted a 4-2-1 record through February. She was also named Hockey East Defensive Player of the week and NCAA second star of the week for saving 58 of 60 shots and tallying an assist.

The Wildcats were lifted in game one by two goals from junior forward Grace Middleton, one of which came on the powerplay. UNH scored four goals in a row, three in the second period and held on to take the series lead. Boutilier stopped 23 of the 25 pucks that came her way.

The Wildcats got the scoring started halfway through the first when captain and senior forward Taylor Wenczkowski ripped a shot off of a faceoff win by first-year forward Annie Berry.

Just two and a half minutes later Middleton struck with her first of the game. Boutilier gave the puck to captain and senior defensewoman Tori Howran behind the Wildcats’ net. Howran skated the puck up the length of the ice and crossed a pass into the slot for Middleton to tip in, making it a 3-0 game, prompting the Friars to change goalies after only 13 Wildcat shots on net.

The Wildcats scored their final goal 11:56 into the middle frame as Middleton deflected a shot from Rickwood, senior forward Nicole Dunbar was credited with the secondary assist.

It did not take long for the Friars to respond, scoring their first goal just 48 seconds later. Senior defensewoman Whitney Dove ripped a slap shot off a pass from senior forward Meghan Rickard, to put them on the board.

They were not done yet though as the Friars crept back to within two after a powerplay goal of their own. Rickard scored 6:36 into the third with assists coming from first-year defensewoman Lauren DeBlois and first-year forward Bailey Burton.

The Friars also went all-in by pulling the goalie for an extra attacker in the final minutes of the game, but the Wildcats held on to win the game and take the advantage in the series.

Game two was also taken by the Wildcats but this time in a close 1-0 game, benefitting from a 35 save shutout by Boutilier. The Friars brought their offensive game, outshooting the Wildcats 13-4 in the first and then 14-5 in the second but Boutilier stood tall and gave her team the chance to win.

She was aided by a whopping 25 blocked shots, with 10 different players recording at least one block, with 10 of them coming in the third period. Leading that was junior defensewoman Maddie Truax with six blocks, five of them coming in the third period. Warren, Howran, Rickwood, Wenczkowski and junior defensewoman Julia Scammell all recorded multiple blocked shots as well. Warren had four, Howran had three and the others had two blocks.

Howran also scored the game’s lone goal 12 minutes into the second period. Sophomore forward Lauren Martin put a shot on net and the rebound bounced right out to Howran who was down low. It was only the second goal Howran scored this season, but it was a huge one as it held up as the game winner and series clinching goal.

The Wildcats will play in the Hockey East Semifinals against the University of Connecticut Huskies on Saturday, March 7. They beat the Huskies in the season series 2-1 but were outscored 4-3 during the regular season.